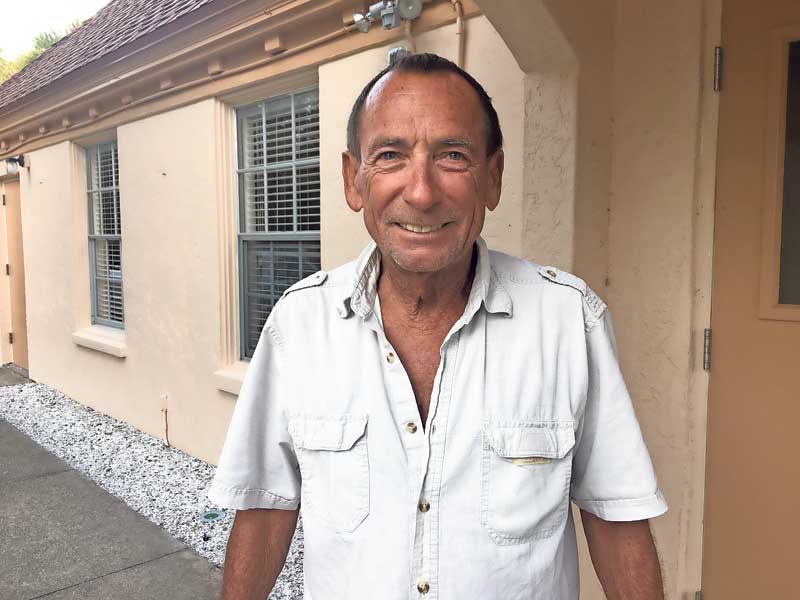 “When I started, one of the things I promised myself was I would be civil, respectful and honest,” he said. “That’s what it’s all about to me.”

Woodland has served as commissioner for 14 years. Aug. 1, he announced he is running for re-election — Woodland and two other commissioners are coming to the end of their two-year terms in November.

Commissioner Doug Copeland said he hasn’t decided whether he will seek re-election. Commissioner Carol Carter said she is “90 percent sure” she will, but has not decided on a platform or agenda. Both have served since 2014.

Woodland said his goal is to continue as a public servant. “I don’t have a political bone in my body,” he said.

He said during his time in office, he’s enjoyed having dialogues and debates to work through disagreements. He added that in a small community, “people are much more vocal … because they can make a difference, and that’s healthy.”

“As long as you have dialogue, at least we’re working together,” he said.

One of the major issues affecting the city, Woodland said, is the debate about the Center of Anna Maria Island, which is located on city property on Magnolia Avenue.

Woodland said he has no immediate solution to the center’s financial woes, but he’s heard in debates and private discussions that “everyone wants the community center to succeed.”

“I’m sure there’ll be some issues that come up in the election process,” Woodland said. “If I disagree, I’m going to be vocal.”

People who want to run for city commission must either obtain signatures from 1 percent of registered voters in the last general election or pay a qualifying fee.

Anna Maria had 1,167 registered voters in the November 2016 election, so 12 signatures are needed.

Candidates also must have resided in Anna Maria for two years.

In Anna Maria, where elections are nonpartisan, commission candidates must pay a fee of 4 percent of the annual salary, totaling $192.

To register, a person must open a campaign account and select a campaign treasurer before submitting qualifying materials. Candidates also must submit an oath of loyalty, a statement of candidate and a statement of financial interests to the Manatee County Supervisor of Elections office.

The statement of candidate must be filed within 10 days of opening the campaign account.

A candidate must publicly declare candidacy via newspaper, radio or television.