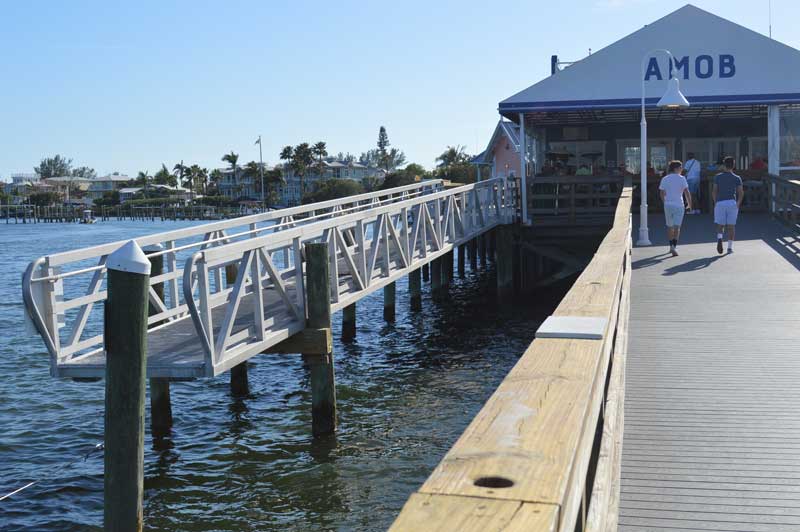 The gangway at the Historic Bridge Street Pier in Bradenton Beach awaits a floating dock to service tour boats and their patrons and other visitors arriving by boat. Islander File Photo: ChrisAnn Silver Esformes

Bradenton Beach has waited more than a year for a new floating dock at the Historic Bridge Street Pier.

And shipment is pending.

It then would take four weeks to arrive at Port Everglades in Fort Lauderdale.

However, city treasurer Shayne Thompson noted the bill of lading provided with Miller’s email was unsigned and lacked a shipping date.

The contract between Technomarine and the Bradenton Beach CRA provides for staged payments, including when the dock ships, but Technomarine is requesting a $29,691 payment before shipping takes place, according to Thompson.

Thompson told Technomarine representatives the CRA will only issue a check upon receipt of a completed bill of lading.

Technomarine representative Anna Bennett responded by sending another unsigned BOL, indicating the CRA will receive a signed BOL when the dock ships. “That’s just the way it works,” she wrote.

Additionally, she suggested the CRA send Technomarine a postdated check.

Thompson responded that the “city is not in the practice of issuing postdated checks,” but would expedite the check once they receive proof of shipment.

As of press time for The Islander, Technomarine had not responded to Thompson.

After the payment of $29,691 is made, the remaining balance on the dock will be $9,288, due to Technomarine within 30 days of installation.

The total cost for the dock is $119,980 — half of which was matched by Manatee County tourist development tax dollars.

“At this point, we’re still moving forward with hopes this project is soon brought to completion,” Speciale said July 24.

The most recent of four delayed schedules from Technomarine indicates installation will be carried out by Sept. 12.

The next Bradenton Beach Community Redevelopment Agency meeting will be at 9:30 a.m. Wednesday, Aug. 1, at city hall, 107 Gulf Drive N.