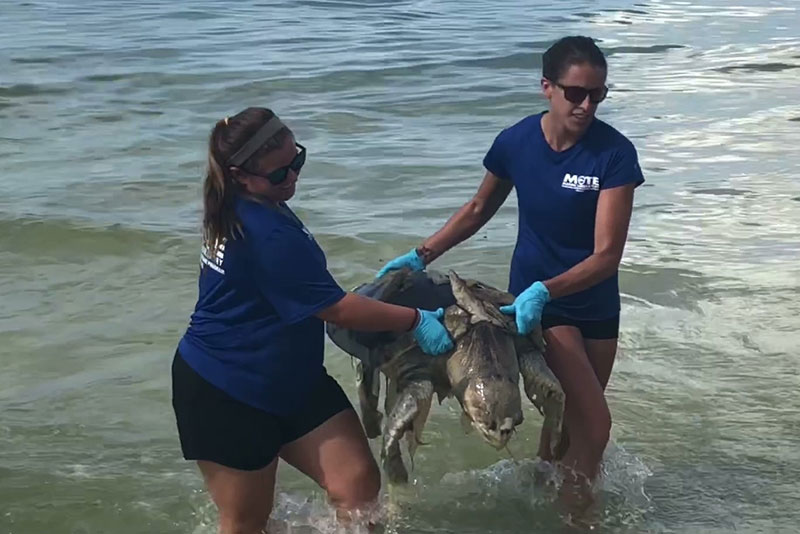 Ashley Lysaught, left, and Jessica Blackburn, stranding technicians at Mote Marine Laboratory in Sarasota, retrieve a dead sub-adult Kemps ridley sea turtle Aug. 22 from the water near Sycamore Avenue in Anna Maria. It was one of 135 dead sea turtles reported as of Aug. 24 to Mote since the Sarasota-Manatee outbreak of red tide began July 20. Islander Photo: ChrisAnn Silver Esformes 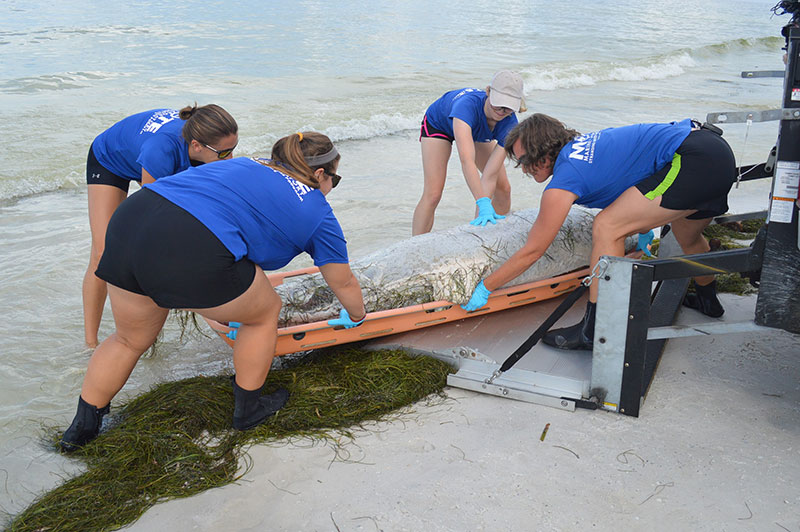 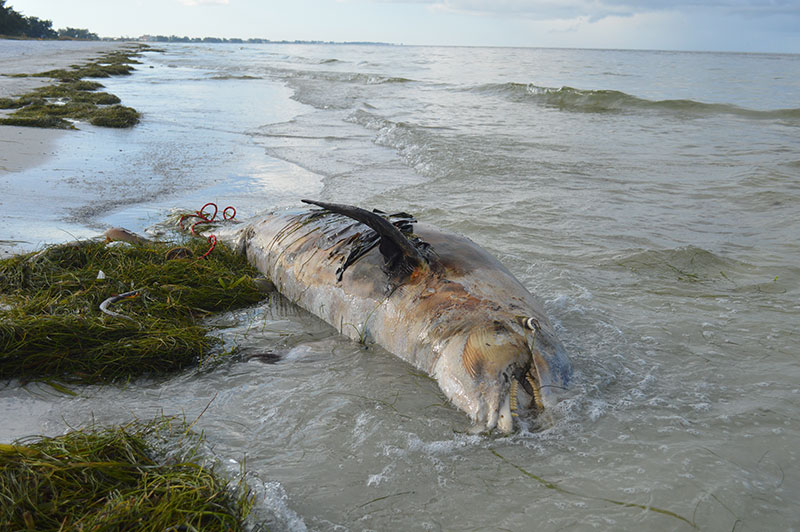 A bottlenose dolphin lays dead Aug. 22 in the surf near the Sycamore Avenue beach access in Anna Maria. It was the first reported dolphin dead in Manatee County — presumably — due to red tide. Manatee, marine life fatalities add up A dead manatee floated up in Anna Maria Sound Aug. 26 to the dock at the Sunrise Lane home of Holmes Beach Commissioner Judy Titsworth. She said there were only a few dead fish on the waterway, but red tide is suspected in the manatee death. She said a team from Mote Marine Laboratory was on its way to collect the manatee. Islander Courtesy Photo: Judy Titsworth 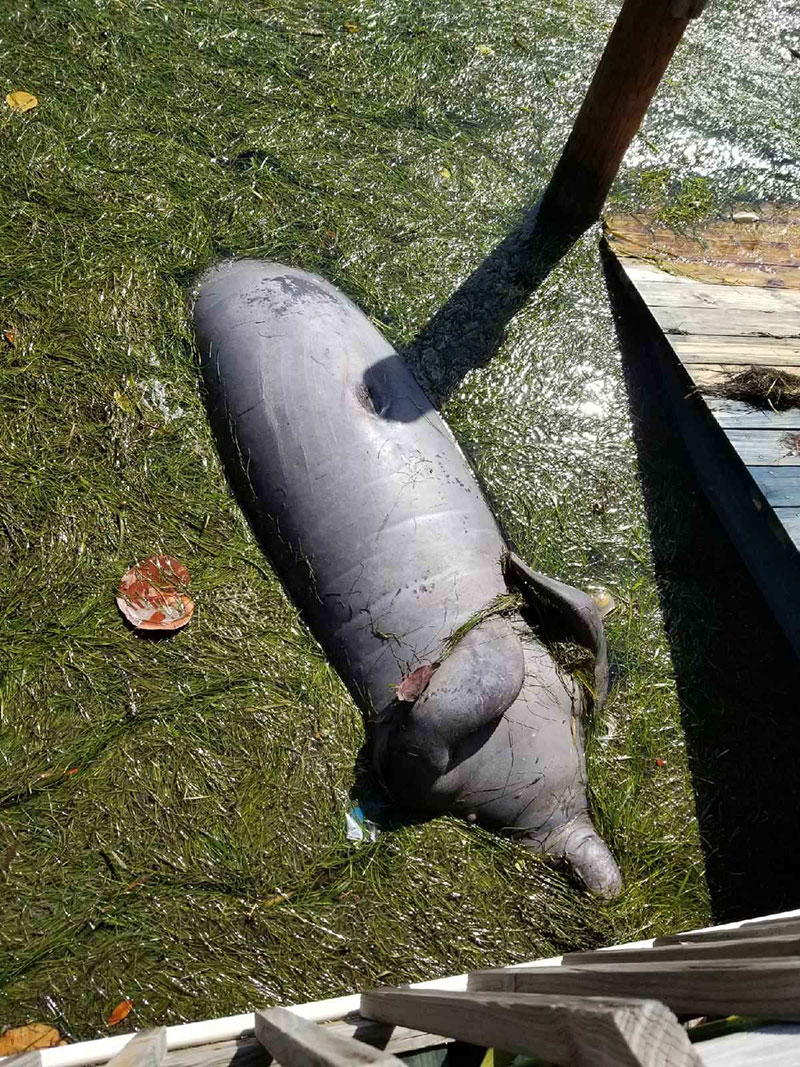 Manatee, marine life fatalities add up A dead manatee floated up in Anna Maria Sound Aug. 26 to the dock at the Sunrise Lane home of Holmes Beach Commissioner Judy Titsworth. She said there were only a few dead fish on the waterway, but red tide is suspected in the manatee death. She said a team from Mote Marine Laboratory was on its way to collect the manatee. Islander Courtesy Photo: Judy Titsworth

Except for murky water in the Gulf of Mexico, Aug. 21 looked like a normal beach day on Anna Maria Island.

Reports of respiratory irritation from humans had decreased from the week before and after the Manatee County beach tractor cleared the beach that morning, few dead fish washed ashore.

However, l2 hours later, the wind started blowing from the west-southwest, bringing high levels of Karenia brevis — the harmful algae bloom known as red tide — to the waters surrounding the island, according to the Florida Fish and Wildlife Conservation Commission red tide report.

The first bottlenose dolphin reported dead in Manatee County since red tide started drifting north toward the island the first week in August was found Aug. 21 on the beach near Sycamore Avenue in Anna Maria.

As of Aug. 22, 17 dolphins had died in the waters surrounding Sarasota County, according to Gretchen Lovewell, Mote Marine Laboratory stranding investigations program manager.

The adult male dolphin found in Anna Maria was reported to Mote’s stranding hotline and, soon after,  representatives took the remains Aug. 22 to a lab for analysis, including brevitoxin levels — the toxin found in red tide.

Manatee County Sheriff’s Office deputies, arrived at the beach near Sycamore and assisted the Mote team with the dead dolphin, and also noticed a dead and decomposing sea turtle floating in the water about 40 feet from shore.

“Nothing is unusual right now,” Lovewell said Aug. 22. She said loggerheads, greens, Kemps ridleys and even two hawksbills — which she said she had not previously seen in the nine years she’s been with Mote — were among the 135 sea turtles reported dead in Manatee and Sarasota counties since July 20 due to poisoning from red tide.

The Kemps ridley, along with a juvenile green sea turtle found dead in the water near the 1800 block of Gulf Drive North in Bradenton Beach at about the same time, were buried after collecting data, including notations on size and species.

The decomposed state of the dolphin indicated it had been dead for at least several days, said Lovewell. She added that researchers would take samples from its liver, kidneys and lung and check stomach contents to see what it had eaten.

The dolphin’s dorsal fin was missing, so it could not be checked for a freeze-brand — a method used by researchers with a Mote-Sarasota Bay dolphin study to brand and identify local dolphins. The study has been ongoing for some 40 years.

Lovewell said its hard to tell where the dolphin came from, since people have been reporting dead dolphins from as far as 16 miles offshore.

She said geneticists still could determine if the animal was related to the resident bottlenose dolphin community.

“We just try to do the best we can,” Lovewell said. “We are trying to learn as much as we can from all these guys so that we can help the ones that are still out there.”