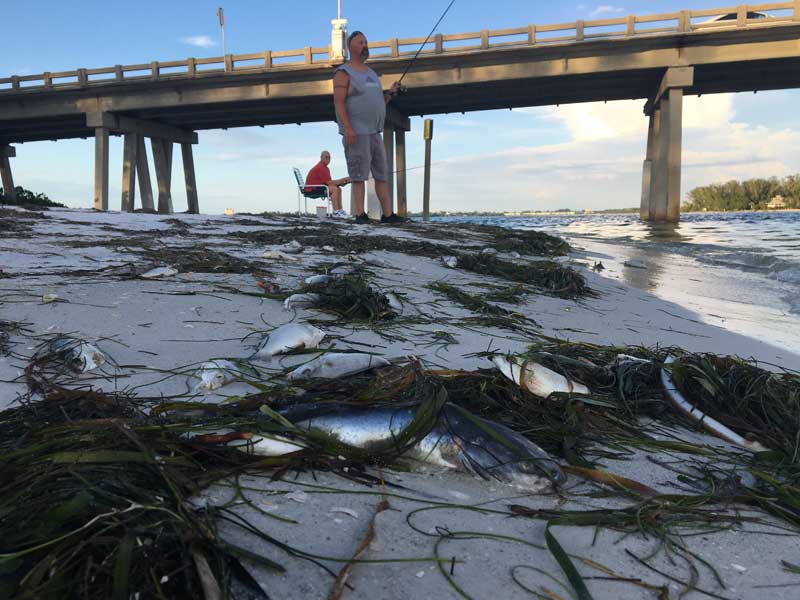 Tom Stang Jr. and his father, Tom Sr., both from Ohio, fish at Longboat Pass at the south end of Coquina Beach in Bradenton Beach. The Stangs said red tide and a shoreline littered with dead fish didn’t scare them. Their family has been vacationing in the Tampa Bay area for more than 10 years. “Mother Nature. Ain’t much we can do about it,” said Tom Stang Sr. Islander Photo: Jennifer Glenfield 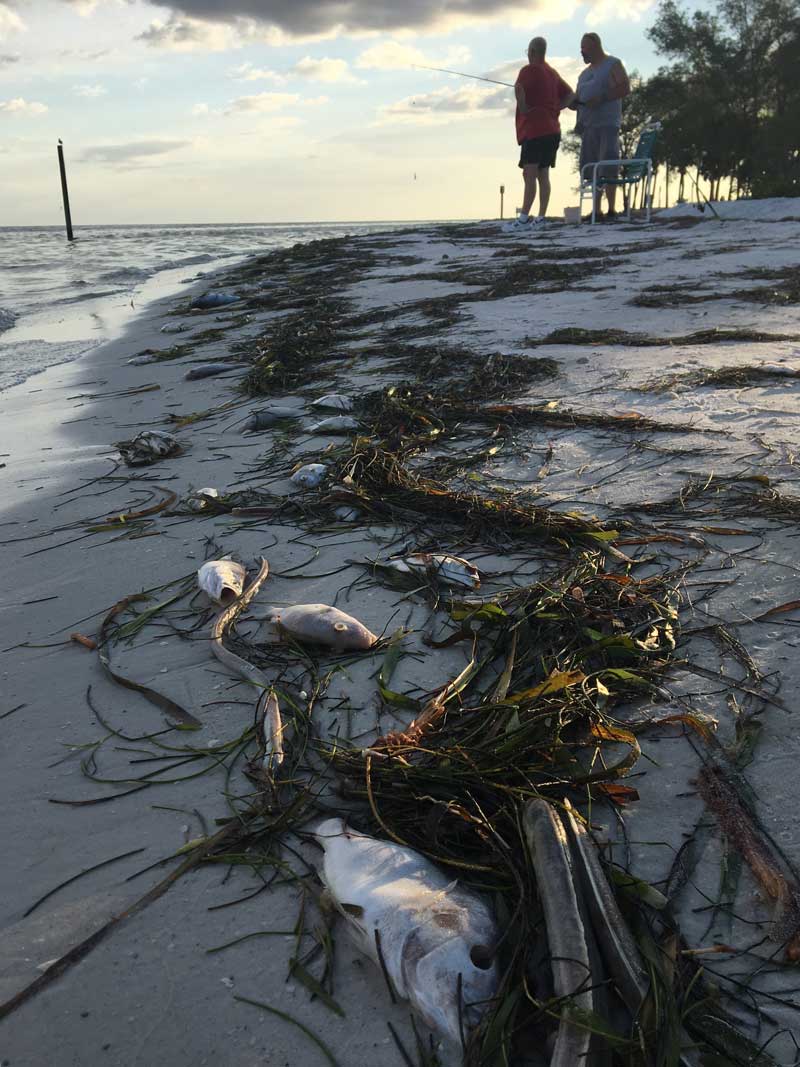 Two fishers unload their gear Aug. 4 at the south end of Coquina Beach amid a wash of dead fish on the shore resulting from the arrival of Karenia brevis — a red tide bloom. Father and son, Tom Stang Sr. and Tom Jr., of Ohio, said they saw a worse bloom 10 years ago at St. Pete Beach. “There were big fish washing ashore then,” Tom Stang Jr. said. 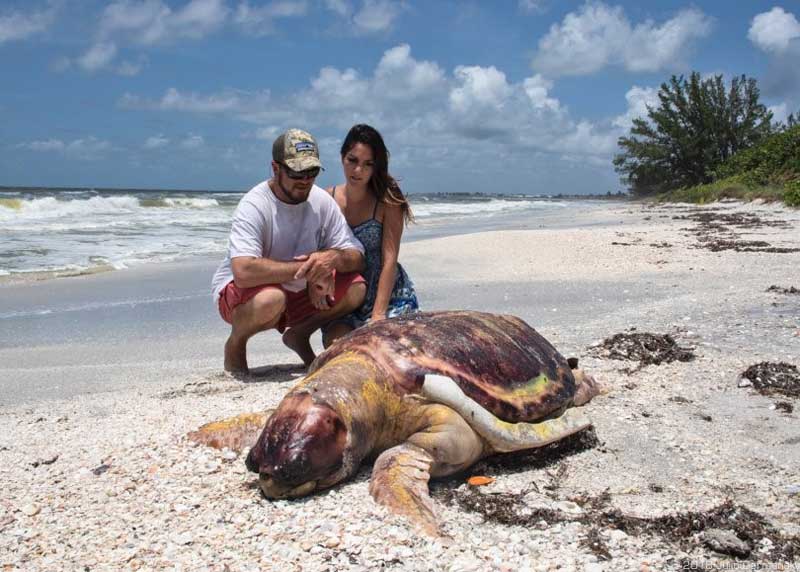 Capt. Shannon Hoeckel and Arelia Spurgeon kneel by a dead sea turtle on the beach at Boca Grande at the end of July. More than 400 stranded and dead sea turtles have been removed from Lee, Collier, Charlotte and Sarasota counties since the red tide bloom began nine months ago. Islander Photo: Julie Dermansky for DeSmog 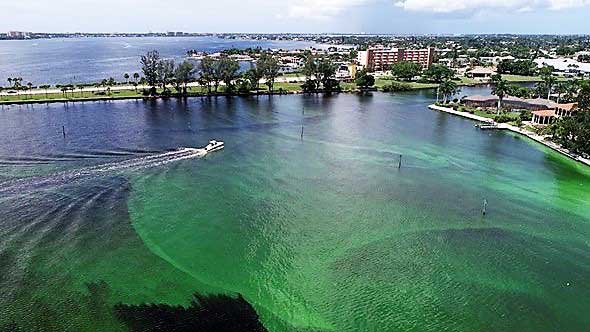 The scenes are heartbreaking.

A dead manatee being nuzzled by others. Fish littering beaches and canals. Sea turtles grounded on shore, succumbed to neurotoxins. A deceased whale shark bobbing in the shallow surf.

“It seems like the plot and imagery of an old 1950s horror movie, where Mother Nature goes completely out of control and wreaks havoc everywhere,” John Capece said in an email Aug. 2.

But this is not a new release of “Swamp Thing” or “The Creature from the Black Lagoon.” It’s the summer of 2018 on Florida’s west coast and a harmful algal bloom is to blame.

Those who live in Florida or visit frequently know the words Karenia brevis can bring a toxic stench and misery.

Red tide, an organism that can affect the nervous systems of fish, turtles and mammals, also can spell death for marine life.

The current red tide bloom off the west coast of Florida began in November 2017 and likely will continue into 2019, according to the Florida Fish and Wildlife Conservation Commission.

Though areas south of Anna Maria Island had reported heavy fish kills — Siesta Key was littered with dead fish Aug. 1 — at Coquina Beach in Bradenton Beach, the water was clear until it wasn’t. Dead fish started washing ashore there on Aug. 4.

By Aug. 3, conditions were rapidly changing.

One swimmer told The Islander his group had a noticeable “cough and tickle in the throat” while on the beach that evening in Holmes Beach.

By afternoon Aug. 4, dead fish were seen floating in Anna Maria Sound and they dotted the shore of Coquina Beach, where more and more dead fish were washing up with the tide.

By noon Aug. 5, dead fish and strong concentrations of red tide were reported up the coastline from Naples to Passage Key at the north end of Anna Maria Island.

The Anna Maria Island Chamber of Commerce, attempting to keep locals and travelers abreast of the situation, has been posting reports on its website several times a day. A long-lasting red tide could affect not only sea life, but also economics on the island.

Bradenton Beach officials discussed the red tide issue during a city commission meeting Aug. 2. Knowing that the island’s beaches are what drives tourism to our area, they expressed concern.

City Commissioner Jake Spooner, who operates a miniature golf attraction and souvenir store, weighed in on the issue. “I’m just really surprised how devastating it is. Not just ecologically, but economically. I don’t see a really strong push to try to resolve this,” Spooner said.

He suggested calling for cooperation between barrier island officials and the Florida League of Cities as a way to pressure the state to solve the problem.

“People aren’t going to Fort Myers Beach and they’re not going to Sanibel. They’re coming here and that’s caused a big increase in our fluctuation this season,” Spooner said of his business’s boost in summer revenue.

But the depth of the toxic disaster was not lost on the commissioner.

“If you see the pictures, it tears your heart apart.”

And, after Spooner commented, red tide and dead fish arrived in Bradenton Beach.

Not to be confused with blue-green algae

Capece, the scientist who likened the situation in Florida to a horror movie, is working with Calusa Waterkeeper, part of a global alliance for swimmable, drinkable, fishable waters. He has seen first-hand the damage from both a blue-green algae bloom and a red tide bloom. His area of south Florida around Cape Coral has been hard hit, with miles of toxic goo and a red tide outbreak in its ninth month.

Oozing blue-green algae has fouled waters, sending residents indoors with a combination of itchy eyes, dripping noses, breathing problems and nausea. Those near the green goo blooms say in Facebook posts it smells like “death,” and the effects exacerbate as it runs course and begins to die. Scientists caution the green slime can cause skin irritations and nausea.

The blue-green algae blooms have stayed south and east of Anna Maria Island and probably will remain south because of the geography, according to Justin Bloom of Sarasota Waterkeeper.

It should not be confused with red tide.

Cynobacteria, which causes the almost neon coloration, is mostly found in Florida lakes. Algae is a basic building block, but mixed with phosphorus and nitrogen from agriculture, it becomes explosive and toxic, according to Waterkeeper.

Summer sunlight, warm temperatures and pollution from stormwater run off is a perfect petri dish.

Lake Okeechobee collects water from the nearby growing fields. Bloom said the lake now functions as a reservoir for millions of gallons of polluted water.

“It’s pollution from agriculture for the most part,” Bloom said. “Agriculture to the north and sugar growing to the south. Water backs up during rainy season, or a heavy rain event, and fills the lake. Eventually, the water level in Okeechobee has to be lowered to keep from compromising the dikes and endangering lives. That’s when the problems start.”

The algae-laden water flows east and west on rivers toward the Atlantic and the Gulf of Mexico.

Calusa Waterkeeper maintains the record-breaking rain in May, followed by a calm sunny June, resulted in a perfect storm.

The blue-green algae has made national news, and local business owners are bemoaning the loss of revenue. Restaurants are empty. Beaches are deserted and fishing is out of the question.

Meanwhile, in Sarasota, Bloom said dead fish had washed up in his neighborhood.

“I can’t go outside my home without gagging. I’m keeping my infant son indoors,” he said.

The current favors the spread or red tide north along the west coast of Florida.