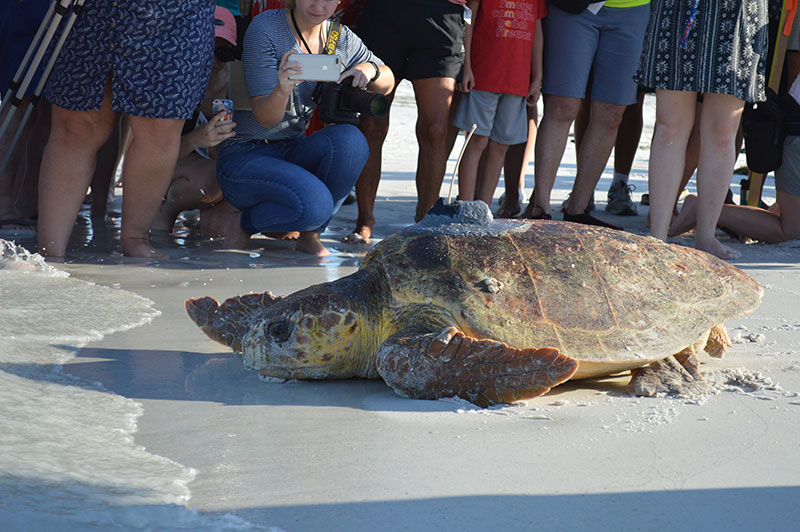 With a tracking device atop its shell, a loggerhead makes its way June 19 into the Gulf of Mexico. Islander File Photos: ChrisAnn Silver Esformes 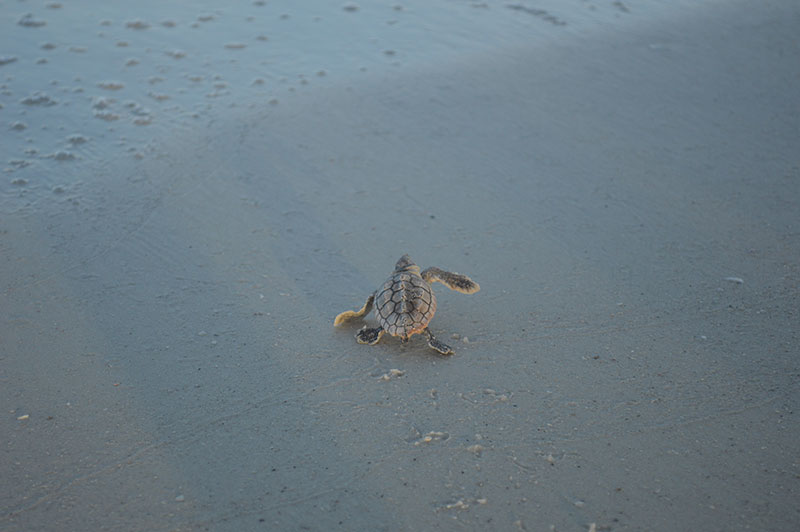 A sandy hatchling crawls Aug. 14 from its nest on the shoreline in Bradenton Beach to the Gulf of Mexico. “You made a difference in 2018,” was how Suzi Fox, Anna Maria Island Turtle Watch and Shorebird Monitoring executive director, started her end-of-the-year presentation to AMITW volunteers.

And what a difference they made.

AMITW closed out another record-breaking season Oct. 14, when data was collected from the last reported loggerhead nest on island beaches during the 2018 nesting season.

Under the watchful eyes of more than 100 AMITW volunteers who walk the beach each morning May-October looking for signs of nesting or hatching, more than 35,778 hatchlings found their way to the Gulf of Mexico — about 10,000 more than last year.

The first nest of the season was spotted May 13 on Coquina Beach in Bradenton Beach.

Within two weeks, 47 more nests were discovered on island beaches, a slower start than 2017, likely due to cooler temperatures, according to Fox.

Upon hatching, a sea turtle is guided by instincts to the reflections of the moon and stars on the Gulf waters. In some cases, hatchlings can become disoriented away from the water by lights visible from the beach.

Throughout season, Fox worked with code enforcement in the three cities to remedy problems by bringing lights into compliance with sea turtle regulations.

Additionally, Fox met with representatives of the Florida Fish and Wildlife Conservation Commission, Florida Power and Light, and staff and officials in the three island cities to discuss installing amber-colored street lights, which are safe for people, but less visible to sea turtles.

“Next year we hope to have a better streetlight option moving into place with an amber-colored light,” Fox said Oct. 16.

Throughout the year, Fox and her team of volunteers educate the public about the importance of turtle-friendly lighting — low and shielded — and closing blinds and curtains at night in beachfront units.

AMITW creates handouts, including door-hangers and leaflets, and distributes them to the public at informational Turtle Talks.

People also are invited to nest excavations throughout the hatching portion of season. AMITW volunteers collect data 72 hours after a nest hatches and share it with government agencies. Volunteers count the number of hatched and unhatched eggs and any live hatchlings in the nest are released to the Gulf.

There were no major storms this season, which was “very unusual,” according to Fox. This meant less washed-over nests leading to higher hatch rates. In 2018, 447 nests hatched compared to the previous record of 340 nests in 2017.

According to the FWC, hatchlings are not harmed by red tide since they survive on energy provided by internalized yolk until they swim out to the seagrass beds several miles offshore.

However, Fox said she was notified almost daily in August that sub-adult sea turtles — loggerheads, greens and Kemp’s ridleys — were washing ashore dead on island beaches.

“It was heartbreaking,” Fox said.

In spite of red tide, nesting season continued to flourish.

“As of this week, we have broken all previous records for number of nests, number of hatched nests and number of hatchlings,” Pete Gross, AMITW “stat guy” wrote Sept. 9 in an email to Fox and volunteers.

Hurricane Michael, when it passed through the Gulf Oct. 9, coincided with an unusually high “king tide” and produced some flooding.

As of Oct. 10, AMITW reported 447 hatched nests and four nests remaining to hatch on the island. Fox also said only four nests were lost to Michael and high tides.

As of Oct. 14, no nests remained on the island.

“We accredit higher nesting numbers to AMITW’s new lighting program and the community’s acceptance of it,” Fox said. “It is all about better practices and balancing people and nature.”

The loggerhead — named Bortie for Bortell’s Lounge in Anna Maria, AMITW’s race sponsor — was held overnight and tagged with a satellite tracker June 18. She was released June 19 after nesting on Coquina Beach in Bradenton Beach.

As of Oct. 17, Bortie had traveled 282 miles and was in second to last place in the marathon, which tracks distance covered through Nov. 1 by the tagged sea turtles.

In 2015, AMITW’s tagged turtle Amie lost her transmitter shortly after the start of the marathon.