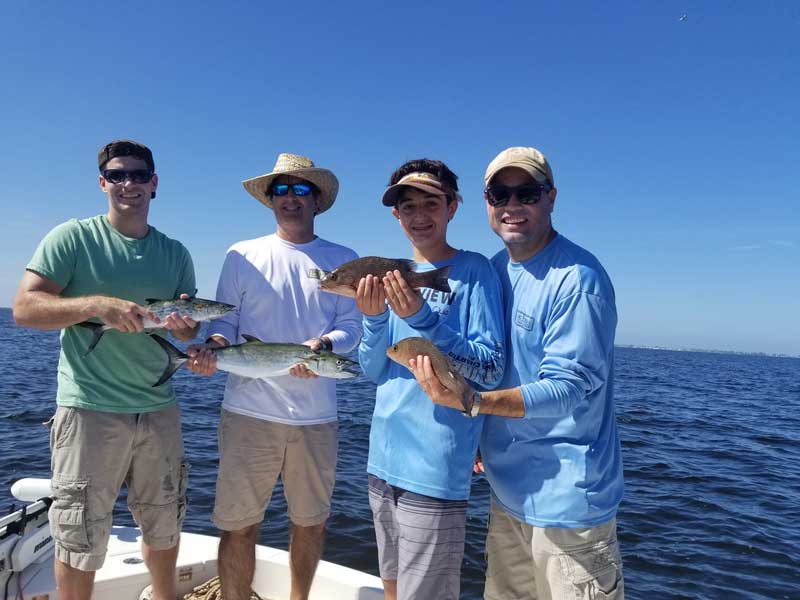 Fishing around Anna Maria Island is good despite red tide.

Take notice that at its September meeting in Tallahassee, the Florida Fish and Wildlife Conservation Commission directed staff to expand the recent catch-and-release only law for snook and redfish to include all of Tampa Bay. FWC also extended this law through May 10, 2019.

Now that you’re aware of the closure, we can talk about what’s biting.

Of course, snook and redfish are being caught regularly in southern Tampa Bay. Schooling redfish are being fond frequently, with some schools exceeding a couple of hundred. As for the snook, shallow flats around mangrove points and oyster bars are proving to be quite good spots.

Spotted seatrout are being caught on many of the deeper grass areas on the eastern portion of southern Tampa Bay.

The same applies for mangrove snapper and Spanish mackerel. Numerous jack crevalle have moved into the area, which can add excitement to the bite, as they are quite powerful for their size.

On my Southernaire charters, as sporadic as they may be for now, I’m finding plenty of catch-and-release action on snook and redfish. Casting live shiners around docks or mangrove edges is producing action on both species. Most redfish being caught are slot-size. They are being measured and released. As for the snook, most are 20-30 inches — again measured and released.

When I’m looking for fish for dinner, I’m hunting mangrove snapper and Spanish mackerel. Fishing structure such as reefs and wrecks in Tampa Bay is producing decent numbers of both species for my clients.

Capt. David White of Anna Maria Charters says he’s catching numerous fish while in Tampa Bay. Mangrove snapper and Spanish mackerel are being caught around structure and over deep grass flats. On the shallower flats, White is catching plenty of catch-and-release snook and redfish. Moving offshore, White is running some long distances to find clean water, but he’s doing well on mangrove and yellowtail snapper. While fishing wrecks, he’s also hooking into amberjack and African pompano.

Capt. Jason Stock is fishing offshore, which is resulting in a variety of species. He also is having to run 15-20 miles out to find clean water. Upon arrival in the good water, Stock is fishing ledges for yellowtail and mangrove snapper. Both are eating live or frozen bait. While fishing wrecks, Stock is catching goliath grouper and African pompano.

Many inshore catch-and-release snook and redfish are being caught with regularity by Stock’s anglers. Small tarpon also are taking the hook in Tampa Bay.

Jim Malfese at the Rod & Reel Pier says mangrove snapper are keeping pier fishers occupied. Numerous snapper are being caught using live shrimp as bait. Most are 12 inches, with a few exceeding 14 inches. While targeting snapper, fishers are hooking into an occasional sheepshead or flounder. Using larger baits, such as pinfish or mojarras, is resulting in some catch-and-release snook at Anna Maria’s northernmost pier. These fish are 20-35 inches.

Capt. Warren Girle is fishing inshore in the clean waters of southern Tampa Bay. Fishing around structure is yielding numerous mangrove snapper. In fact, limits of the vigorous snapper are being caught. Also around structure are Spanish mackerel. In areas where deep grass is present, a variety of fish — spotted seatrout, jack crevalle and bluefish — are being found. These fish, especially the jacks and bluefish, are aggressively striking live free-lined shiners.