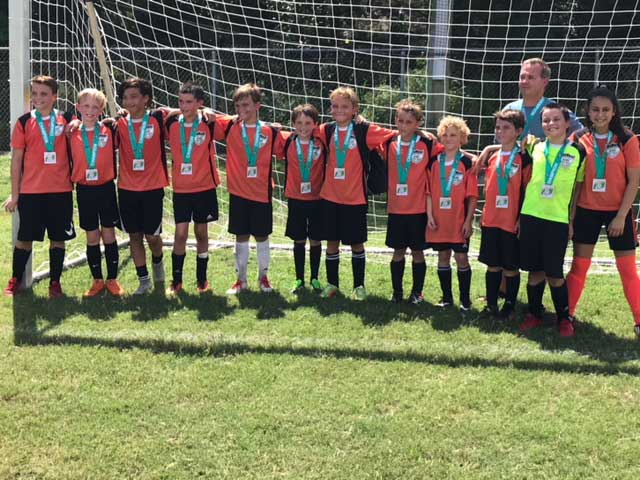 The adult soccer playoffs at the Center of Anna Maria Island concluded Sept. 27.

Bins Be Clean was led in the matchup with Mar/Kis by a hat trick from Diego Felipe while Nate Welch, Francisco Oliviera and Darrin Wash each added one goal in the victory.

Shay Coleman’s two goals paced Mar/Kis, which also received a goal each from Omar Polar and Miguel Ajoy in the loss.

The second semifinal match saw top-seed Sato Real Estate roll to a 7-1 victory over Ross Built to advance to the championship game. Josh Sato and Zack Leib both scored two goals and assisted on another. Jessica Williams added two goals, while Scott Probst completed the scoring with a goal. Scott Bear had nine saves in goal in the victory.

Vince Circharo notched the lone goal for Ross Built, which also received 15 saves from goalie Ben Sato in the loss.

The championship game saw Sato Real Estate slip past Bins Be Clean by a 4-3 score behind a pair of goals from Amy Ivin and a goal each from Josh Sato and Zack Lieb.

Diego Felipe scored two goals in the loss to lead Bins Be Clean, which also received a goal from Brayan Felipe and an incredible 20 saves from goalie Rico Beissert.

Center U12 soccer team wins tourney
The Center Select U12 soccer team brought the cup home from the Goal to Goal Cup Sept. 22-23 at Sawgrass Elementary School St. Petersburg. The team avenged an earlier loss to host Strictly Soccer by a 3-2 score in the finals thanks to the game winner by Aiden Templeton. Jack Mattick and Jackson Pakbaz scored the first two goals.

The team opened the weekend action with an 8-1 victory over Liverpool Football Club in their morning match Sept. 22. They weren’t as fortunate in their second match of the day, dropping a 5-2 decision to Strictly Soccer Football Club.

The team bounced back the following morning with a 3-0 victory over the Sarasota Spartans to advance to the finals.

Congratulations to all the players, coaches and parents.

Key Royale news
The men kicked off another week of golf action Sept. 24 at Key Royale Club with a nine-hole modified-Stableford match. Mike Gillie earned clubhouse bragging rights with a score of plus-7 to edge second-place finisher Brian Comer by one point.

The women took to the course Sept. 25 with a nine-hole individual-low-net match in two flights.

Helen Pollock won Flight A with a score of 1-over-par 33, while Flight B saw Jana Samuels and Sue Wheeler finish in a tie for first place with matching 1-under-par 31s. Terry Westby was alone in second with an even-par 32.

Horseshoe news
Horseshoe action Sept. 26 at the Anna Maria City Hall horseshoe pits saw three teams forge 2-1 records to advance to the knockout round. The team of Dom Livedoti and Jerry Disbrow drew the luck bye into the finals and watched as Hank Huyghe and Neil Hennessey slipped past Jay Disbrow by a 22-17 score. The closely contested championship match saw Livedoti and Jerry Disbrow hold on for a 24-18 victory.

Three teams also advanced to the knockout stage during Sept. 29 action with 2-1 records. Livedoti, this time teaming up with Bob Heiger, again drew the bye into the finals and watched as Jerry Disbrow and Huyghe moved in with a convincing 23-12 victory over Hennessey. Jerry Disbrow earned his second trip to the winner’s circle after he and Huyghe rolled to a 21-12 victory over Livedoti-Heiger.