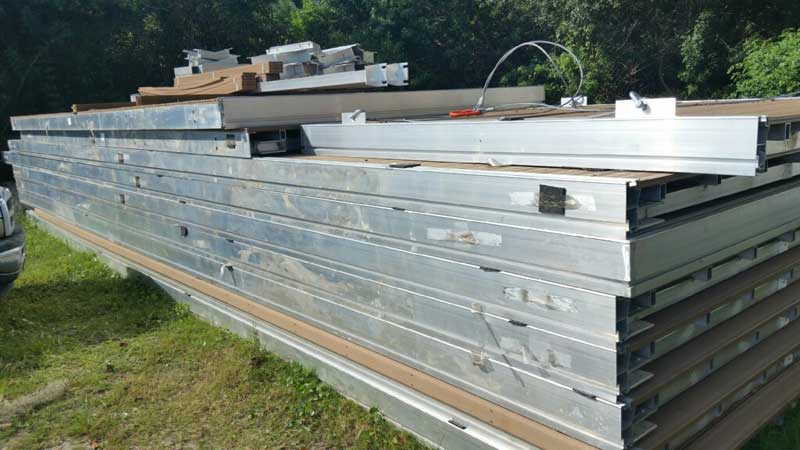 When Speciale confirmed Nov. 8 the location of the dock parts, he and Commissioner Ralph Cole, who also serves as the city’s community redevelopment agency chair, drove to Hecker Construction Company Inc. in Gibsonton to put eyes on the dock components.

They confirmed Hecker had the dock parts and, after speaking with Hecker representatives, Speciale began orchestrating the process to get the dock floats and cleats to Bradenton Beach and installed.

It’s been a long haul since Technomarine was first contracted by the CRA in April 2017 to build and install the dock, due to the lack of communication and numerous delays from Technomarine.

According to the aborted final schedule of four plans from Technomarine, the dock was to have a final inspection Oct. 4.

At a Nov. 7 CRA meeting, the CRA voted to give Technomarine two more days to make contact with the city regarding plans for dock installation, or the city would contact the Florida attorney general with its complaints.

The dock components were manufactured and shipped from Spain in August, and transported to a laydown yard in Tampa.

Speciale said he spoke with Eric Shaffer, project manager with Hecker, who said the dock was delivered to Hecker, which was contracted for the installation, but since there was no payment from Technomarine, the dock parts remained at the onsite laydown yard. He added the company is willing to work with the CRA to get the dock installed.

Because Hecker was subcontracted by Technomarine, the CRA is not required to go out for a request for proposals for the install.

According to Speciale, the floats were not included with the dock shipment, but Shaffer said he knows the company contracted to custom build them. He suggested the floats might be stored with that contractor if Technomarine never paid for them.

Additionally, Technomarine did not provide the city with updated permitting information, so the dock permit is incomplete.

Shaffer said his company has an engineer, so Speciale sent Shaffer the Technomarine manual for the dock with engineering information for pilings, which was passed to his engineer.

Speciale indicated they may have to pay more than was budgeted for pilings, but it’s better than starting from scratch on the project.

According to a Nov. 9 email to Speciale from Technomarine CEO Erik Sanderson, the cleats are at Technomarine’s North Palm Beach warehouse. In that email, Sanderson also confirmed the docks were delivered to Hecker.

In another email to Speciale later that day, Sanderson said he would be in touch “to coordinate all.”

Speciale said, according to city attorney Ricinda Perry, by identifying where the dock components and related equipment are located and volunteering to coordinate delivery, Technomarine released the materials to the city.

In October, the board authorized Perry to write a notice for breach of contract, stating the CRA was willing to discuss an “amicable solution” and have the dock components moved from storage to Bradenton Beach. Otherwise, the city would litigate.

However, according to Perry, Technomarine has multiple judgements pending, and all assets likely are or will be frozen. She recommended obtaining the materials, for which the CRA already has paid $83,682 of the $119,980 cost for the project.

Her letter to Sanderson also acknowledged she read a transcript of an August deposition on another case wherein he falsely testified that the Bradenton Beach project “is paid in full and 100 percent complete.”

The next Bradenton Beach Community Redevelopment meeting will be at 9:30 a.m. Wednesday, Dec. 5, at city hall, 107 Gulf Drive N.