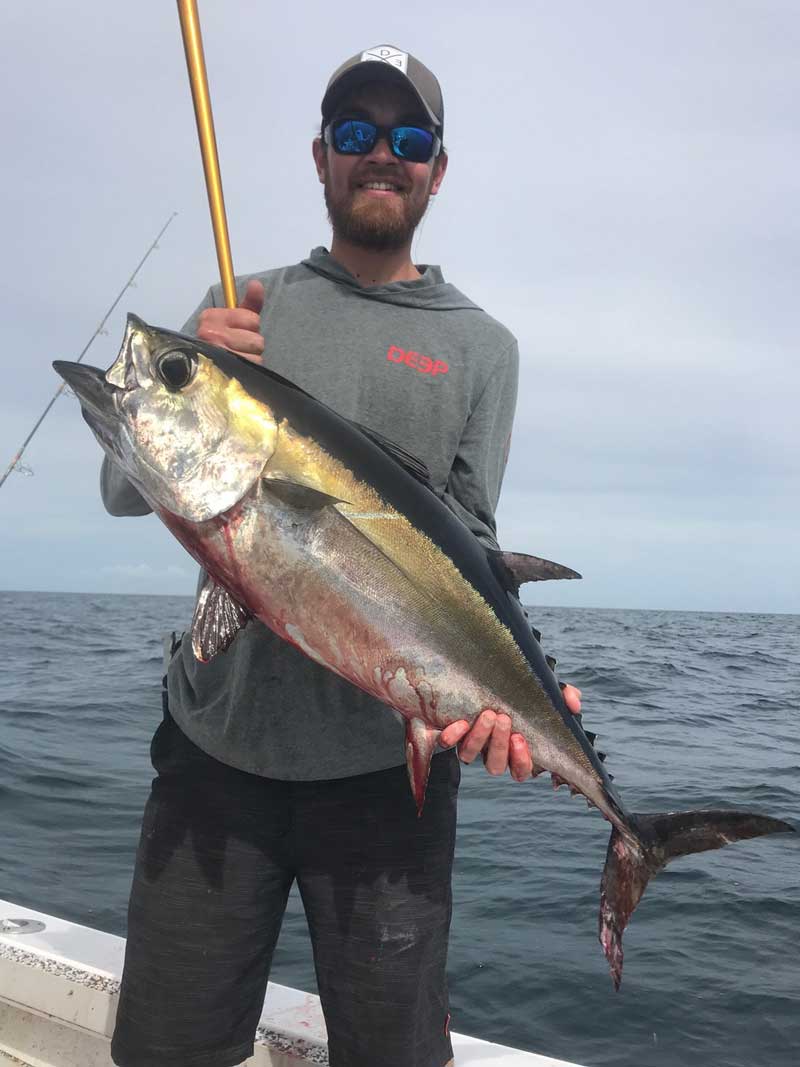 Taylor Sears of Boston shows off a blackfin tuna caught offshore of Anna Maria in the Gulf of Mexico with charter guide Capt. Jason Stock. 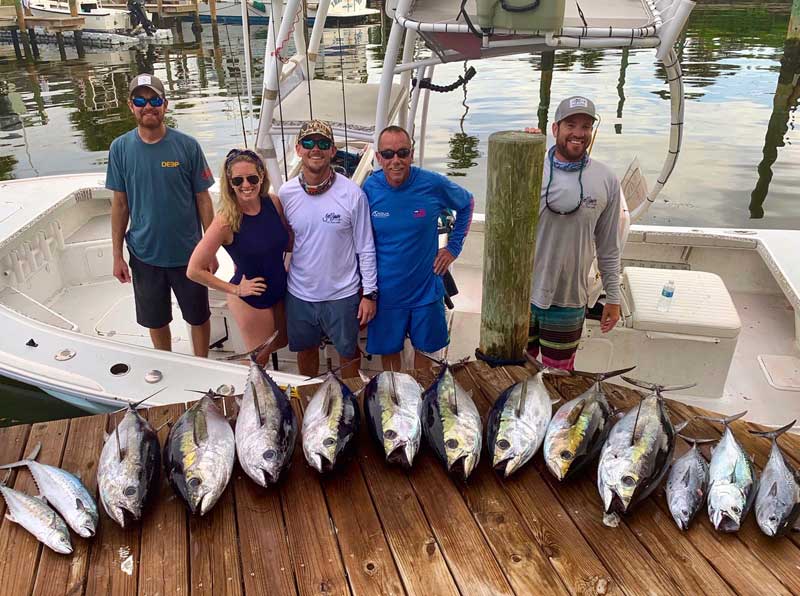 Taylor, left, Claire, Bryan and Greg Sears of Boston and Capt. Jason Stock show off their catch from a day’s fishing Nov. 7 in the Gulf. The Sears, who run a charter operation focusing on bluefin tuna in Boston, also hauled in amberjack, big sharks, kingfish and goliath grouper. Stock reports fishing is good once you get out far enough to clean water. 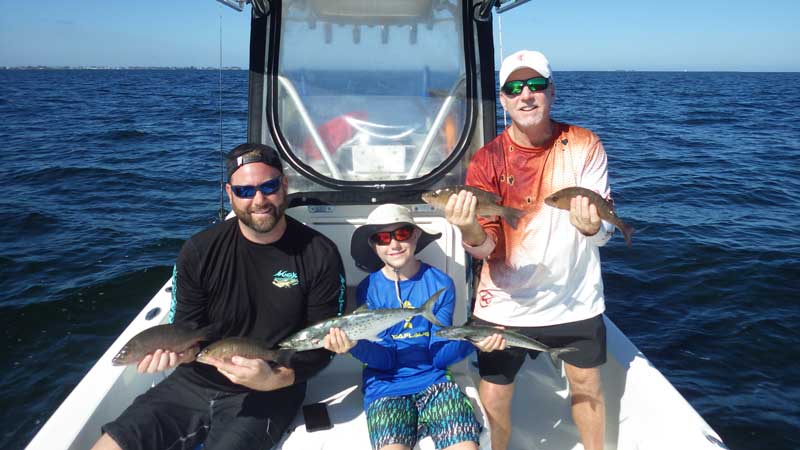 Brad and Aidan Schutte, 9, of Kansas and Randy Righter of St. Augustine show off their catch of snapper and mackerel Oct. 25. They were guided by Capt. Warren Girle.

Although patches of red tide still exist in the Gulf of Mexico east of Anna Maria Island, fall fishing is on the upswing.

While taking the gamble on fishing in the Gulf can be risky, those who are willing to try are being rewarded with some exceptional catches.

Reports of blackfin tuna, amberjack, kingfish and bonito are encouraging. Mangrove snapper, grunts and groupers are being caught as well.

Moving inshore, catch-and-release snook fishing is in full swing. As the water temps drop, the snook are on the flats to feed in preparation for winter. Free-lined shiners aren’t lasting more than a few seconds before they are quickly inhaled by hungry linesiders. Catch-and-release redfish, as well as some decent-sized spotted seatrout, are making a good showing.

On my excursions with Southernaire, I’m finding the catch-and-release action nothing short of exceptional. On some days, when the bite is really on fire, my sport-fishing clients are counting down from when their bait hits the water until they get a strike. One one-thousand, two one-thousand — fish on! Yeah, it’s that good. The snook are so voracious I almost feel bad putting a poor little shiner on a hook — almost.

While reeling in the snook, I’m also seeing redfish, mangrove snapper and spotted seatrout in the mix. My clients are astonished at the variety of species they can catch in one area — not to mention adding in some jacks and ladyfish. Finally, mangrove snapper are still being found on wrecks and reefs. Depending on water clarity, I’m either free-lining baits to them or bottom fishing.

Capt. Jason Stock is running charters offshore looking to hook into some of the migratory species — kingfish, amberjacks, bonito and blackfin tuna. All of these species are being found around offshore structure — reefs and especially wrecks. Both live and artificial offerings are working. In tow with these fish are numerous sharks, which are readily taking freshly filleted pieces of bonito.

Capt. Rick Gross of Fishy Business Charters is hooking up with an abundance of catch-and-release snook, many 20-26 inches with a few slot fish for good measure, while working oyster bars and shallow grass flats.

Fishing structure in Tampa Bay is resulting in mangrove snapper and quite a few flounder. For both, Gross is bottom fishing with live shiners as bait. Most of the snapper are 12-14 inches, while the flounder are impressively larger — some up to 20 inches.

Capt. Warren Girle is loading up on limits of mangrove snapper around reefs and wrecks in Tampa Bay. Two methods are working to catch these tasty fish. One is free-lining baits over the structure. This is working when the snapper are being leader-shy. The other method is bottom fishing with a knocker rig combined with a live shiner.

Also, when bottom fishing, Girle is hooking into flounder and grouper.

Moving to the shallows, Girle is bringing his share of catch-and-release snook to the boat. Redfish and trout are being caught while flats fishing, too.

Capt. Aaron Lowman is working nearshore ledges with good results. Lowman warns there are still patches of red tide in the Gulf and fishing there can be a gamble. On days when there is minimal red tide, Lowman is catching Key West grunts, limits of mangrove snapper and a few hogfish and gag grouper.

Moving into Tampa Bay, Lowman is finding catch-and-release snook, as well as some catch-and-release redfish, for his sport fishers. Action on spotted seatrout is heating up for Lowman with numerous bites occurring over deep grass during incoming tides.

Capt. David White of Anna Maria Charters is targeting catch-and-release snook when he has anglers on the boat who are just out to bend a rod. Snook fishing is at its finest right now, with catches of 20-30 fish occurring in one spot. For those fishing for dinner, White is putting them on the mangrove snapper bite. Limits of these fish are being caught with ease. While targeting the snapper, White is also putting clients on flounder and Spanish mackerel.