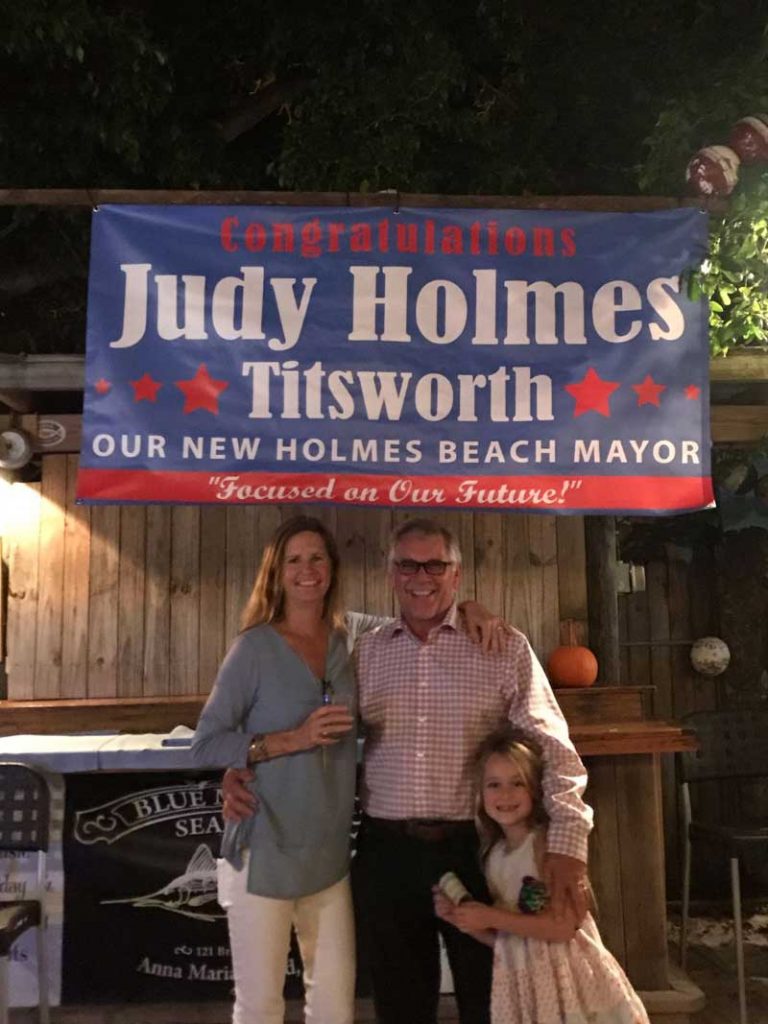 She’s the first Holmes family member to serve as mayor since the city incorporated in 1950.

Mayor-elect Judy Holmes Titsworth swept away her opponent in the Nov. 6 election, taking more than 79 percent of the vote — a likely record for a contested Holmes Beach mayoral election in the city.

The Manatee County Supervisor of Elections Office was prepared to certify the results of the race Nov. 18 with the rest of the county election after a 10-day period allotted for counting overseas ballots.

However, certification is likely delayed by a statewide recount.

“It won’t change the outcome” in Holmes Beach, according to SOE deputy chief Sharon Stief, who said the margin is so wide, the ballots postmarked prior to Nov. 6 that have yet to be counted, if any, are unlikely to make a dent.

City clerk Stacey Johnston said she would swear in Titsworth and the other Holmes Beach election winners. The ceremony was scheduled for Nov. 19, at city hall but, at press time for The Islander, it was postponed to Nov. 26.

Johnston issued a notice Nov. 9 providing that a statewide recount of ballots could delay election certification by the SOE.

Titsworth’s win was by the biggest margin Johnston recalls, including those of past mayoral wins by Carmel Monti, Richard Bohnenberger, Carol Whitmore and Pat Geyer.

She outpolled her opponent, Joshua Linney, by 1,587 to 415 votes, according to the unofficial tally reported Nov. 9 by the Manatee County Supervisor of Elections Office.
Titsworth is a three-term commissioner who served as chair since 2013.

“I would like to think it is because I have worked so hard for the past six years,” Titsworth said about her landslide victory.

Titsworth, who operates a construction business with her husband, said her first order of business is to improve the building department.

She said Nov. 7 the department — comprising of building official Jim McGuinness, three plan reviewers and support staff — has recently become more responsive but, in the past year, builders have complained of overreaching, unfairness and long permit holdups.

“Yes, we want good inspections. Yes, we want to make sure they’re meeting codes,” but without a “bulldog mentality,” Titsworth said, adding the department should not unnecessarily hold up projects.

“I’ve already heard from contractors, they’re pleased” about recent improvements, she said, adding builders must become more accurate in reporting their costs, which correspond to the fees for a permit.

As commissioner, Titsworth said, she’d been unable to get timely responses from McGuinness, but “knowing I’m the next mayor has really opened it up.”

“It was a great experience,” he said of his run for mayor, adding he expects to run again.

Linney’s campaign was marred by revelations of past drug use, arrests for driving under the influence and theft, as well as untrue claims he made about his military service.

Of the 2,810 registered voters in the city’s two precincts, 2,113 voters — including 886 by mail and 233 early voters—cast ballots in the election, according to Nov. 8 county records.

Titsworth succeeds Mayor Bob Johnson, who defeated former Commissioner David Zaccagnino in his first bid for the position in 2014.

Johnson served a second term as mayor without an election due to having no opponent in 2016 and he leaves office favoring a city manager-led government. The idea gained momentum in 2017-18 and the subsequent recommendation for a city manager from the committee he appointed to explore the city’s “form-of-government.”

The committee recommended the change to weak mayor and city manager, in lieu of the current administrative mayor, overseeing the day-to-day operation, hiring and firing of city employees — a recommendation that stalled in August with the city commission.

Commissioners disbanded the committee without taking a vote on its recommendation, opting to defer the decision to a duly-elected charter review committee, which led to a slate of candidates from the committee and others.

Titsworth has been outspoken against the switch to a city manager as costly and unnecessary.

“It’s a mix. It’s not everyone on that postcard” who ran favoring the city manager, Titsworth said, adding she expects an unbiased, comprehensive charter review.