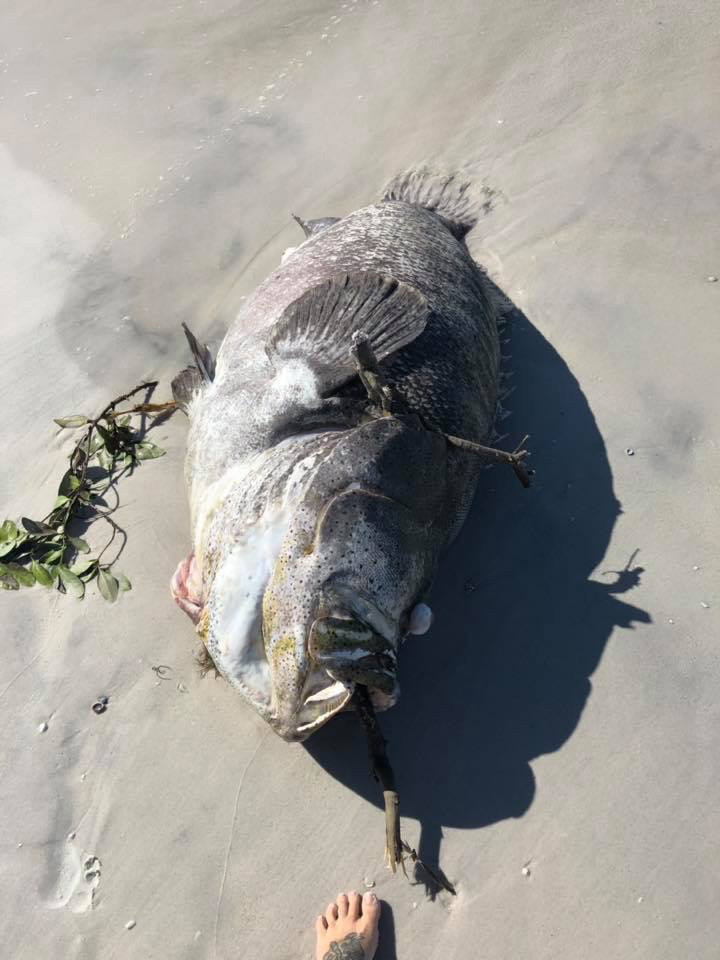 Joey Dale was on a morning walk Nov. 6 when he stopped in his tracks.

On the sands of Whitney Beach on the northern tip of Longboat Key, Dale came upon a dead goliath grouper measuring about 4 1/2 feet long.

“It was a big one,” Dale told The Islander. “It was strange. There were no other fish around, just this one giant grouper. The first thing I thought was red tide.”

Dale, co-owner of The Feast restaurant in Holmes Beach, said as he strolled the beach he did not experience coughing or burning eyes, the effects of red tide reported by some people on local beaches.

“I don’t think the red tide is nearly as bad as it was before,” he said. “There are no dead eels and mullet on the beaches and no smell.”

However, red tide was blamed for fish kills in Manatee, Sarasota and Pinellas counties the week of Nov. 5-11.

Moderate respiratory irritation was reported the afternoon of Nov. 8, along with heavy red drift.

However, the mornings of Nov. 8-9, just before the long Veterans Day weekend, a vacationer reported dead fish north and south of the public beach.

Seaham Grace, visiting Anna Maria Island from Bromley in the United Kingdom, told The Islander he and his wife saw twice as many dead fish on the beach Nov. 9 as the day prior. The stretch they observed reached about 10 blocks south from the Manatee Public Beach.

“They might be coming in from offshore,” Campion said. There are definitely more dead fish on the northern end of Anna Maria Island right now. The water looks bad. It’s dark again in some places.”

Campion said the dead fish were scattered, unlike the piles of fish in the massive kill in August. He said many mackerel were found Nov. 8 along with snook, catfish and baitfish for the majority of the most recent fish kill.

“I was setting up for Symphony on the Sand this morning and there were no dead fish on the beach at Coquina. Nothing.” DeMilio told The Islander by phone.

While humans were faring better with the latest round of red tide, Pinellas County had become the new hotspot for manatee deaths attributed to K. brevis.

According to the FWC, 10 manatee deaths attributed to red tide occurred Sept. 29-Oct. 19 in Pinellas, more than anywhere else in Florida.

The red tide toxin builds up in the manatees, paralyzes their respiratory systems and they drown.

Dead manatees are taken to the FWC’s Marine Mammal Pathobiology Laboratory in St. Petersburg for necropsies, which help scientists determine the cause of death.

FWC officials say manatees in distress often appear unable to control their bodies or buoyancy. Officials advise people to contact FWC immediately if they think they see a manatee in distress and hold its head out of water when possible until wildlife officials arrive.