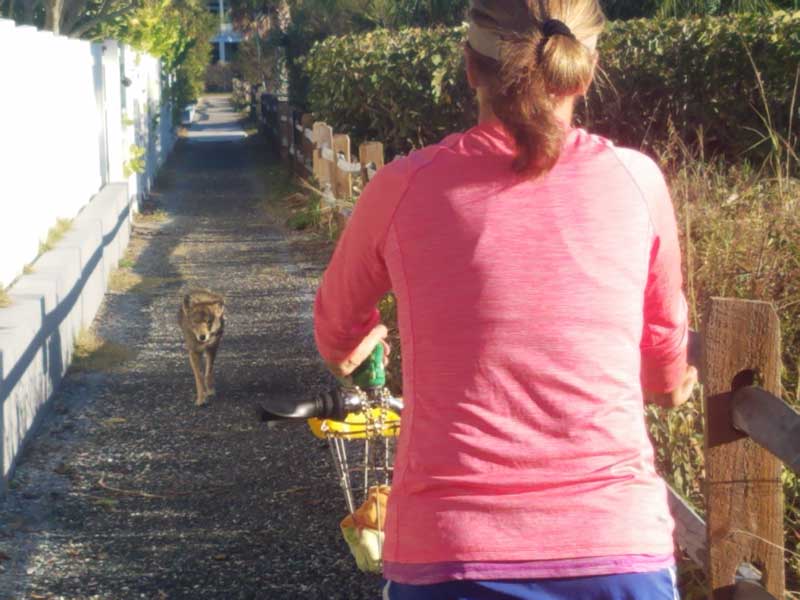 Maria Yatros meets up with a coyote as she bicycles on the “secret sidewalk” that runs along the Gulf in Anna Maria. Islander Photo: Gy Yatros

Jones began researching the city’s options for handling coyotes in November 2018 and presented his findings Jan. 10 at a city meeting.

He said coyotes are part of the ecosystem and are here to stay.

Without a vote from city commissioners, this is the city’s stance on the issue.

Holmes Beach and Longboat Key officials also have decided not to act to remove coyotes.

Attempts to humanely remove or eradicate coyote populations have proven near impossible due to their adaptability, intelligence and the difficulty trapping the animals, according to Jones.

When a coyote population is diminished, coyotes breed to make up for any loss, producing larger litters. If a family is driven from its territory, other coyotes will fill the vacancy, according to Jones.

Jones likened coyotes to alligators, in that coexistence is possible when people are educated on how to live with the animals.

Jones said coyotes might keep the island’s rodent population in check, and observed that aggression toward humans is rare. Steps can be taken to ensure the safety of pets, he added.

“They’re beautiful animals,” Jones said. “You have to respect them for what they are and I think, going forward, we can all live in some type of symbiotic relationship.”

Suzi Fox, director of the Anna Maria Island Turtle Watch and Shorebird Monitoring, joined the presentation at the meeting, saying Florida Fish and Wildlife Conservation Commission officials trained her and AMITW volunteers how to track coyotes to protect sea turtle and shorebird nests.

Fox said she has seen numerous coyote tracks on the beach that would not be a threat to sea turtle nests. She was unsure of whether coyotes pose a threat to shorebird nests, but assured people attending the meeting the nests would be protected.

“Don’t be scared for the wildlife out here,” Fox said. “People need to be cautious, but nesting beaches will be fine.”

Holmes Beach Police Chief Bill Tokajer also attended the meeting, providing pamphlets on how to live and deal with coyotes.

“They’re here,” Tokajer said. “Don’t feed them. Do not feed any of the wildlife. That’s not our place, it’s their job to find their own food.”

People interested in learning more about coyotes can call the FWC Southwest Regional Office at 863-648-3200, or go online to myfwc.com/contact/fwc-staff/regional-offices.

4 thoughts on “Anna Maria ready to  coexist with coyotes”