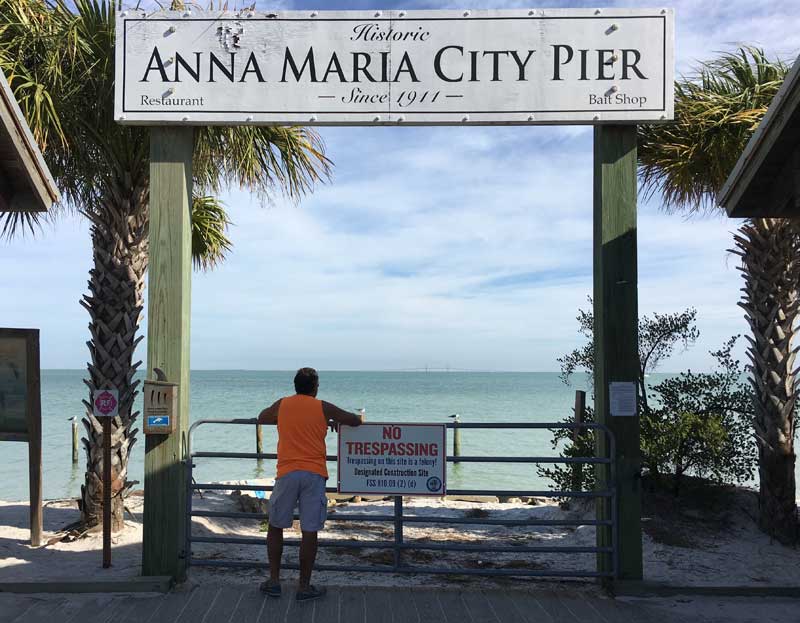 Port Charlotte resident Chuck Kulesa looks over the water where the Historic Anna Maria City Pier — damaged by Hurricane Irma in September 2017 — was demolished over the summer of 2018. Islander Photo: Ryan Paice

Piling by piling, construction of the new Anna Maria City Pier is about to get underway.

Clearwater-based contractor i+iconSOUTHEAST began mobilizing Jan. 18 with the installation of a construction trailer in a fenced-off area of the pier parking lot.

The Historic Anna Maria City Pier was damaged by Hurricane Irma in September 2017, and the city soon after deemed the structure destroyed.

Largo-based contractor Speeler and Associates was hired to demolish the damaged pier in June 2018 and, by October 2018, that work was complete.

Icon plans to start driving pilings — 12-inch spun concrete posts for the walkway and 14-inch concrete pilings for the T-end of the pier — into the bay floor Jan. 23.

“I am very excited to see the hard work of the city staff, mayor and city commission since the hurricane in 2017 finally come to fruition with the official beginning of construction next week on out new city pier,” Seymour said in an interview Jan. 18.

After pilings are driven into the bay floor, wood bents will be installed to bear the load of the ipe wood decking.

Construction on the pier walkway and T-end must be finished by Aug. 26, or Icon will pay a $975 daily penalty for each subsequent day of work.

Mayor Dan Murphy was on vacation as the work got underway.

The city plans to issue a request for bids for the construction of the restaurant and bait shop at the T-end of the pier after August.