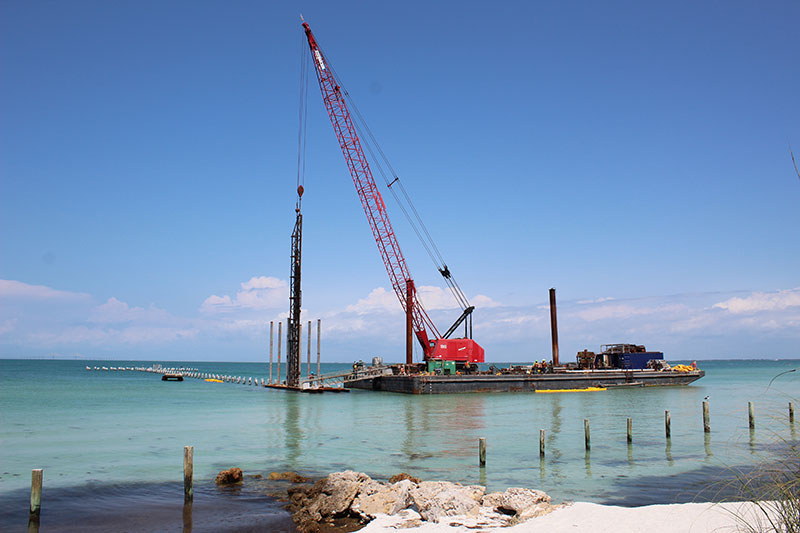 Construction of the new Anna Maria City Pier walkway and T-end is chugging away.

Anna Maria Mayor Dan Murphy said in an interview April 5 that i+iconSOUTHEAST had driven 154 pilings — more than three-quarters of the 201 pilings planned for the 776-foot-long pier.

He announced the pavilion at the base of the pier would be fenced off April 15 for 10 days to secure the area for one last section of pile-driving close to shore.

Completion of the pile-driving, as well as leveling of the piles, is expected April 26.

Despite the failure of two T-end pilings, Murphy said Icon had not had piling problems during work on the walkway.

Following completion of the walkway pile-driving, Icon will place a concrete deck on the T-end and install wood bents to support decking on the walkway.

Robert Pelc, president of Advantage Trim & Lumber, in an interview April 5, said there might be an issue with decking the city purchased in March to save money in sales taxes that otherwise would have been paid by Icon for materials. The city is a nonprofit, tax-exempt entity.

Pelc said the ipe decking, contracted by Icon and purchased by the city from Decks and Docks Lumber Co., is too long and thin to prevent cupping and twisting due to limited airspace between the wood and the supporting material.

The city plans to use 3/4-inch by 5 1/2-inch planks, but Pelc, the president of the largest producer of ipe decking in the world, said he would have recommended the use of thicker, 5/4-inch by 6-inch ipe planks.

Pelc said the cupping and twisting problem would be exacerbated if the city neglected to oil the wood regularly, and could begin within a year. He said he called the mayor’s office and left messages, but hadn’t received a response.

Murphy said he spoke with city engineer Ayres Engineering about Pelc’s concerns, and Ayres determined that no such design flaw exists.

The mayor said Pelc could meet with him in person, but no such a meeting was scheduled.

“I would like to know what knowledge their engineers are basing that on, because engineers often call us for that information,” Pelc said.

Murphy told The Islander in an interview March 28 he thought it sounded like Pelc was critical because the city did not purchase materials from his company.

Pelc said he would have liked for Advantage to supply the city with the decking, but was unable to submit a bid because the city asked for a contractor that could both provide material and build the pier. Advantage could have provided material, but not construction.

He said he is less concerned with missing out on supplying the ipe and is more concerned that people visiting the new pier will walk away with a bad impression of the decking material if it becomes distorted.