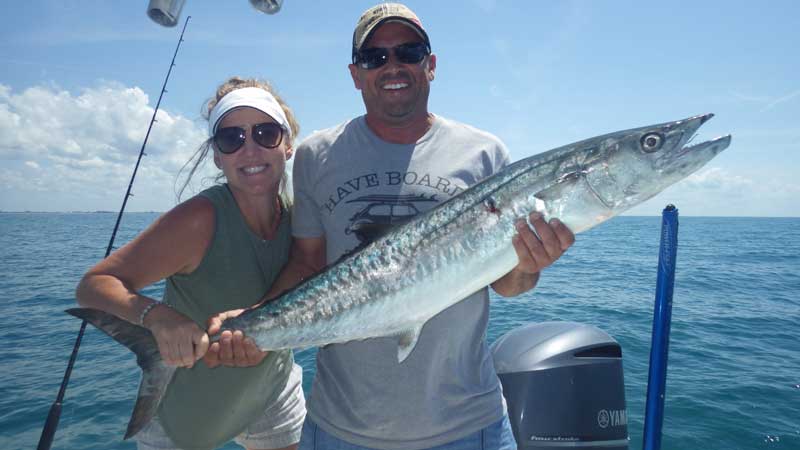 With slightly cooler water temps than normal, the spring fishing is going strong.

Inshore fishing is host to just about as many species — snook, redfish, trout, Spanish mackerel and flounder.

Large quantities of bait fish are found both inshore and offshore, the perfect recipe to bring in the predatory fish. Look for diving birds as they feed on the massive amounts of bait. The birds will lead you to the fish.

On my Southernaire charters, we are doing a lot of catch-and-release fishing. Snook fishing is probably the best it can be right now. Seeing 20-40 fish reeled to the boat during a morning charter is common. And since snook are catch-and-release right now, they are all set free.

For fish to eat, I’m targeting spotted seatrout. Most catches are 16-22 inches. For clients looking to take a fish or two home for dinner, the trout fit the bill.

Spanish mackerel is another species we’re catching now that works in the frying pan. Finding the fish schooled up around structure or deep flats is exciting, as they tend to rocket out of the water when feeding on baits. They also put up one heck of a fight on light spinning gear.

Lastly, catch-and-release redfish action is pretty good. Free-lining live shiners around oyster bars and mangroves is yielding a bite for my clients.

Jim Malfese at the Rod & Reel Pier is still seeing sheepshead being reeled up, although he believes it’s the tail end of that bite until next winter. In its place is the immergence of mangrove snapper. The popular fish are starting to take up residence under the pier deck.

When the bait schools are present around the pier, Spanish mackerel and jack crevalle are being caught. If you plan on targeting jacks, Malfese advises using heavy gear, as these jacks are 15-20 pounds.

Lastly, targeting catch-and-release snook is sporadic at the R&R, but “Fese” says it will steadily improve as summer approaches and the water temps rise.

Capt. Aaron Lowman is finding good action for his clients over hard bottom in Tampa Bay. Big macks and bluefish are lacerating baits as they swim on the surface. Macks and blues hit hard and fight to the end, which is great action on light tackle.

Fishing the flats of Tampa Bay also is proving to be good for Lowman. Catch-and-release snook action is strong, as is the catch-and-release redfish bite. For the linesiders, casting baits up around the mangroves works well. Working a mullet school in the bay is producing the best action on reds.

Finally, spotted seatrout are filling the coolers for Lowman’s clients when working over deep grass flats during higher tides.

Capt. Warren Girle is fishing offshore ledges and other structure when the winds are light and the seas calm. Kingfish are the highlight offshore, with 10-20 pound catches. Free-lining live shiners on a wire rig is attracting the bite. Also while offshore, Girle is bottom fishing, resulting in mangrove snapper, Key West grunts and groupers.

Moving inshore, Girle is mixing catch-and-release snook with catch-and-release redfish. Lastly, spotted seatrout are coming to the hook, which is especially good for those who want to bring something home for dinner.

Capt. Jason Stock is into the action on blackfin tuna. Fishing offshore for these torpedoes is yielding respectable numbers of fish, as well as some good-sized ones.

While targeting tuna, the kingfish bite is beginning to fire up. Kings in the 20-pound range are common.

Fishing wrecks offshore is where to find the elusive permit. Sight-casting live crabs to schooling fish is attracting a bite. Also on the wrecks are goliath grouper. They are catch-and-release, but quite a spectacle when reeled up to the surface.

One thought on “Cooler water temps don’t cool down fishing”