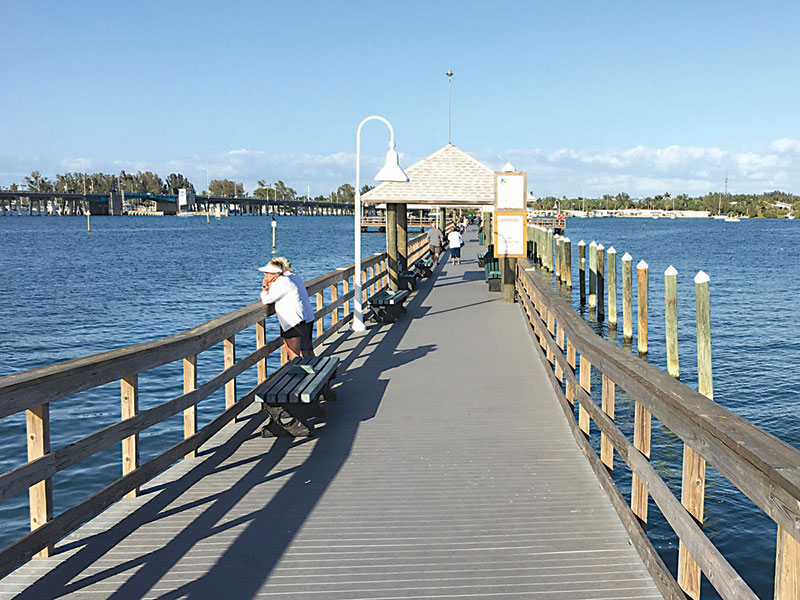 Mike and Carolyn Reis, vacationing from New York, look out March 30 over the waters of Sarasota Bay at the Historic Bridge Street Pier in Bradenton Beach. Islander Photo: Ryan Paice

It’s been a long time coming.

It’s been a long haul since the Bradenton Beach Community Redevelopment Agency first contracted with Technomarine Group in April 2017 to build and install a new floating dock for the Historic Bridge Street Pier.

But parts for Bradenton Beach’s floating dock were being inventoried in Gibsonton March 26 as city staff worked on the next step — to bring all the dock components to the city — in preparation for installation.

Before Hecker Construction can install the dock, the city must permit construction, including installation of pilings.

Bradenton Beach Police Chief Sam Speciale told The Islander March 26 that Eric Shaffer, a project manager for Hecker, informed him that day that an inventory of the dock parts would be completed and reported to the city within the week.

Hecker — now working directly for the city — was initially contracted by Technomarine to supply and install the dock components that were shipped from Spain to Hecker’s yard.

If Shaffer reports missing parts, Speciale said city attorney Ricinda Perry would contact Technomarine regarding what could be further failure to deliver the parts.

If every part is accounted for, Hecker will pair floats to the dock sections for assembly before delivery to Bradenton Beach via flatbed truck.

Speciale said March 13 that Hecker had begun assembling the parts.

Technomarine originally planned to use concrete pilings, but, in early March, Hecker submitted engineering specifications for composite pilings. Speciale said Hecker opted for wood pilings with poly wrap, and would submit specifications to Gilbert for the pilings permit.

Wood pilings are cheaper than concrete and composite piles, but more wood pilings would be required to support the dock. So new specifications are needed, according to Speciale.

The chief said Shaffer also was preparing a proposal for construction costs to present to community redevelopment agency members at their next meeting at 9:30 a.m. Wednesday, April 3, at city hall, 107 Gulf Drive N. The CRA is funding the floating dock.