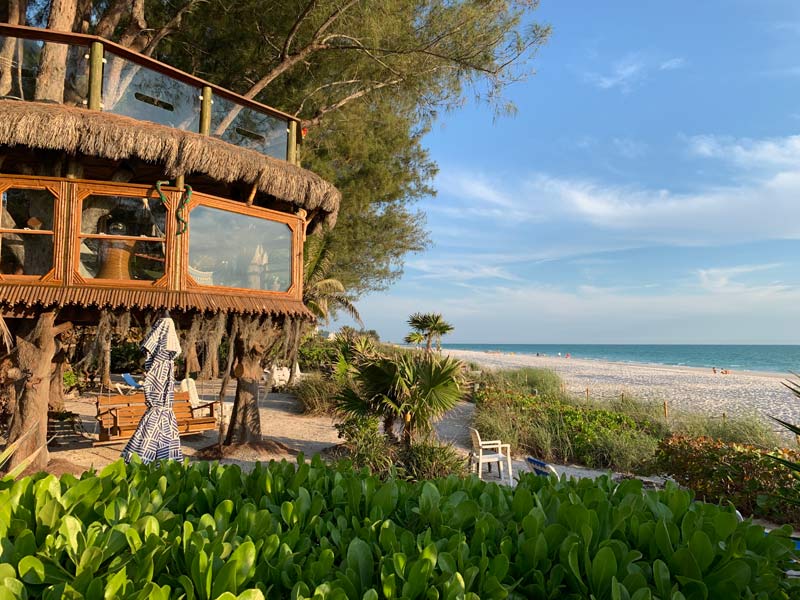 Sunset falls on the treehouse April 24 near the 29th Street beach access. The structure in an Australian pine tree is the subject of litigation between owners Lynn Tran and Richard Hazen and the city of Holmes Beach and the Florida Department of Environmental Protection. Islander Photo: Kathy Prucnell

12th Circuit Judge Ed Nicholas decided April 29 to move ahead with the owners’ 2013 case to declare a city setback unconstitutional before ruling on an enforcement case seeking to enforce city orders to remove the structure and pay fines.

“We’ll take the June 3 date off the calendar with regard to the city enforcement case and let the declaratory judgment case move forward first,” Nicholas said April 29 after the attorneys agreed.

Owners Lynn Tran and Richard Hazen built the two-deck structure in a tree at their residence, 103 29th St., without state or city building permits. They also operate four short-term rental units there.

Treehouse disputes have run through city code enforcement, the circuit and appellate courts in Florida and once to the U.S. Supreme Court since 2013 — with the owners losing at each juncture.

In the declaratory judgment case, the owners are challenging the constitutionality of the city’s setback from the erosion control high-mean water line.

Through attorney David Levin of the law firm Icard Merrill, the couple wants the judge to declare the rights of the parties to prevent Holmes Beach from enforcing its setback, claiming they relied on city assurances that no permit was necessary for the structure.

Former Judge Jannette Dunnigan ruled the treehouse owners’ reliance on a conversation with a building official about permitting for a treehouse was unjustified in a prior case. No permit was applied for and plans were submitted. Dunnigan’s ruling was affirmed by the 2nd District Court of Appeal.

Levin contends the city setback conflicts with state laws that allow exceptions for accessory structures, such as their treehouse.

According to attorney Jim Dye of Dye Harrison, a partner with city attorney Patricia Petruff, state environmental laws do not conflict with the city setback ordinance, but rather work with the ordinance.

“The 2013 case has come back around after a lot of things have been amended or already decided,” he said April 26.

At the hearing, Nicholas found the couple’s summary judgment motion moot, but left open the possibility of renewing it after the pleadings are in order.

To that end, the judge also ordered Tran/Hazen to amend their 2013 complaint within 20 days, denying the city’s motion to dismiss and granting its motion for a more definite statement.

Levin favored taking the constitutional case first because of the possibility of the judge ordering the treehouse demolished, saying he foresaw appeals from whatever side lost.

Dye had no objection.

The judge said if he were to rule to demolish it, he would stay such an order until the constitutional case was decided.

The city was alerted to the treehouse construction in 2011 by an anonymous complaint. A city code enforcement officer referred the matter to Florida Department of Environmental

The couple attempted to negotiate an after-the-fact permit with the DEP but that failed when the city refused to sign off, objecting to the treehouse within the 50-foot setback from the erosion control line. The line replaces the mean high-water line on renourished beaches in Florida.

Three other treehouse cases are pending in the 12th Circuit state court and one case is in the U.S. District Court, Middle District of Florida, in Tampa.

One pending case in state court is the city’s lawsuit against Tran and Hazen to enforce a 2016 order to fine the owners $50 per day and remove the treehouse. The city wants the court to enforce the removal and fine that has accumulated to more than $67,000.

Also pending are Tran/Hazen-initiated lawsuits in state and federal courts. A 2018 state court case alleges negligence, injunctive relief and violation of rights. In federal litigation served on the city in March, the couple is claiming federal civil rights, due process and equal protection infringement.

These cases were brought pro se by the owners, meaning without an attorney, and are in the initial pleading stages.

A hearing in the city’s enforcement case is set for May 9 at the judicial center in Bradenton..

The federal proceedings will be held in Tampa.