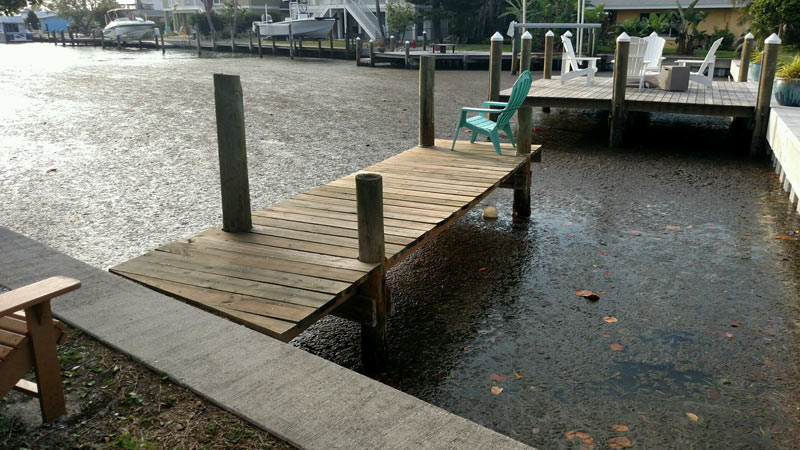 Brown algae blankets the Key Royale canal at 65th Street during the last week of March and first week of May. Islander Photo: Christine Wright At the end of April and beginning of May, pad-like algal blooms pushed into waters around Anna Maria Island, hung around for about a week and receded.

But then the unwanted visitor came back strong and stinky.

The Florida Department of Environmental Protection began testing May 9 in Holmes Beach to determine the toxicity of the large brownish oblong algae mats.

Also May 9, DEP spokeswoman Weesam Khoury would not speculate on why the bloom was occurring and did not know when testing results would be made available.

The samples will be analyzed in Tallahassee for toxicity and algal type.

Similar testing from Lake Okeechobee, along the Calaloosahatchee River to Fort Myers, has been performed in the past month. And, in places, whitish mold has grown on the brown pads.

As to why sites were chosen, she said there were several reports from Charlotte County to Manatee County that prompted testing for six types of “microcystins,” including toxic cyanobacteria, known as the blue-green algae, and three other toxins.

“Residents and visitors are always advised to avoid coming into contact with algae and to stay out of the water where a visible bloom is present,” Khoury said in a May 9 email, adding the DEP will monitor and retest persistent blooms.

In Sarasota County, the DEP identified Lyngbya wollei, a large diameter cyanobacteria with the same thick sheath and dense mats, according to Stephannie Kettle, of Mote Marine Laboratory.

Mote, as well as the Florida Fish and Wildlife Conservation Commission, research and monitor another algae, Karenia brevis, also known as red tide, which pushed into southwest Florida in high concentrations between August 2017 and January 2019, causing massive fish kills and deaths of manatees, dolphins and other marine animals and birds in the hundreds.

The current algae is not red tide.

Also testing the water in May was the Florida Fish and Wildlife Research Institute, a branch of the FWC.

Results from the FWRI testing showed no harmful algal blooms, she said. Volunteers will continue sampling the water and may add other test locations.

Although the stench improved and no HABs were identified on Anna Maria Island the second week of May, some people living near the algal blooms expressed their disgust.

“Last week, after it sat in the sun, it was really strong. Like sewage. Even inside our house,” Holmes Beach resident Christine Wright said May 9.

Titsworth agreed, “People are hating it.”

She has asked Barney Salmon, the city director of development services, to research the outbreak.

“I firmly believe it comes from too much nutrients,” the mayor said, adding “It happens a lot.”