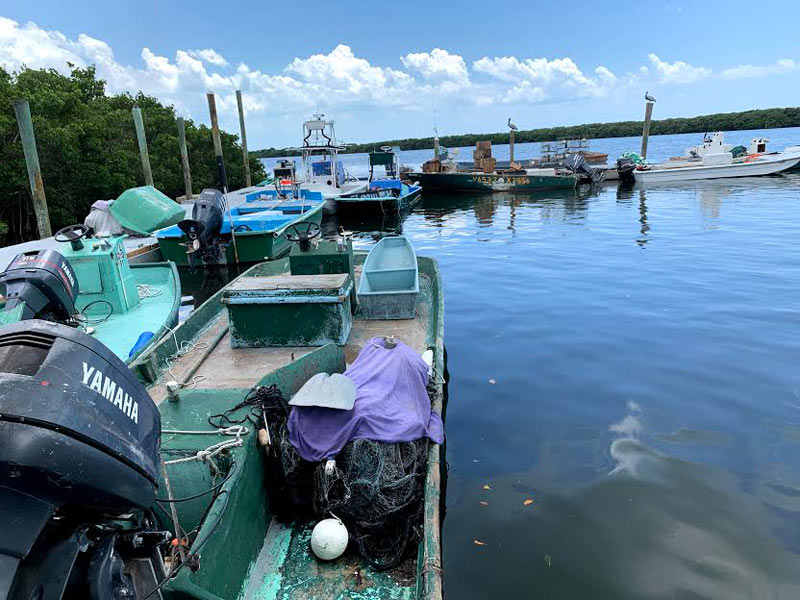 On the Cortez waterfront at 119th Street May 16, idle boats hold traps, ropes, buoys and other crabbing gear — a day after the annual stone crab season came to a close in Florida. Islander Photo: Kathy Prucnell 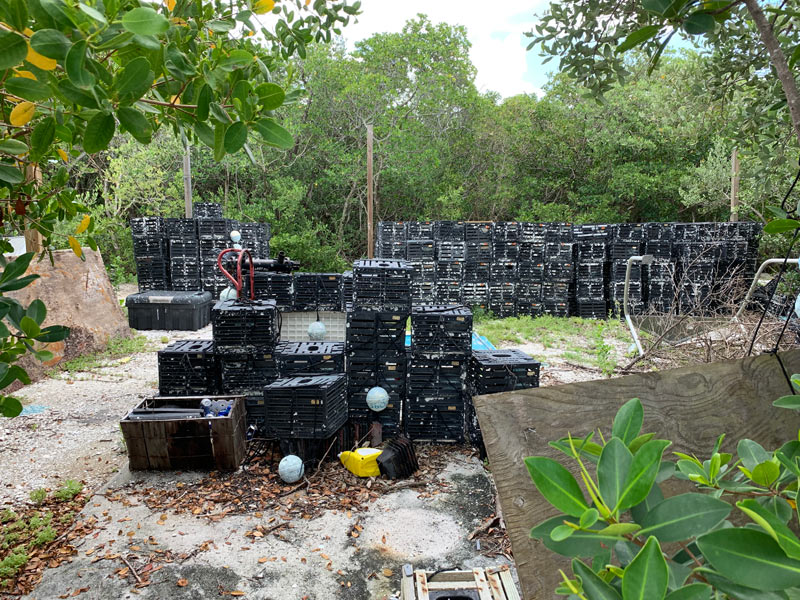 Idle stone crab traps are stored May 16 alongside the 119th Street docks following the end of the 2018-19 season.

The 2018-19 stone crab season was one of the worst in Florida history and “a lot of it is due to the red tide.”

That was Fish and Wildlife Research Institute researcher Ryan Gandy’s assessment May 16.

The research arm for the Florida Fish and Wildlife Conservation Commission, the FWRI, among other researchers and fishers, placed blame on the toxicity of red tide and the stranglehold of low oxygen in the water that resulted from high concentrations of Karenia brevis.

The stone crab fishery closed for the season May 16. FWC limits the season to five months annually to sustain the fishery. It will reopen Oct. 15.

“Most fisherman stopped by the first of the year,” Gandy said about the stone crab harvest.

“There were no crabs to be caught from the mouth of Tampa Bay to Marco Island,” he added.

John Banyas, who owns the Swordfish Grill & Tiki Bar, N.E. Taylor Boatworks and the Cortez Bait & Seafood market in Cortez, is licensed for about 2,500 crab traps, but didn’t put them all out after testing and suspecting a bad year.

No crabs found along local shore

Paul Moore, who, with Banyas, prepares, checks and harvests the stone crab claws from the traps set in the Gulf of Mexico, agreed with Gandy’s assessment in a May 15 interview with The Islander.

“There was nothing off our local shore,” said Moore, who started crabbing 39 years ago with his father, fishing between St. Pete and Boca Grande for the now-defunct family business, Moore’s Stone Crab Restaurant on Longboat Key.

Different this season, he said, was the lack of stone crabs in local waters.

Moore spoke to others in Sarasota, Venice and Fort Myers, he said, who faced similar issues.

“Anywhere red tide went, the crabs were driven away,” he added.

“Earlier in the season, we did catch good crab up there,” he said, but that meant a lot of travel, more fuel and expense.

At Mote Marine Laboratory in Sarasota, Phil Gravinese studies the plight of stone crab with experiments in tanks, as well as from a dock in Sarasota Bay at Mote.

A year ago, Gravinese said the fishery is cyclical, declining overall since 2000. At the time, he cited a variety of possible causes — environmental changes, hurricanes, overfishing since 1996 and an influx of octopi, the stone crab’s archenemy.

In April, Gravinese and other researchers at Mote published “Karenia brevis causes high mortality and impaired swimming behavior of Florida stone crab larvae” in the journal of Harmful Algae.

The study referenced FWC data showing a 63% drop in landings — from 322,807 pounds in 2015 to 118,079 pounds in 2018 — and concludes high concentrations of red tide caused stone crab larvae to die, interfered with the reproductive cycle and reduces the fishery for two-three years.

The study also concluded that larvae can’t swim away from highly toxic blooms with K. brevis concentrations of more than 1 million cells per liter.

Mote found larvae would die within 48 hours in high concentrations of K. brevis — and noted more than 90 million cells per liter were found at the height of red tide in Sarasota.

“On this coastline, the research suggests the decline in stone crab resiliency because red tide is recurring over the years,” Gravinese said in a May 16 interview with The Islander.

In his position at FWRI, Gandy monitors stone crab test lines throughout the state and records landings and market values for the FWC.
Gravinese and Gandy work together, share data and conclusions.

Based on early landings reports, Gandy projected there would be less than 2 million pounds of stone crab claws — only claws 2 3/4 or larger can be legally harvested — 700,000 pounds lower than the average year. And while the market values must be reported, Gandy said he doesn’t project them.

“I don’t think the statewide decline can be attributed to red tide,” Gravinese said about Gandy’s projections, adding the reason is likely due to fishery management.

Gandy equivocates. “We cannot say for certain the red tide impacted the statewide catch of stone crab this season. Some areas had good catch and other moderate catch,” he said.

Over the past 20 years, the state has experienced lower landing years independent of red tide.

Asked whether FWC is considering changes in stone crab regulations — such as shorter seasons or stricter restrictions — Gandy said no. While the FWC changes its rules from time to time, he didn’t see any coming.

Looking to the future

The Mote and FWC/FWRI studies also point to a few bright spots.

Larvae exposed to low concentrations of red tide were unaffected, according to Gravinese.

The FWC started test lines in 1988 with traps in the Tampa Bay area, including a line off the north end of Anna Maria Island, and added lines in southwest Florida in 2005 and the Big Bend region in January 2006.

A Pine Island/Boca Grande test line was installed in August 2018 after the red tide intensified.

The FWC worked with Pine Island fishers to set lines of 20 traps offshore to gauge the impact of red tide on the stone crab population, with traps in varying depths in mid-August. The data collection ended in October.

“Red tide clearly impacted the stone crab fishery from Manatee through Lee counties this season,” including a stone crab die off near Pine and Sanibel islands, Gandy said of the results.

“We had the hurricane in 2017 and red tide this year,” he added, and called it a “tough couple years,” from which the fishery can “hopefully” bounce back.

One thought on “Cortez stone crab season — one of the worst”