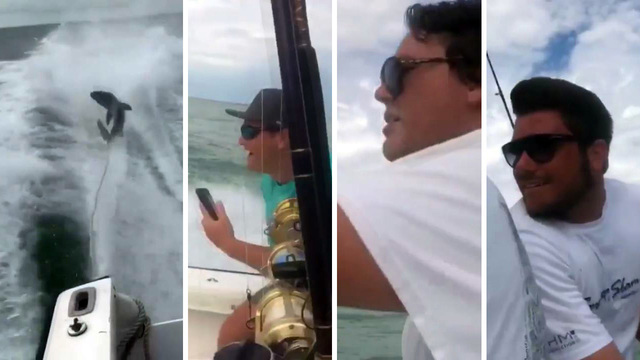 Screenshots from the viral video of a shark-dragging that occurred near Egmont Key in June 2017 show the fishermen as they watched the shark being dragged behind their boat. Islander File Photo

A judge’s denial of defense motions sets the stage for a shark dragger’s trial.

Robert Lee Benac, 30, was in a courtroom in the 13th Circuit Court May 9 with attorney Justin Petredis, asking that his case be dismissed for lack of facts supporting a felony animal cruelty charge. Alternatively, they sought to sever the state’s prosecution of a misdemeanor charge for shooting a shark with a firearm.

Benac is the last defendant in the shark dragging case stemming from a video that appalled animal rights activists and state officials — up to the governor’s office — the summer of 2017.

Judge Mark Wolfe denied the defense motions during an hourlong hearing, according to public information officer Mike Moore. The judge confirmed a previously set June 24 trial and set a pretrial for June 18.

The case arose from the video showing the men laughing and dragging a shark off the back of a boat at high speed.

Benac, Michael Wenzel, Spencer Heintz and Nicholas Easterling, were on the boat and fishing near Egmont Key in June 2017, where other videos showed them spearing and shooting sharks.

Wenzel, the boat’s captain, pleaded guilty in February to a misdemeanor charge of animal cruelty and using an illegal method to catch a shark. He was sentenced to 10 days in jail, 11 months probation, including 100 hours of community service, and fined $2,500. Wenzel also lost his commercial fishing license for five years.

In May 2018, Wolfe dismissed charges against Heintz after prosecutors agreed his actions were not criminal.

Easterling, who grew up on Anna Maria Island and cooperated with authorities, was not charged.

The Florida Fish and Wildlife Conservation Commission assisted in the investigation.

Benac is the son of Manatee County Commissioner Betsy Benac.

All proceedings will be held at 401 N. Jefferson St., Tampa.