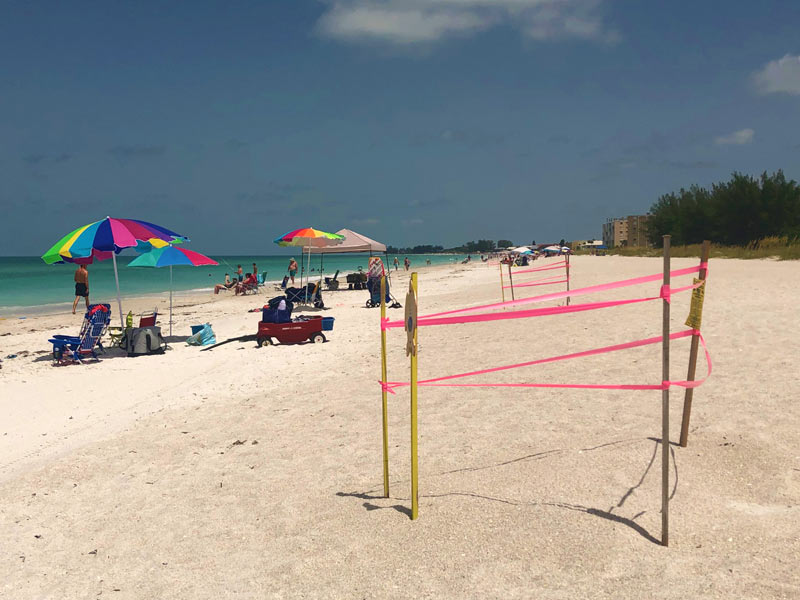 Red, white and blue color the Fourth of July.

This summer, Anna Maria Island Turtle Watch and Shorebird Monitoring is asking people to set their phones to “red” if they are on the beach after dark.

The request is not for patriotism, but for sea turtle safety.

Suzi Fox, AMITW executive director, said before going onto the beach at night, people should go into the “settings” menu of their smartphones and change the display to red.

“All smartphones have the capability to do this,” she said. “Just Google it.”

See red, save turtles
AMITW asks people on the beach at night to change the settings on their smartphones to a red filter, so light from the screen will not interfere with wildlife, including nesting sea turtles.
On an iPhone, go to “settings,” then “accessibility,” then scroll to “display accommodations,” select “color filters” and click “on.” From there, a red color filter can be selected.
On an Android phone, select “settings,” then “display,” and click “night light” to filter out blue light and enhance the red light.
— ChrisAnn Silver Esformes

Fox said June 25 there had been five adult sea turtle disorientations this sea turtle nesting season, which began May 1 and runs through Oct. 31.

In 2018, there was one such disorientation.

Female sea turtles, which mostly nest at night, only leave the water to nest on island beaches. So any distraction on land could lead to a false crawl — a failed nesting attempt.

Fox said one type of distraction is people using their cellphones on the beach at night to follow sea turtles for photos or video. They prevent mature females from laying eggs before returning to the Gulf of Mexico.

Tracks on the beach indicate that sea turtles are leaving the water and attempting to nest, but being distracted by human interference.

“You can tell from the tracks where someone has been walking alongside a turtle, either before or after nesting,” she said. “I documented a disorientation this morning where I could see the turtle walked 200 extra feet. That’s a lot of work for a turtle to put in.”

Fox said she understands the draw for people visiting the beach at night, but the shoreline is shared with wildlife.

Also, illegal fireworks are always a concern for turtle watch, but especially on the Fourth of July, when more people are on the beach at night.

Another concern is trash left on the beach and in over-flowing receptacles at beach accesses, which can draw predators that chase nesting birds and eat eggs. Turtle watch, in addition to monitoring sea turtle nesting, monitors nesting shorebirds.

Also, gear left on the beach overnight, including canopies, tents, chairs and rafts, can be hazardous to nesting sea turtles.

Obstructions on the beach can lead to a failed nesting attempt, injury or death by drowning if the sea turtle becomes trapped underneath a chair or drags it into the water.

Fox said many locals are familiar with best beach practices, but visitors may not know the rules.

“Families with kids often are very excited to learn about the sea turtles,” Ruby said June 25. “We do our best to make sure they are educated about how to treat the beach and its wildlife with respect.”

Fox said the educational partnership between AMITW, residents, visitors and businesses is key to conservation.

“It’s all about education,” she said. “Once people know the results their actions could cause, they usually want to do the best they can.”