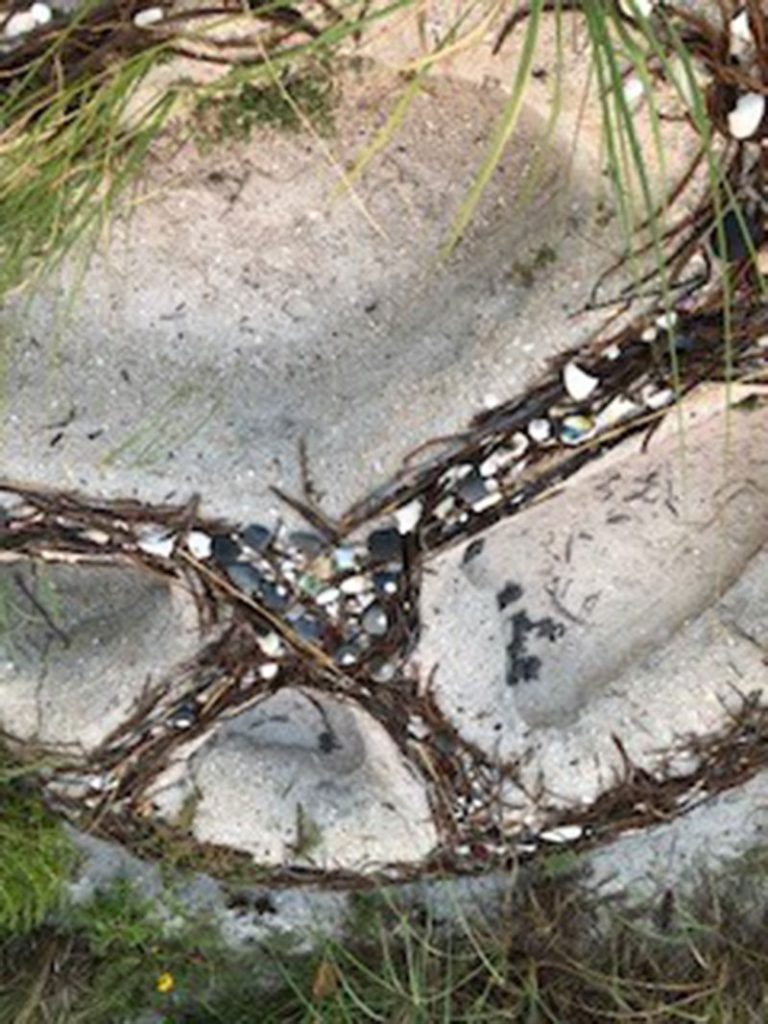 Sixteen hatchling loggerheads were discovered Aug. 9 trapped inside a peace sign sand sculpture on the beach near 52nd Street in Holmes Beach. The sea turtles hatched overnight from a nest on the beach near Martinique South condominium, then disoriented away from the water, toward the sand sculpture. They were later released by AMITW to the Gulf of Mexico. Islander Photo: Courtesy AMITW 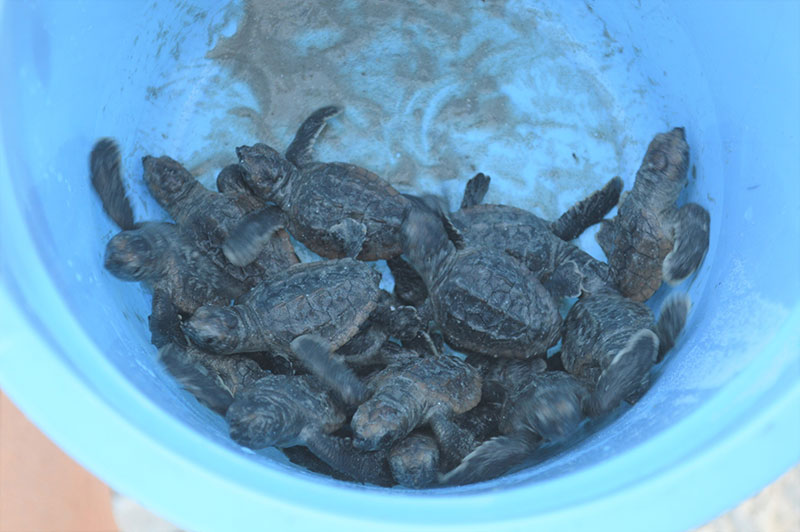 loggerhead hatchlings are rescued and held in a bucket after being trapped in a sand sculpture Aug. 9 by AmitW volunteers. the 16 tiny sea turtles were released on the beach, where they leave their imprint on the sand and make their own way to the gulf of mexico. islander Photo: chrisAnn Silver esformes

Most nesting is finished, but many hatchlings are yet to emerge.

Anna Maria Island Turtle Watch and Shorebird Monitoring reported Aug. 9 that 513 nests had been laid on island beaches since nesting season started May 1.

“We are approaching another record-breaking season,” Fox said. “Now we just have to make sure lighting is compliant so the hatchlings make it to the water.”

Lighting is a concern for turtle-watchers.

Hatchlings, as with nesting female sea turtles, follow their instincts toward the reflection of the moon and stars on the Gulf of Mexico. Light visible from the shoreline can disorient them, leading to predation, dehydration, exhaustion and death.

Beachfront properties are required to have low, shielded exterior lighting that meets Florida Fish and Wildlife Conservation Commission standards and indoor lights must be turned off or shielded by curtains or blinds.

Fox said her volunteers — who walk the beach each morning during nesting season, looking for signs of nesting or hatching activity just after sunrise — said some interior lights are unshielded, which can lead to disorientations.

“It’s difficult because the turnover at resorts and rentals is high,” she said. “A lot of people are here having fun and just don’t know they are supposed to close their blinds.”

According to Fox, most of the island is in compliance with sea turtle regulations for lighting, but some property owners — mostly in Bradenton Beach and Holmes Beach — are still in the process of upgrading to turtle-friendly bulbs and fixtures.

She said volunteers walking the north end of Anna Maria reported nearly 100 nests as of Aug. 7 — nearly twice the number of nests documented there in 2018.

“People have been really good about their lights up there,” adding that turtle watch volunteer Debbie Haynes is also the city’s code compliance officer.

Bill Booher, a turtle watch volunteer who walks a section of the beach in Anna Maria, said he’s spotted 20 nests on his patrol so far this season.

“I’m only having the best season I’ve ever had,” Booher said. “We can speculate as to why we are getting so many nests. But we don’t really know. So all we can do is be thankful and appreciate how lucky we are to have our turtles here.”

FacebookTwitterSubscribe
We use cookies to ensure that we give you the best experience on our website. If you continue to use this site we will assume that you are happy with it.Ok