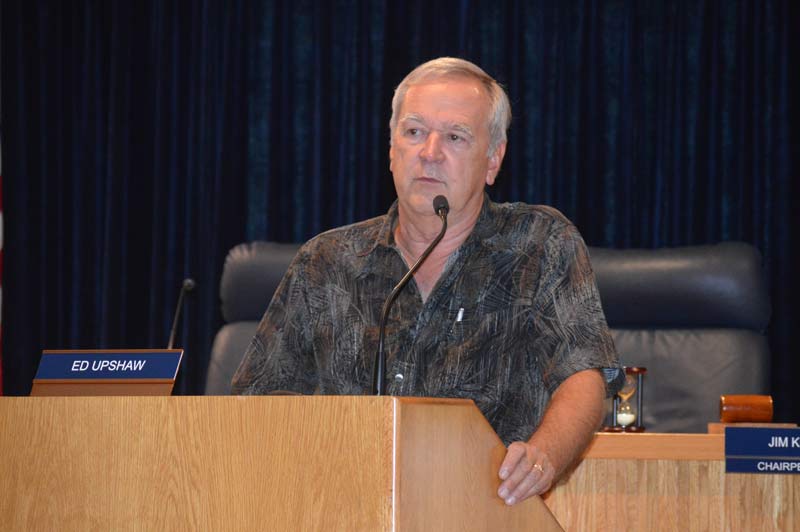 Call it a primer for the questions on the Nov. 5 Holmes Beach ballot.

The city hosted a town hall meeting Oct. 23 led by Ed Upshaw, chair for the now-defunct charter revision commission. A CRC is elected every five years to review the charter for possible changes and disbands when its work is done.

Upshaw said, “The charter is the document required by the state that defines what the city is.”

The 2019 CRC met for five months and recommended eight amendments.

Upshaw said the first question would amend the charter to consolidate and revise the legal description of to the city to include the Kingfish Boat Ramp and Grassy Point Preserve — land annexed by the city but not yet included in the city’s boundaries in the charter.

Amendment 2 would require a supermajority vote of the city commission — four of five commissioners — and a referendum in the next general election, approved by a majority of voters, in order for the city to sell, vacate, convey, transfer or abandon real property or rights of way.

One town hall attendee asked why a referendum would be required for such a transaction if it was passed by a supermajority vote of the commission.

Upshaw said a referendum adds an extra layer of security that the commission is acting in the peoples’ best interest.

“This makes it much more difficult for things to get out of control,” he said.

Upshaw said amendment 3 would allow budget transfers up to $100,000 to be approved through a resolution, rather than an ordinance, which requires two readings and public hearings. He said the resolution process still requires a vote of the commission, but it streamlines the process of transferring budgeted funds from two meetings to one.

Amendment 4 would require a vote of the commission to terminate a department head. Currently, the mayor has the power to remove employees without commission concurrence. Upshaw said this change would provide protection for employees.

Amendment 5 would change the language in the charter to require the city treasurer presents the annual audit. The current charter states the treasurer also prepares the audit, which is not accurate.

“The preparation of the audit is done independently,” Upshaw said. “That’s the whole point of the audit.”

During gallery comments, Gail Tedhams asked Upshaw the significance of having such positions in the charter.

He said removal also would split the building and public works departments, which no longer operate as one entity.

Pam Leckie addressed a question to the removal of the human resources department. She served on the CRC in 2014 that added the department to the charter. She asked why the 2019 CRC recommended removing the department.

Upshaw said the Florida League of Cities suggested the change since human resources would not be required if the city had financial difficulties.

He said the department would not be eliminated, just removed from the charter.

Amendment 8 would transfer election candidacy filing responsibilities from the city clerk to the Manatee County Supervisor of Elections, as is the case in Anna Maria and Bradenton Beach.

“This would simply make everything happen over at the county,” Upshaw said.

Information about the candidates and sample ballots can be found on the SOE website at www.votemanatee.com.