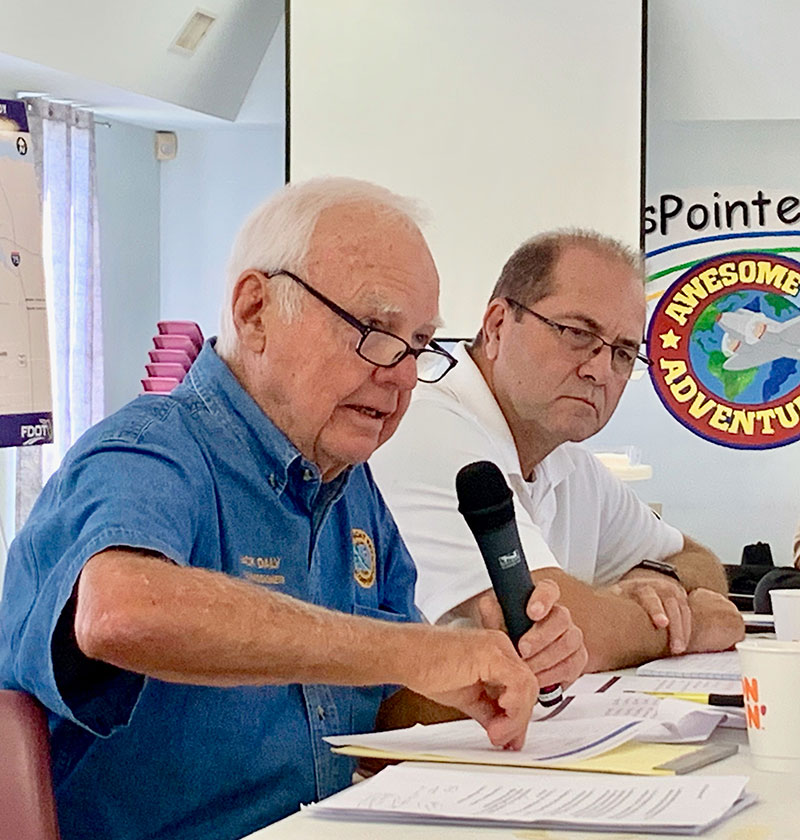 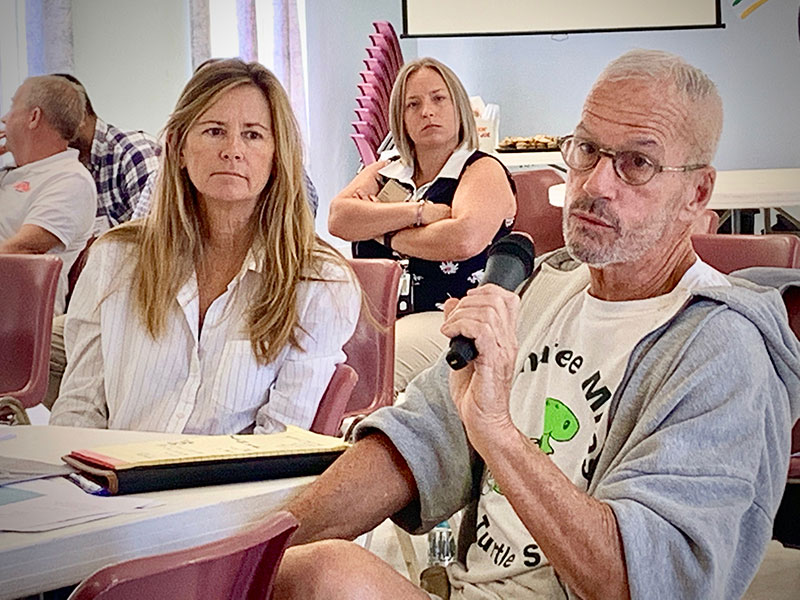 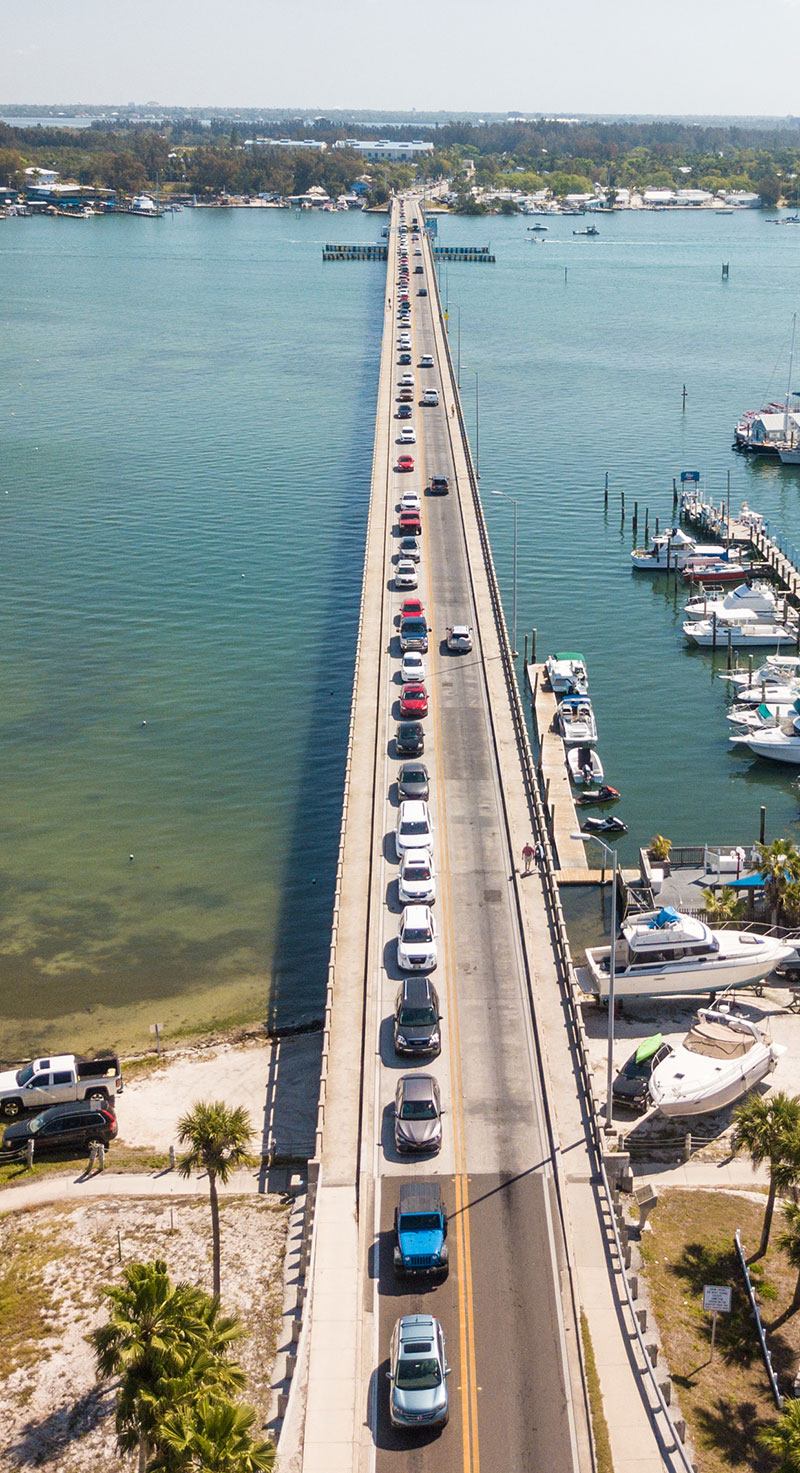 traffi c heading to anna maria island on the cortez Bridge backs up to cortez and beyond on a Sunday morning in march 2018. islander file Photo: Jack elka

The traffic problem that drew the most discussion at the latest meeting of the Sarasota/Manatee Barrier Islands Traffic Study steering committee wasn’t even on the final list of solutions.

The intersection of Cortez Road and Gulf Drive in Bradenton Beach wasn’t included in the ranking because officials have not decided how to improve it, so no one knows how much a fix would cost, Nathan Kautz, Florida Department of Transportation engineer said at the Sept. 27 BITS meeting.

Knowing how much it would cost was a requirement to be listed, Kautz said.

“That intersection represents the most critical intersection with respect to traffic issues,” Daly said at the meeting, which was held at CrossPointe Fellowship in Holmes Beach. “I’m not being critical, but I am expressing some exasperation.”

Daly raised the same concern when the BITS steering committee met in April.

Chappie joined Daly in pointing to the intersection at the Sept. 27 BITS meeting.

“That intersection is the main problem right there,” he said. “And it’s pretty obvious.”

David Hutchinson, executive director of the Sarasota/Manatee Metropolitan Planning Organization, said there are no easy solutions.

“There’s not much space there,” he said. “That’s the real problem. That’s a very tough location.”

DOT engineer Kautz said the intersection would be added in last place to the 20-item priority list and would indicate that a price estimate is not available.

“It should be on the list,” Harmer said. “We know that’s the biggest chokepoint on the whole island.”

The DOT launched BITS early in 2017 at the request of the MPO, the regional planning group. The MPO includes a 17-member board of elected officials and a professional planning staff.

The study, which was budgeted for $675,000, consists of three parts, two of which have been completed. Phase 1 examined prior studies, and Phase 2 listed potential improvements and recommendations.

The ranking aimed to show “which projects are going to give us more bang for the buck,” said Leigh Holt, the MPO’s strategic planning manager.

Some options, she said, will not be popular with area residents.

“This is a menu,” she told the committee. “Not everything on this list is going to be politically correct. That’s what you’re going to have to deal with when you go back home.”

The top-ranked project is an electronic message board at 75th Street and Manatee Avenue and another one at 75th and Cortez Road.

No. 2 is establishing rideshare pick-up and drop-off locations.

The third-ranked recommendation is to reduce the configuration of the intersection at the north access to the Manatee Public Beach parking lot in Holmes Beach.

Replacing the Anna Maria Island, Cortez and Longboat Pass bridges was ranked No. 8.

The DOT already has embarked on some projects, including:

A self-admitted example of a project that would be a hard sell is No. 5: Restrict personal vehicle use to create a “car-free zone” on the islands.

“That’s extreme,” Holt told The Islander after the meeting, noting that’s one of those “politically incorrect” suggestions she mentioned earlier.

Consultant Frank Domingo, who conducted the study in connection with the DOT, told The Islander that projects were listed in terms of their desirability, not necessarily by how likely they are to be adopted.

“There’s never going to be one big fix,” he said. “It’s a bunch of little fixes. It’s more important to reduce the number of cars. Period.”

Domingo also spoke to the committee about the results of a travel study conducted from 2016-18.

The traffic study also found that 80% of AMI traffic was from within Florida and 20% originated out of state. The city of Anna Maria had the highest percentage of out-of-state traffic at 30%.

BITS plans to present project priorities to MPO committees Nov. 4 and to the full board of MPO members Nov. 18.

The MPO board will review the project priorities at its Jan. 27, 2020, meeting and submit its recommendations to the DOT March 15.

In the meantime, local elected officials have some fast work to do to meet the deadlines, something they acknowledged at the meeting.

“It’s going to be a challenge, but we can get it done,” Chappie said.

Holt, the MPO planning manager, told the BITS committee members they have “a great menu” from which to pick.

“You have choices,” she said. “You have to prioritize. There’s not enough money for everything.”

5) Location: Various. Strategy: Restrict personal vehicle use to create a “car-free zone” on the Islands.

Each bridge should have a flexible lane added to bridge typical section to accommodate future transit.

9) Location: Various. Strategy: Widen the existing bike lanes into cart lanes to allow motorized carts that are rented on the Island to travel outside of the general-purpose lanes.

17) Location: Bradenton Beach. Strategy: Construct the Anna Maria Island Trail through downtown Bradenton Beach. The proposed Trail typical section includes an 8’ sidewalk on one side of SR 789, two 11’ travel lanes, and buffers between the sidewalk and sidewalk to channelize pedestrians to specific crossing locations. The Trail is being developed by the City Engineer for Anna Maria, Holmes Beach, and Bradenton Beach and funding applications have been submitted to FDOT and other agencies for future design and construction.

20) Location: Lido Beach. Strategy: Beach-based shuttle by using the vehicle/pathway lanes at the back of the beach next to the berm to allow all-terrain cart-shuttle services along the beach.