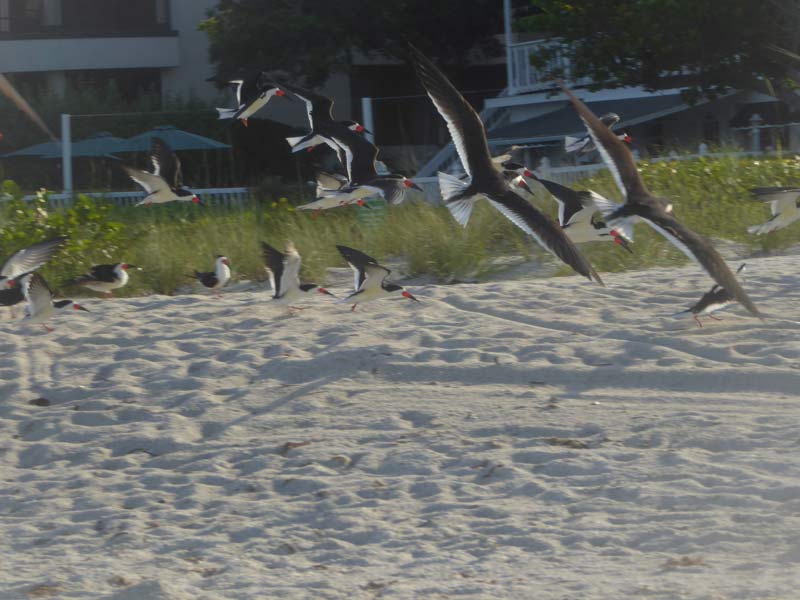 A scoop of black skimmers takes flight in late May on the beach in Holmes Beach. Islander Photo: Courtesy Pete Gross

Fox said black skimmers, which usually nest early summer and depart for their summer migration in September, did not nest in 2019, but remain in colonies on Anna Maria Island beaches.

She said the Florida Fish and Wildlife Conservation Commission is concerned with the unusual behavior and plans to investigate the matter.

The black-and-white birds that wear a touch of orange on their beaks can be seen flying low over the Gulf of Mexico, skimming for food in the water along the shoreline.

As of Oct. 31, about 200 skimmers remained in several colonies, moving between Anna Maria, Bradenton Beach and Holmes Beach.

Fox said the problem is not just with skimmers. Other migratory birds, including least terns and American oystercatchers, also have not nested on island beaches in 2019.

“We’re just not seeing them anymore,” she said.

She said she is concerned that people are disrupting the birds, by chasing them or otherwise interfering with their habitat.

“We need to educate people about the birds so they understand it is not OK to mess with them,” Fox said. “And with a little help from FWC, hopefully, our birds will be back and nesting next year.”

One thought on “Sparce season for shorebirds on Anna Maria Island”