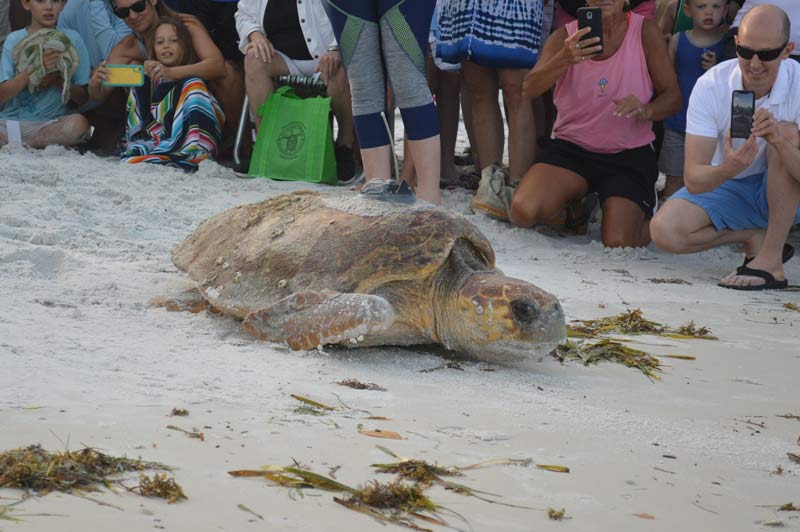 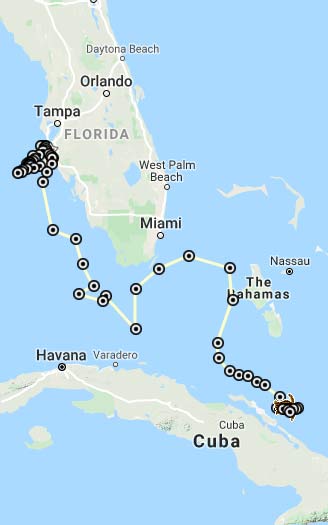 A screenshot from conserveturtles.org Oct. 31 shows the path in the Gulf of Mexico taken by Bortie, a loggerhead wearing a satellite tracking device since she nested June 20 on Cortez Beach in Bradenton Beach.

Anna Maria Island’s contestant might not have won the race, but she’s still going strong.

During the peak of loggerhead nesting season, Anna Maria Island Turtle Watch and Shorebird Monitoring partnered with the Sea Turtle Conservancy to satellite tag a sea turtle in its Tour de Turtles, a program to tag and release nesting female loggerhead, hawksbill and green sea turtles for migration data.

The tagged loggerhead — named Bortie Too for Bortell’s Lounge in Anna Maria, AMITW’s sponsor — was held overnight and tagged with a satellite tracker on June 20. She was released June 21 after nesting on Cortez Beach in Bradenton Beach.

The tracking device showed the Sea Turtle Conservancy and AMITW that Bortie Too nested a second time on the beach in Holmes Beach and traveled south, to the seagrass beds north of Cuba, to land fifth place in the tour, which tracks distance covered through Nov. 1 by 13 tagged sea turtles.

The tracking device continued transmitting data from the tagged turtles after the race ended and will do so until it falls off or becomes damaged.

In 2015, AMITW’s tagged turtle Amie lost her transmitter shortly after the start of the marathon.

Bortie Too’s predecessor, Bortie, finished in 10th place out of 14 in 2018, but won the online peoples’ choice award on the STC Facebook page.