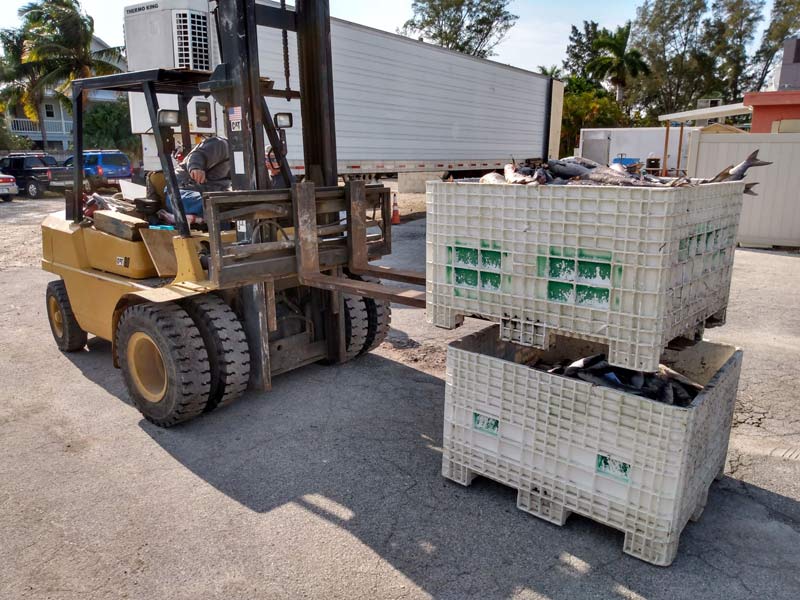 The parking lot at Cortez Bait & Seafood Market on Cortez Road in Cortez serves Dec. 18 as an offloading sight for mullet fishers, who trailer their day’s catch in their boat, where they unload and ice their mullet into the fish house bins. The bins are then loaded into refrigerated trailers. The market serves as an alternate processing site for the main fish house on the waterfront. Islander Photos: Mike Tokars 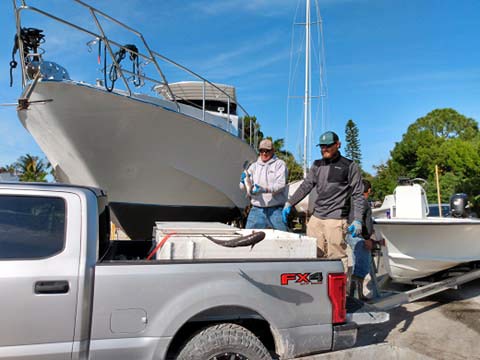 A father and son team from the east coast of Florida toss their daily catch of mullet from bins in their truckbed to bins in front of the Cortez, Bait & Seafood fish processing plant at 4628 119th St. W., Cortez.

Fishers were hauling in mullet during the cold fronts that went through Manatee County the week of Dec. 15.

The surf was rough and several accidents occurred, according to commercial fishers.

The wind coming onshore on Longboat Key Dec. 20 was blowing 30 mph, probably 7-8 knots, and the Gulf of Mexico was turbulent.

Mike Brady of Fort Pierce said he and his son, Andrew, witnessed three accidents that day. One involved a fisherman thrown into the water as his vessel collided with a piling.

Two others involved boats fighting the current while their nets were caught on the Gulf floor, and a man was pulled into the water, but there were no distress calls to the U.S. Coast Guard.

And fishers were catching what mullet they could find in the rough conditions.

Walker has worked as a mullet fisherman for 22 years. He called a “lick” a small catch, while a “load” would be a big catch.

When there’s a load, the parking lock at the Cortez, Bait & Seafood Retail Market, 12110 Cortez Road W., is full of trucks towing trailers loaded with the commercial fishing boats, which carry the catch on board after a good day on the water.

“No loads this year,” said Walker, who still anticipated big catches to come.

“Tomorrow will probably be a load day,” he said.

He added, “There’s a cold front coming in. We fish the fronts. It’s the only time they let us fish, when they come off the flats. There’s another front coming in this weekend.”

Walker and his crew fish everywhere from Jacksonville to Naples.

He told The Islander, “We caught fish for about 24 hours Dec. 18. We caught 2,500 pounds of red roe in the morning and 4,500 pounds more in the afternoon. It was a very short-lived run. I’m back home fishing in Port Salerno, but will come back after Christmas if fish are in the ocean.”

Balasis said he has been fishing for mullet since before high school. He brought a few guys with him to help work the run.

Balasis said thus far, the season had been a poor one for roe.

Processors say the red roe — the female eggs — is popular in Europe and Asia and demands the highest price, more money for the fishers than the male mullet, which carry white roe.

Fort Pierce’s Mike Brady said: “We caught some fish around Anna Maria. We followed the fish until they got offshore. Some of the other boats went farther. We went about as far as my boat can handle.”

Brady said the mullet fishing is still good in Tampa Bay, but he’s waiting on the weather.

Bad weather is typical for mullet fishing. When it’s nasty, the mullet get off the flats and “run” to the Gulf waters to spawn, according to Brady.

Catching the mullet before they spawn is the goal.

This is when the commercial anglers go into action.

Cold fronts with northwesterly winds and a dropping barometric pressure trigger the mullet migration from canals, backwaters and shallows in large schools.

According to researcher Ed Matheson of the Florida Fish and Wildlife Conservation Commission Fish and Wildlife Research Institute, the male and female mullet congregate during cold fronts and travel some 100 miles to the Continental Shelf to spawn. After a cold front, migration slows and the mullet await the next cold snap to move offshore.

When the mullet move offshore, commercial fishers head out on boats to catch the fish with cast- and seine nets.

The cold fronts that cause mullet to run sometimes bring bad weather, with big waves and strong currents.

But the weather isn’t always bad when fishers pull up roe.

Brady said when the wind is 15-20 mph, the fishing is nice off the beach with big “colors” of water where mullet gather.

Brady said, as of Dec. 23, they had not seen any good or easy days.

2 thoughts on “Mullet on the run, fishers running into rough weather, waters”