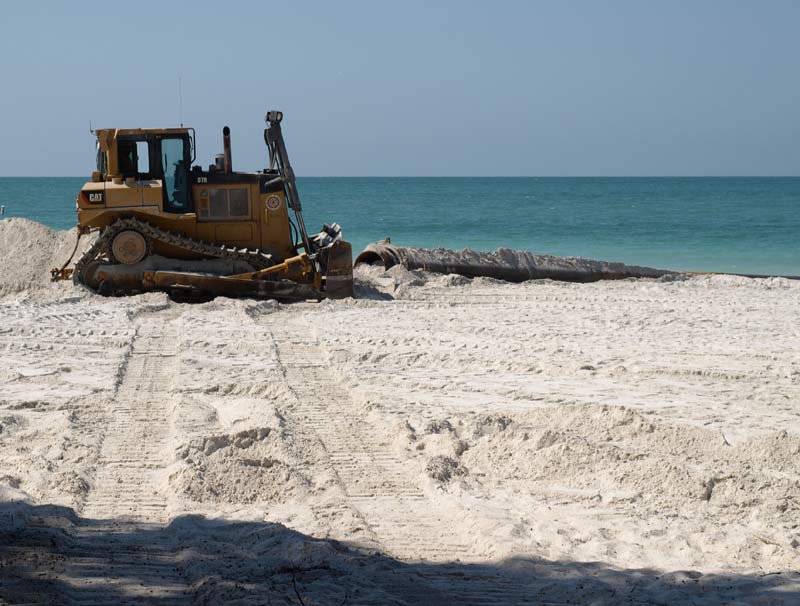 A bulldozer moves sand in on Anna Maria Island in April 2011, near the end of a beach renourishment effort. Islander File Photo: Lisa Neff

Anna Maria Island’s beaches wouldn’t be so impressive without a little bit of help.

The sandy shores people know and love in Anna Maria, Bradenton Beach and Holmes Beach are the product of a noisy necessity: beach renourishment.

Charlie Hunsicker, director of the Manatee County Parks and Natural Resources Department, said nothing can be done to abate the noise caused by equipment — which he described as akin to the sound of a waterfall — but the benefits outweigh the costs.

“If we forego our beach renourishment programming because it’s too noisy, we’d end up with no beach at all,” he said in an interview Jan. 2 with The Islander.

Beach renourishment is the practice of replacing sand lost through erosion, often by jetting a slushie of oceanwater and sand from an offshore seabed to the beach via a pipeline.

Renourishment is intended to save property and property values from damage caused by erosion.

Hunsicker said the island shoreline suffers from 10-12 feet of erosion every year, which must be countered with renourishment.

Three projects are planned this year to rebuild the beaches from 79th Street in Holmes Beach southward to Longboat Pass.

Hunsicker said the Army Corps of Engineers is taking bids for the first stage of their project, which involves putting a small amount of sand at Coquina Beach in Bradenton Beach, to be funded by the county and the Federal Emergency Management Agency.

Work could begin as early as March, but the timeline is dependent on the Army Corps, according to Hunsicker.

The second project — funded by the county, state and Army Corps — will replenish sand from 79th Street in Holmes Beach to Fifth Street South in Bradenton Beach.

Work will then progress south until reaching Longboat Pass for the third project, which will be funded by the county and state.

More than 700,000 cubic yards of sand for the latter two projects will be excavated and pipelined to the beach from 4,000 feet offshore near Passage Key in the Gulf of Mexico.

The same contractor will be used for both projects to minimize mobilization costs.

Hunsicker said noise from the projects will be the waterfall-like sounds caused by constantly jetting a slushie of oceanwater and sand ashore, as well as mechanical sounds — heavy equipment and operators who move bulldozers to spread sand.

While work is set to stretch across island beaches day and night for months, Hunsicker said any given location along the beach will be within earshot of the projects for only three days — one day as work approaches, another as it reaches the location, and on the third day as it moves south.

“It’s like a slow-moving river of work in front of a property,” Hunsicker said. “It’s a 24/7 operation because it’s near impossible to operate only during the day because the sand has to keep flowing through the pipeline.”

When the projects begin, the county will post a page on its website, mymanatee.org, so people can track where renourishment work is occurring.

While renourishment noise may prove to be an inconvenience for some, local restaurateur Ed Chiles — owner of the Beach House Restaurant, 200 Gulf Drive N., Bradenton Beach — is excited for work to begin.

“It’s music to my ears,” Chiles told The Islander in a Jan. 2 interview. “You’ve got to be willing to take a little bit of inconvenience to have these gorgeous beaches. I don’t think it’s too much to ask. I’d say it’s a pretty great bargain.”

Chiles said he has experienced multiple renourishment projects as the work passes by his island restaurants — including the Sandbar Restaurant in Anna Maria — and they have only negligibly impacted the businesses. He credited Hunsicker for his involvement in leading the county renourishment programs.

“I’ll never forget the first time they rolled by,” Chiles said. “You know the old adage about land and how they aren’t making any more of it? Well, this is where you actually see them making land.”

“It’s like the greatest sandbox you’ve ever seen,” he continued. “And you see people become frozen all the time while watching it because it’s just so interesting to see.”

3 thoughts on “County readies for beach renourishment in 2020”