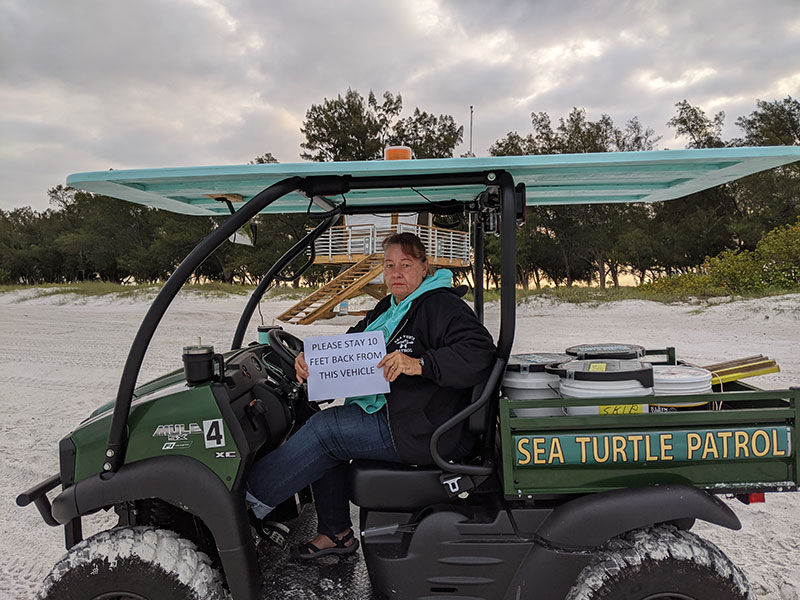 Any day now. Any night.

And, as in years past, code officers in Anna Maria, Bradenton Beach and Holmes Beach are working with Anna Maria Island Turtle Watch and Shorebird Monitoring to ensure the beaches are ready for nesting sea turtles.

For turtle watch and the code departments, duties must be managed within the constraints of social distancing guidelines to prevent the spread of COVID-19.

Season officially starts May 1, and data collection begins for AMITW when the first nest is discovered, but executive director Suzi Fox has been patrolling the beach on an ATV each morning since April 1, looking for signs of activity.

Fox said April 15 that turtle watch made changes in the volunteer team’s activities due to the coronavirus pandemic. She said she plans to limit her crew of volunteers from 67 people walking the beach to eight people on four ATVs looking for nests in the morning. They plan to stake the nests and perform data collection.

In 2019, a record-breaking 535 loggerhead and nine green sea turtle nests were documented on the island. The first loggerhead nest was spotted May 1 at the south end of the Manatee Public Beach in Holmes Beach.

South of AMI on Sanibel Island, the first nest of the 2020 nesting season was laid by a loggerhead April 15.

“The girls are here and they are looking to come in and nest,” Fox said.

She placed signs on turtle watch ATVs the week of April 13 asking people to keep their distance during patrols and suggesting looking for the organization website at islandturtlewatch.com as a resource.

“The safety of the volunteers is the most important thing,” she said. “So the best thing the public can do for us — and themselves — is to stay back when you see us on the beach and go to the website or call with questions.”

The safety of sea turtles is a different matter.

An adult female sea turtle only leaves the water to dig a deep cavity on the beach, where she deposits a clutch of about 100 eggs. Sea turtles use their instincts — honed over more than 100 million years — to follow the light from the reflection of the moon and stars on the surface of the water to return to the Gulf of Mexico.

The same instincts guide hatchlings to the water when they emerge as a “spume” from the clutch to the sandy surface, where they crawl to the Gulf of Mexico.

But either journey — from beach to sea or back again —can be disrupted by lights visible to the sea turtle from the shoreline, or impediments such as beach equipment, tents, canopies, chairs and rafts, left on the shore overnight.

This means lighting visible from the shoreline must be sea turtle-friendly, with Florida Fish and Wildlife Conservation Commission-approved bulbs in low, shielded fixtures. It includes interior lights that must be shaded by blinds, curtains or tinted glass. And the nesting beach must be free of potential barriers to the sea turtles.

During nesting season, which runs through Oct. 31, code compliance in the three cities follow FWC guidelines and enforce state and local ordinances that provide safety for sea turtles and people.

Fox said most beachfront lighting appeared in compliance the week beginning April 13, as code officers in the three cities were off to an early start on lighting inspections.

But that could change when the prohibition is lifted.

“There aren’t so many people out here, but that could shift,” Thomas said April 15. “Right now, everything is a moving target. So we will stay vigilant.”

Robin Evangelisto, Holmes Beach code enforcement officer, said code officers would typically attend an annual training session hosted by the Sea Turtle Conservancy of Gainesville, before nesting season starts. This year, due to concerns over the spread of COVID-19, the in-person training was postponed. As a result, Evangelisto is setting up a training session via Zoom for city staff, using a PowerPoint presentation with conservancy materials.

“Things are up in the air, but we’re still doing what we need to be doing,” Evangelisto said. “We’ve got this.”

Do’s and don’ts for sea turtle nesting season, beginning May 1