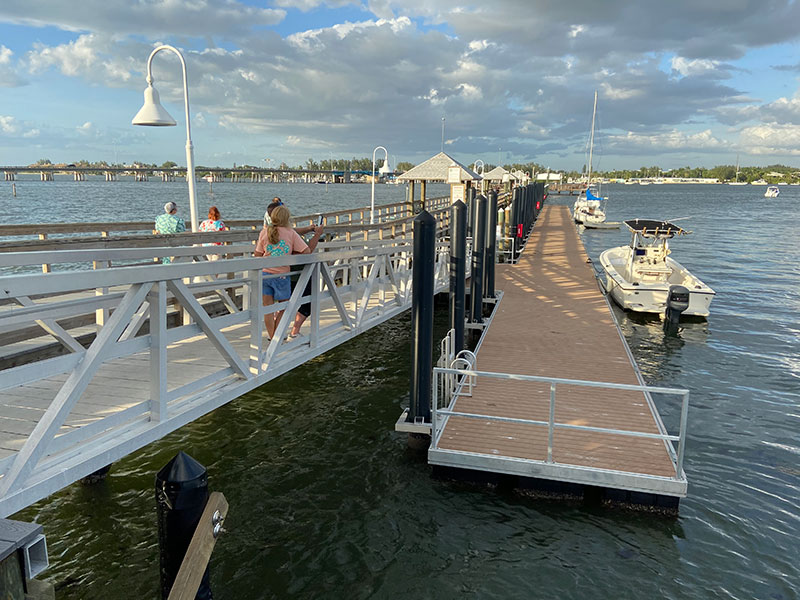 Clouds gather as a couple gazes toward Sarasota Bay May 16 from the gangway of the floating dock at the Historic Bridge Street Pier in Bradenton Beach. The floating dock is awaiting repairs. Islander Photo: Ryan Paice

Sometimes you can’t get what you want.

Bradenton Beach city commissioners voted 4-1 May 7 to approve a Florida Department of Environmental Protection application for a submerged land lease to shift a proposed boatlift from the north side of the Historic Bridge Street Pier to the south side, at the west end of the floating dock.

Commissioner Ralph Cole voted “no” due to his concerns with maintenance issues.

City attorney Ricinda Perry said she was pursuing a submerged land lease from the Florida Department of Environmental Protection for dock accouterments, including a lift for use by the police department and finger docks to supplement the floating dock.

The city and its community redevelopment agency previously agreed to use space on the north side of the pier for the lift, but needed an agreement with the Jackson Partnership, owner of the Pines Trailer Park, adjacent to the pier, to gain riparian rights to the space.

Perry said the partnership offered the rights if the city paid $10,000 for attorney fees it incurred during negotiations, but she said $10,000 was too high of a cost.

Mayor John Chappie said he was disappointed with the tone in an email asking for $10,000 and suggested the city relocate the lift.

Perry said Bradenton Beach Police Lt. John Cosby approved relocating the police boat to the south side of the pier near the west end of the floating dock.

Perry said no part of the police boat would rise higher than the pier railing on the lift, limiting the lift’s visual impact at the pier. She said John Horne, owner of the Anna Maria Oyster Bar on the pier, consented to the location.

Cole said he was disappointed with the relocation because he wanted the floating dock to link with a dinghy dock at the base of the pier to allow his proposal for a nature walk along the shore.

“If it can’t be done, I’m not going to waste my time doing it,” Cole said. “But we need the police boat out there. It’s long overdue.”

Commissioner Jan Vosburgh moved to relocate the proposed boatlift to the south side of the pier. Commissioner Marilyn Maro seconded the motion.

Meanwhile, the CRA addressed the continuing problems with the floating dock.

Hecker Construction, the contractor that installed the dock, made several repairs to prevent further damage but, apparently, more work is needed to meet the designer’s specifications.

Hecker completed repairs for one section but still must replace bolts and secure connections for the remainder of the dock.

“If it was put together the way it was supposed to be, we wouldn’t be having this conversation right now,” Cole said.

Cole said he had scheduled a meeting with Foster Engineering, subcontracted by Hecker for engineering work during installation, to discuss the CRA’s concerns with the dock, including the missing bolts.

The CRA has discussed hiring Foster to complete an as-built final inspection for the dock after repairs.