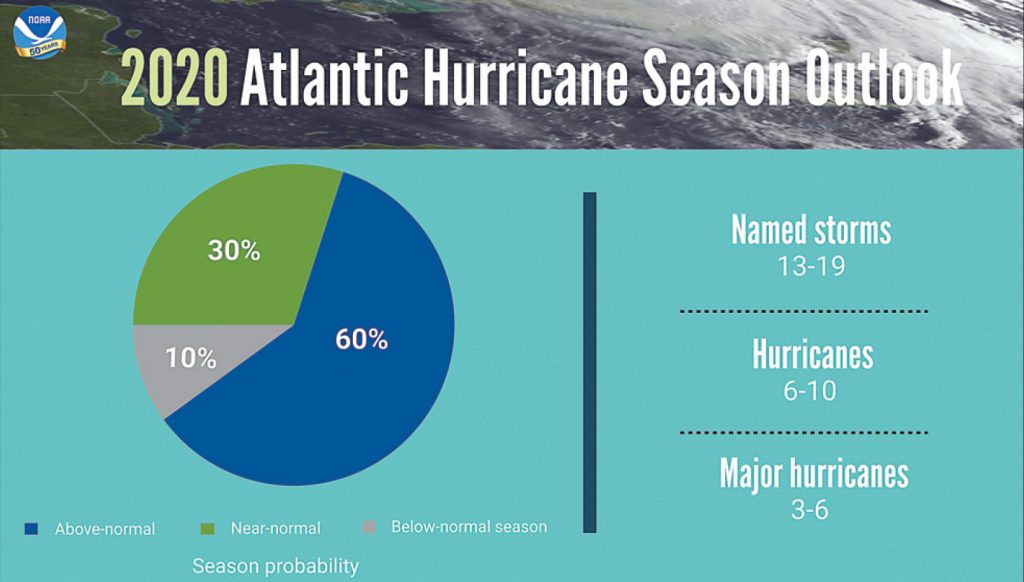 A federal forecast calls for an “above-normal” hurricane season and comes with a reminder that it only takes one storm to cause catastrophic damage.

“As Americans focus their attention on a safe and healthy reopening of our country, it remains critically important that we also remember to make the necessary preparations for the upcoming hurricane season,” Secretary of Commerce Wilbur Ross said May 21, during a media call to review the forecast.

As The Islander went to press May 25, local, state and federal emergency management teams were working on plans to deal with a hurricane during the COVID-19 crisis.

“Social distancing and other CDC guidance to keep you safe from COVID-19 may impact the disaster preparedness plan you had in place, including what is in your go-kit, evacuation routes, shelters and more,” he added.

FEMA was coordinating with the state emergency management team on how to handle evacuations and sheltering during a storm. Options might include ordering some people to shelter at home, creating shelters for people who test positive for the novel coronavirus and opening hotels as shelters.

“This year, more than ever, we’re really stressing that people should know the strength of their homes and whether they can withstand an intense storm,” Litschauer said in a news release. “If people live in older homes or mobile homes, they most definitely need to know where they’ll go if a storm is approaching. People need to evacuate tens of miles from home, not hundreds from home, as we saw in Hurricane Irma.”

If severe weather approaches, county officials plan to hold video news conferences and, if the emergency operations center is activated, the county also will operate a media hotline for updates.

Others with questions or concerns about severe weather can contact the county’s 311 call center.