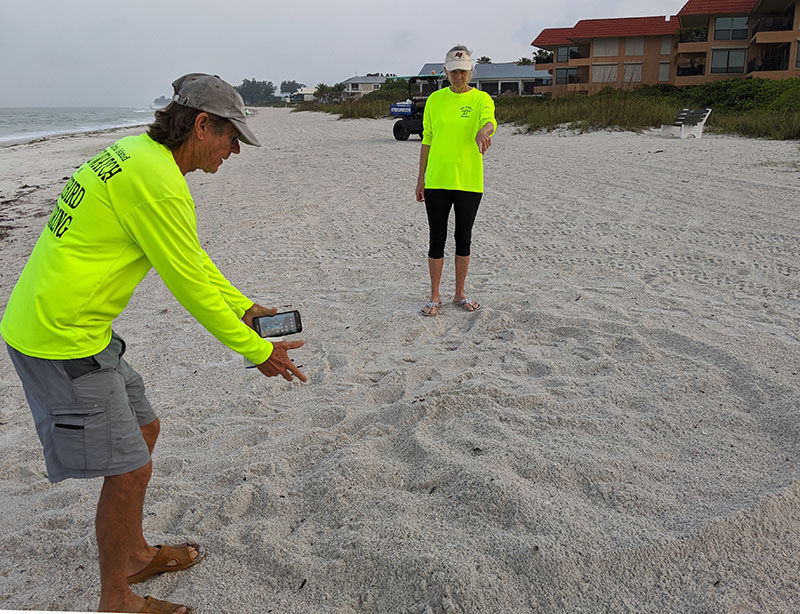 The sea turtles that nest on Anna Maria Island are taking their time.

Fox said there have been 14 loggerhead nests spotted on island beaches since a turtle watch volunteer discovered the first nest of the season April 24 — about a week before the official start of the season May 1.

Fox said an influx of nesting occurred May 10-11, then slowed down.

“But the turtles that nested are probably going to come back and nest again in a couple weeks, so we will see another surge,” she added.

Mature female sea turtles can nest 3-6 times — usually about two weeks apart and on the same beach — in a season, according to data from the Sea Turtle Conservancy.

Due to a planned Manatee County beach renourishment project that could overlap with nesting or hatching, turtle watch volunteers must remove and relocate the eggs laid within the project zone to hand-dug nests outside the renourishment zone.

The plans call for pumping sand ashore from 78th Street in Holmes Beach south to Longboat Pass. Nests laid within that stretch of beach are being relocated to beaches north of Peppertree Lane in Anna Maria so as not to be inundated by sand from the project.

To accomplish the relocation, Fox and about 15 volunteers patrol the beach by ATV just after sunrise to spot tracks leading to nests laid overnight. AMITW volunteers photograph the original nest and collect data, including GPS data.

Next comes the delicate process of relocation.

According to AMITW’s permit with the Florida Fish and Wildlife Conservation Commission, turtle watch volunteers must relocate eggs into a new nest by 9 a.m. the morning the original nest was found.

Each nest contains about 100 eggs, each roughly the size of a pingpong ball.

“You can’t just pull them out in handfuls and give them a toss,” Fox said. “You have to try to keep them in the same position you pulled them out.”

She said within 12 hours of being deposited into the sand by a mature female sea turtle, the embryo of an egg adheres to the inside of the shell. Jostling the fluid within could drown the embryo.

She said one volunteer pulls the eggs out of the nest, keeping them in the same direction in which they were laid, while another carefully places them in a bucket, also facing the same way.

For loggerheads, volunteers must dig a 24-inch-deep cavity for the new nest. For green sea turtles, a larger species that nests less frequently on the island, the holes must be 36 inches deep. Fox said a replacement nest should match the shape and size of the original nest.

She said the FWC tracks information provided by turtle watch and, when nests start hatching in 45-70 days, hatch rates will be considered.

“If only two-thirds of the nests we relocated hatch, we will need to work with them and evaluate what happened,” Fox said.

But Fox said she is pleased with how the relocation work thus far has gone.

“We have a lot of work ahead of us,” Fox said. “But we’ve got a really strong team to help pull off another great season.”