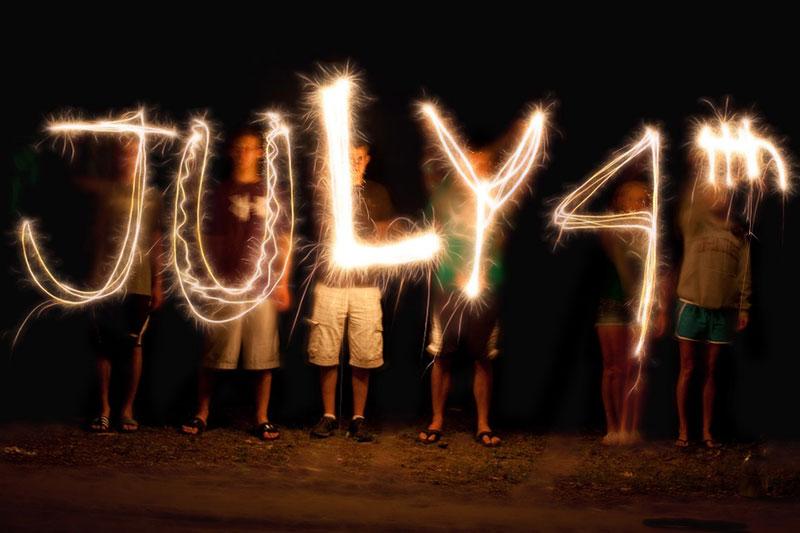 Sparkling 4th Sparklers are allowed but most fireworks are prohibited in Manatee County. A general guideline is if it flies or explodes, it’s illegal. This includes M80s, mortars, bottle rockets and cherry bombs. Islander Courtesy Photo ANNA MARIA ISLAND — Law enforcement will stand vigilant, but this year’s Fourth of July celebration on Anna Maria Island may not have the boom of years past.

West Manatee Fire Rescue fire marshal Rodney Kwiatkowski said June 24 that no individuals or businesses had applied to launch fireworks for the holiday, likely due to the COVID-19 pandemic.

“As of today, there will be no public firework displays come July 4,” Kwiatkowski said.

Traditionally, the Sandbar Restaurant in Anna Maria launches fireworks to celebrate the holiday and, in the past, the Beach House Restaurant in Bradenton Beach sponsored displays on July 3.

Last year, Swordfish Grill in Cortez was ordered to remove fireworks from a garage at a home in the village to safe storage, and eventually applied for a county and WMFR permit, but the fireworks, were shot off from a barge without a U.S. Coast Guard permit.

Kwiatkowski said, “We, the Fire Prevention Bureau, began reaching out to Swordfish management a couple months ago regarding their July 4th intentions. We reminded them then, and at least one more time since, that a permit from USCG Sector St. Petersburg, along with our standard permitting, would be required.”

Kwiatkowski said the district’s firework displays attract tens of thousands of people. During a global pandemic, however, such mass gatherings pose a risk to public safety.

From a consumer perspective, Florida allows the use of fireworks on New Year’s Eve, New Year’s Day and Independence Day. However, Manatee County prohibits the use of projectile and/or explosive fireworks outside of licensed, permitted displays.

“A sparkler is really the extent of what’s legal as a consumer-grade firework,” Kwiatkowski said.

However, he added that WMFR doesn’t have a plan for enforcing the use of illegal fireworks unless it results in a fire or injury.

Cracking down on the use of illegal fireworks, such as firecrackers or cherry bombs, will fall primarily to local law enforcement.

Bradenton Beach Police Chief Sam Speciale said June 24 the police didn’t have a specific plan for enforcing the rules and instead would handle reports of illegal fireworks on a case-by-case basis.

Speciale said if police find fireworks “are big enough to be a safety concern,” they will be confiscated and potentially destroyed. However, he said officers would issue verbal warnings in most cases.

The BBPD will have to handle the holiday weekend an officer down after Jason Cohen resigned June 2 to take a job in his hometown.

The BBPD has singled out a potential candidate to fill the position, according to Speciale.

However, city commissioners agreed to delay the hire until the county responds to its offer for a new interlocal agreement.

The county pays the city around $90,000 a year for BBPD patrols at Coquina and Cortez beaches, which the county owns and maintains.

However, the city hasn’t received an increase for the services for years.

In an attempt to secure a pay raise, the city proposed a new interlocal agreement earlier this year in which the county would pay around $120,000 for BBPD patrols at the public beaches.

Lacking a response, commissioners chose to hold off hiring a new officer until a deal is struck or abandoned.

Speciale said he is confident the BBPD could uphold the law over the holiday weekend regardless of Cohen’s absence.

Holmes Beach Police Chief Bill Tokajer said June 24 his department would enforce the county’s firework regulations on a case-by-case basis. He said illegal fireworks would be confiscated and those using them may be subject to criminal charges, “depending on what they have in their possession.”

“We also will do the best we can to make sure everyone social distances,” Tokajer said. “We will have people monitoring and enforcing the laws on the beach, including zero tolerance for alcohol on the beach.”

The Holmes Beach Police Department’s efforts will be supported by a small force of county code enforcement officers, according to Tokajer.

“I’m confident going into the holiday weekend,” Tokajer said. “And we hope that everyone that comes up is respectful and responsible.”