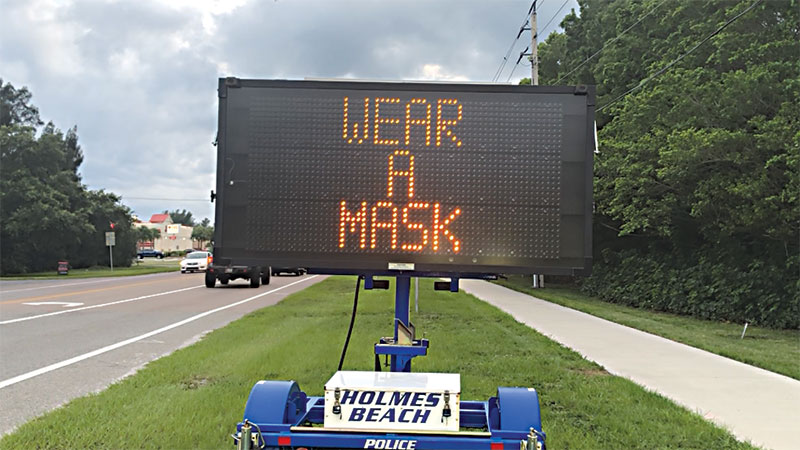 A sign at the Manatee Avenue West entrance to the city of Holmes Beach asks people to “wear a mask” when social distancing is not possible. Islander Photo: ChrisAnn Allen 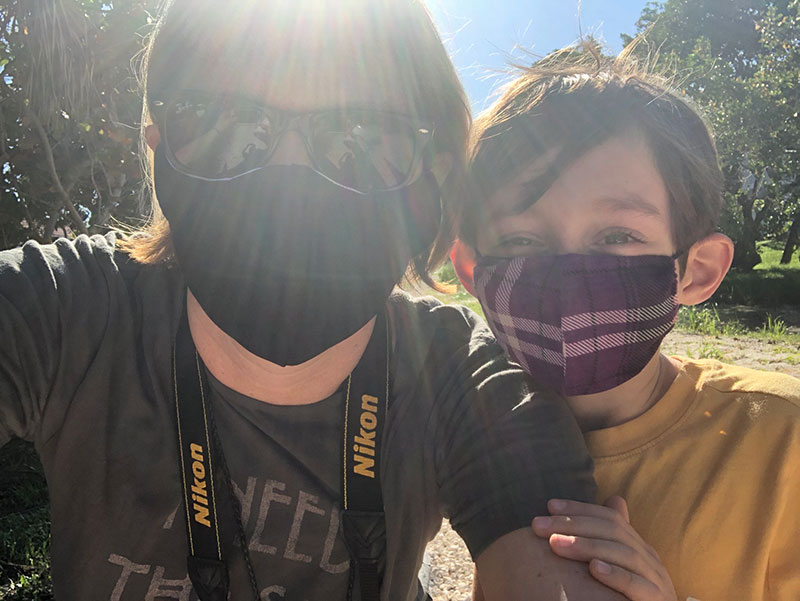 Islander reporter/photographer ChrisAnn Allen and son Aiden Esformes don masks for an outing at the beach in Holmes Beach.

And more people wearing protective face masks could be the answer.

As of May 29, two people on the island were known to have tested positive — one in Bradenton Beach and in Holmes Beach — but well past the quarantine period.

With more testing, the percentage of positive numbers in the county continued to drop May 29, when there were 1,000 positive residents and seven nonresidents in Manatee County, according to the Florida Department of Health.

“Nonresidents” are people who test positive in Florida but reside in another state.

According to the U.S. Centers for Disease Control and Prevention, wearing a face covering is one of the best ways people can prevent the spread.

“CDC recommends wearing cloth face coverings in public settings where other social distancing measures are difficult to maintain, such as grocery stores, pharmacies and gas stations,” the agency website states.

At a May 26 teleconferenced Holmes Beach City Commission meeting, Chair Jim Kihm proposed the mayor issue a citywide mandate on face coverings in public, with some exceptions.

But Mayor Judy Titsworth, lacking consensus from the commission, took no action.

Kihm said while on a recent shopping trip to Publix in Holmes Beach, he counted three of about 40 customers wearing masks.

“I was appalled by the number of people not wearing masks and their lack of concern for others,” he said.

Kihm read a portion of The Islander editorial by newspaper publisher/editor Bonner Joy in the May 27 issue of newspaper into the record.

Joy stated concerns about people not wearing masks in public and sightings of license plates in the Publix parking lot from states considered COVID-19 hotspots, where people are prohibited from renting, according to the state’s emergency orders.

Kihm stated the median age of the population of Holmes Beach is over 65 and he listed other Florida counties and cities that have approved a face covering mandate, including Broward, Palm Beach and Miami-Dade counties and the cities of Hollywood, Miramar, Miami, Boca Raton and Delray Beach.

Commissioners and Mayor Judy Titsworth agreed with Kihm that more people should wear masks. Each related their experiences at island businesses where they saw most people — likely visitors, they each said — not wearing face coverings.

However, citing concerns with private property and enforcement, the mayor and commissioners did not support Kihm’s motion.

County commissioners considered a similar mandate on face coverings earlier in May, but decided enforcement would be a challenge.

When emailed by The Islander about the county’s stance on wearing masks in public, Jacob Saur, the county’s public safety director wrote that the county was distributing information to people and businesses encouraging the use of face coverings.

The county is “continuing to put out the message that masks are an effective way to limit the spread of COVID-19 when social distancing cannot be achieved, such as indoors and common areas,” Saur wrote May 27.

He added that face coverings are recommended by the CDC, as well as the DOH.

Kihm has said he will pass along his research on how other cities are promoting masks for the mayor and city attorney to review.