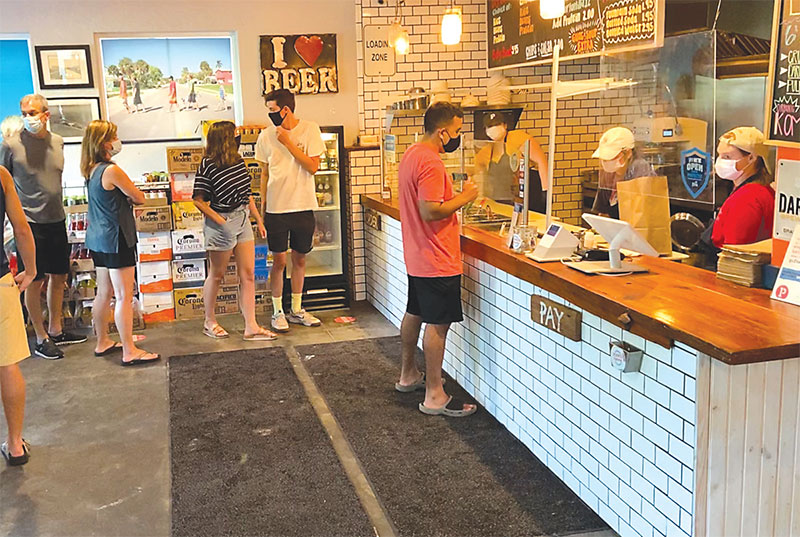 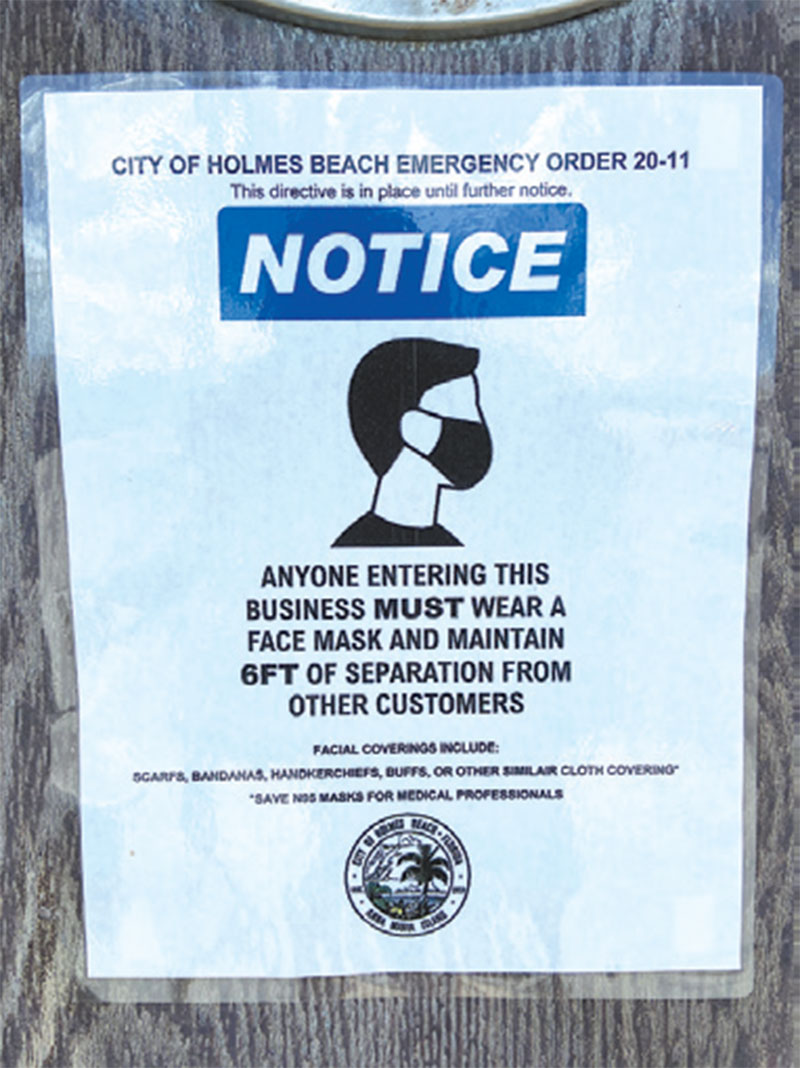 A sign posted outside The Doctor’s Office bar in Holmes Beach informs patrons they must wear masks to enter. However, owner Sean Murphy opted to close the craft cocktail bar and serve its offerings at his restaurant, Eat Here. A city emergency ordinance requires people to wear face coverings inside businesses, as well as outdoors if they can’t maintain social distancing.

BRADENTON BEACH – Face masks may be mandatory for a while in Anna Maria and Holmes Beach.

But Bradenton Beach has not enacted such a policy.

Bradenton Beach city commissioners met June 30 to address extending a declaration of emergency due to the COVID-19 pandemic, when a face mask request came from resident Lynn Selander, who wrote a letter that was read by city clerk Terri Sanclemente during public comment.

“As a very concerned citizen of Bradenton Beach, of a certain age with underlying medical conditions, I am asking that you take decisive action … by requiring face masks to be worn in public,” Selander wrote. “Recommending is not enough.”

Manatee County commissioners, in June, voted to endorse a recommendation from the Florida Surgeon General to wear face coverings. The U.S. Centers for Disease Control and Prevention also recommends masks.

Selander, wrote, “This is a very small thing we can all do that can mean the difference between life and death for ourselves and the vulnerable among us as our infection numbers continue to spike. This is not a political issue. It is a human issue. Please, step up and mandate the wearing of face coverings in public.”

Bradenton Beach commissioners did not address Selander’s request after hearing her letter, but extended the city’s state of emergency for another week.

Selander wasn’t alone in her hopes the city would adopt a face mask policy.

“I wish Bradenton Beach would follow suit,” Tampa-resident Kate Calton commented on a Facebook post about the cities of Anna Maria and Holmes Beach mandating masks. “So many people indoors without masks!”

“I wonder why Bradenton Beach is not requiring masks like the other island cities,” Bradenton resident Linda Larson commented. “It is needed!”

However, Bradenton Beach Commissioner Ralph Cole told The Islander July 3 that the city shouldn’t go “above and beyond” safety recommendations from the state or the county.

“I think people should make their own decision on (wearing face masks),” Cole said. “I believe one of the fundamental freedoms in your life is to decide stuff like that. That’s just the way I was raised.”

Mayor John Chappie and Commissioners Jake Spooner, Marilyn Maro and Jan Vosburgh did not respond to phone calls July 3 from The Islander asking for their opinions on mandatory face masks.

The order, which must be renewed every seven days, requires people to wear face coverings inside businesses except when eating or drinking or working in an office that maintains 6 feet of social distancing between employees.

Anna Maria Mayor Dan Murphy told commissioners code enforcement officers had yet to issue a fine for a violation and that business owners had largely gained compliance from patrons.

Murphy added that he received mostly positive feedback from the public regarding the order, except for one man who claimed the order infringed on his rights.

Initially, instead of leaving the decision to extend the order to Murphy, commissioners had agreed to meet again to discuss potentially requiring people to wear masks in some outdoor situations.

However, Murphy recommended against extending the order outdoors.

“I don’t think we can impinge on someone’s personal rights that much as a government,” he said. “And I know we can’t enforce it.”

Commissioner Mark Short expressed concern with people gathering in queues and disregarding social distancing while waiting to enter a business. He suggested adding a recommendation to the order that people wear masks when in such situations.

They also agreed to create educational signage to provide to local businesses, as well as request vacation rental owners and management to educate their guests about the city’s order upon checking in.

The commission reached a consensus to extend the order for seven days with the suggested changes.

“The community is so supportive of this directive,” Titsworth said July 2.

The ordinance established a $250 fine for a first violation and a $500 fine for subsequent violations, but the city had issued no fines as of July 2.

“We haven’t had any violations,” Tokajer said. “And we haven’t had a lot of (verbal warnings) because it’s on the business owners to make contact with the people themselves, and they only call us if the people are noncompliant.”

“It has not been a struggle (to enforce the policy),” the chief continued.

Sean Murphy, the owner of a bar and two restaurants in Holmes Beach, expressed satisfaction with the city’s face mask policy.

“We had a relatively stable environment, where the residents of the island were being careful and wearing masks,” said Sean Murphy. “But recently we’ve had nonresidents flooding our businesses and streets, and they aren’t wearing masks and they’re bringing COVID with them.”

“The city has done a good job in requiring masks,” he continued. “Let’s hope the citizens have the good sense to follow up.”