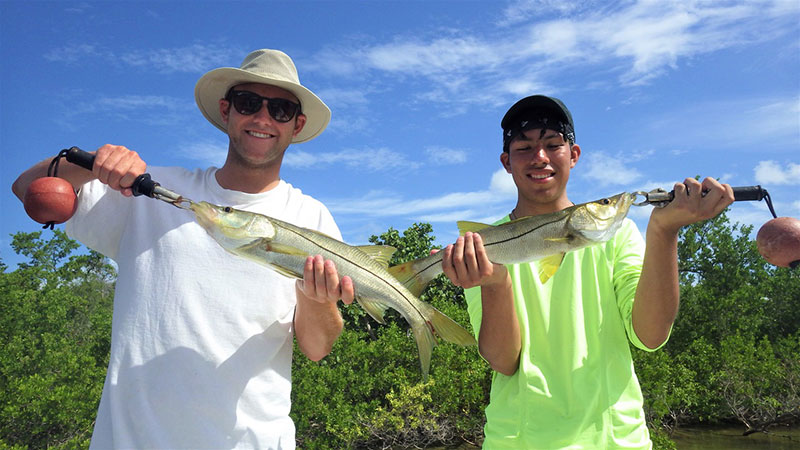 Fishing around Anna Maria Island is producing a “delicious” outcome.

With the arrival of the hatch bait, mangrove snapper are moving into local waters in respectable numbers. Any area where structure exists — a pier, bridges, sea wall, wreck, reef or rockpile — these fish will be congregating. I’m even seeing them on some of the deeper grass flats, where there are traces of rubble or debris on the bottom.

And they come out delicious almost any way you cook them.

Another follower of the hatch bait is Spanish mackerel, which also have shown up in good numbers. Fishing in Tampa Bay over structure, especially around the Sunshine Skyway Bridge, is resulting in as many macks as a person can catch. In shallower water, where grass flats meet with mangrove shorelines, oyster bars or the mouth of a creek, catch-and-release snook fishing is quite good — especially during the early morning when the water is slightly cooler from the night before. Combine this with a strong moving tide and you have the perfect recipe to hook up with some linesiders.

Once the sun moves higher in the sky and the water temps rise, it’s time to move to some deeper grass flats. In these areas, catch-and-release spotted seatrout can be found lurking in the depths, waiting to ambush unsuspecting bait  — you just need to make sure there is a hook and line connected to the bait.

Mixed in are Spanish mackerel, mangrove snapper, jack crevalle and ladyfish. This action can produce a great experience on light-tackle spinning gear.

Lastly, catch-and-release shark fishing is still going strong. Using fresh-cut pieces of mackerel — make sure it’s legal-sized — is great for bait. Most catches are blacktip sharks, although don’t be surprised if you encounter a big bull or hammerhead.

For my Southernaire charters, I’m dialed in on the mangrove snapper bite in Tampa Bay. Light fluorocarbon leaders and small hooks are resulting in limits of these local favorites. It’s still early in the bite, as most catches are in the 12-inch range, but fish 14-16 inches are being caught.

After targeting the snapper, I’m letting my clients enjoy some Spanish mackerel action. This bite is about as good as it gets. Baits aren’t lasting five seconds before they’re chomped by a hungry mack.

Sportfishing the flats for snook also is worthwhile. On mornings when the tide and water temp are right, I’m seeing some amazing catch-and-release snook action. Free-lined live shiners around mangroves are meeting their destiny in short fashion. Most hookups are 20-30 inches.

Finally, spotted seatrout are rounding out the day for the catch-and-release species at the deeper grass flats. This bite is convenient when the shallow water becomes too hot for the fish. I’m also seeing macks, jack crevalle and mangrove snapper in the deep grass.

Jim Malfese at the Rod & Reel Pier is seeing the arrival of mangrove snapper at Anna Maria Island’s northernmost pier. Pier fishers using live shrimp as bait are being rewarded with limits of these tasty fish. Light leaders and small hooks are in your best interest when targeting a wary snapper. Some 15-pound fluorocarbon and a No. 4 hook is ideal. Others using shrimp are targeting catch-and-release redfish and snook.

Those casting spoons or jigs from the pier are hooking into Spanish mackerel and ladyfish.

Capt. Warren Girle was working inshore this past week, fishing over structure and hardbottom areas, producing mangrove snapper and Spanish mackerel for his anglers. Both are responding well to small live shiners as bait, while jack crevalle and juvenile grouper also are coming to the party.

Capt. Aaron Lowman is finding good action while casting over structure in the Gulf of Mexico and Tampa Bay. Mangrove snapper are the primary catch, but macks also are abundant this time of year. Also taking the hook for Lowman’s anglers are gag grouper, jack crevalle and some Key West grunts.

In shallower water over grass, Lowman’s clients are enjoying some action on catch-and-release spotted seatrout. Free-lining shiners in depths of 3-7 feet is resulting in numerous trout, as well as ladyfish, mackerel and jack crevalle.

Lowman also is finding catch-and-release snook fishing to be reliable along the mangrove shorelines of Tampa Bay. Some mornings are resulting in 20-30 linesider hookups for his charters.

Capt. Jason Stock is fishing slightly closer to shore than normal due to strong winds from the west, but this hasn’t curtailed the action on his boat.

Targeting bonito around nearshore structure is producing great action on light tackle. These miniature tunas can drop a spool of line before the unsuspecting angler has a chance to even crank the handle of the reel.

Also around nearshore structure, Stock is finding a good permit bite and plenty of 3-8 foot sharks.

Capt. David White also is working inshore, hiding from the offshore wind and rough water. Targeting catch-and-release snook along the mangrove shorelines of Tampa Bay is providing some great action for White and his clients. Moving out to deeper water, White is putting clients on plenty of mangrove snapper and Spanish mackerel from the structures — over hard bottom, wrecks and reefs.

Lastly, shark fishing is working well for those anglers seeking a thrill. Blacktip, bull and hammerhead sharks are taking the big bait.