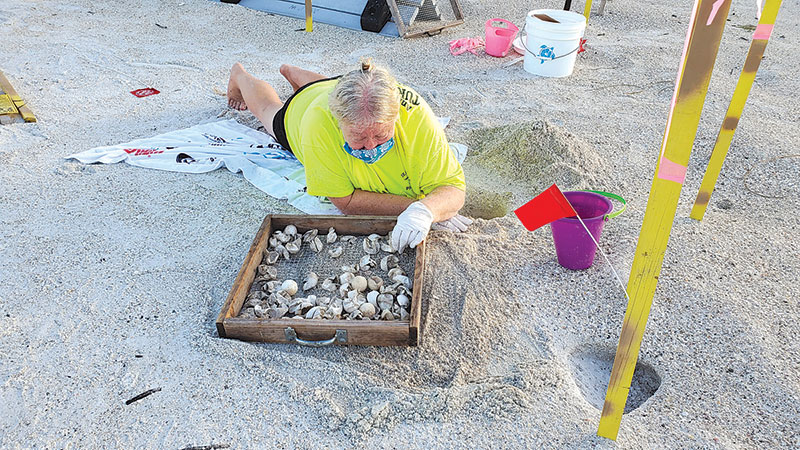 Barbara Riskay, Anna Maria Island Turtle Watch volunteer, counts remains Aug. 29 from a hatched sea turtle nest in the nursery near Peppertree Lane in Anna Maria, where hatching occurs daily. Volunteers wait 72 hours after a hatch and dig into the nest to determine how many eggs hatched, didn’t hatch or if dead or live hatchlings remain. The live hatchlings are released to the Gulf of Mexico and the data is shared with the state and Manatee County. For more, see pages 20, 22. Islander Photo: Courtesy AMITW Tiny tracks in the sand Aug. 29 indicate a sea turtle nest hatched the night before. As of Sept. 2, Anna Maria Island Turtle Watch had reported 349 hatched nests, with about 15,179 hatchlings had made their way to the Gulf of Mexico. Nesting season runs May-October. A depression in the sand Aug. 29 over a sea turtle nest marked by a red flag indicates a recent hatch. Nests often contain about 100 hatchlings, which emerge in unison and scamper across the sand to the Gulf of Mexico, usually at night. Females return to the beach to nest upon reaching maturity in about 35 years. Males do not venture from the water.

AMITW volunteers Linda Oneal, left, Barbara Riskay and Oneal’s sister, Carla Boehme, take a break Aug. 29 from their work with the sea turtle nests in the nursery near Peppertree Lane in Anna Maria. The team is collecting data and tabulating hatch rates from the nests as they perform excavations. Islander Photos: Courtesy AMITW
FacebookTwitterSubscribe
We use cookies to ensure that we give you the best experience on our website. If you continue to use this site we will assume that you are happy with it.Ok