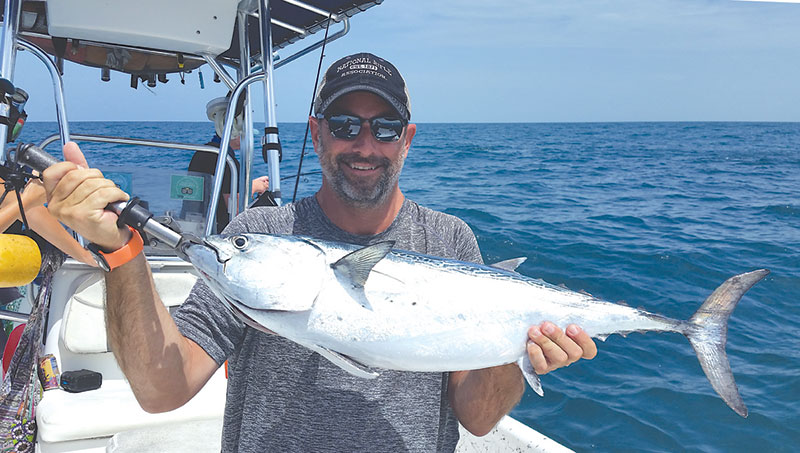 Mike Halkyard shows off one of many hard-fighting bonita caught Sept. 1 a few miles out in the Gulf on a family fishing trip with Capt. Aaron Lowman. Halkyard caught this one on a lure, but plenty of fish took a live shiner. Lowman said he also guided the Halkyard family “to a bunch of catch-and-release snook and seatrout” and some Spanish mackerel and mangrove snapper that went in the cooler for dinner.

If you’re planning a backcountry fishing trip in the waters surrounding Anna Maria Island this month, you’ll want to bring a raincoat.

A pair of slickers might come in handy, too.

With frequent pop-up thunderstorms, you never know when you’re going to get wet. And it seems the storms pop up right when the bite is getting good. Most showers are brief, with some lasting 10-15 minutes. As long as there’s no lightning and your bilge pumps are functioning, you should be good to wait out the storm on the water.

Those willing to wait are being rewarded with a respectable number of catch-and-release snook, redfish and spotted seatrout. Early morning tides seem to work best, especially when fishing the shallow waters around mangroves and oyster bars. Free-lining live shiners and pinfish work well.

For those who like more of a challenge, top-water plugs and soft plastics will attract the fish’s attention. If you’re carrying top-water plugs in your tackle box, don’t hesitate to take a few casts over the deeper grass flats for spotted seatrout. Trout love to blast baits on the surface and, if you’re skilled at “walking the dog,” you might trick one into a taste. There’s other species on the deeper grass flats, too, including ladyfish and jack crevalle — both likely to crash a top-water lure.

Live bait fishing over the deep grass likely will result in a more consistent hook-up-to-cast ratio and, if you’re lucky, you might catch your limit of mangrove snapper between trout bites.

Fishing structure is usually the best plan when searching for snapper, but when they are on the deep grass, they tend to take baits fairly frequently as they are there to feed.

Also, speaking of structure, the snapper are available for the taking in these areas. Mixed in are Spanish mackerel and many jack crevalle. Artificial reefs, wrecks and rock piles should hold the fish until the new moon.

Catch-and-release snook fishing also is quite good. Fishing swift moving tides is key to getting a good bite from a linesider, and I’m also seeing a few redfish mixed in while targeting the snook.

Capt. Warren Girle is finding action for his anglers around the artificial reefs in the Gulf of Mexico. In depths of 30 feet, Girle is chumming with dead shiners, inspiring the mangrove snapper to feed. Free-lining a shiner in the chum results in limits of snappers. Most catches are 15 inches, but snapper up to 20 inches are taking the hook.

Other catches while fishing structure in the Gulf include Spanish mackerel and bonito.

Moving inshore to the shallow grass flats, Girle is putting clients on some catch-and-release action on snook and redfish. Both are responding to free-lined live shiners cast over shallow grass flats — anywhere mangroves and oyster bars exist.

Jim Malfese at the Rod & Reel Pier says catch-and-release snook are being hooked daily by anglers visiting the pier. Pier fishers using live shrimp or other live bait — pinfish and shiners — are hooking into snook 20-30 inches.

Catch-and-release redfish are being caught similarly, although less frequently than the linesiders.

For anglers looking to bring home dinner, mangrove snapper and flounder are on the menu. Limits of keeper snapper — five fish of minimum 10-inches per angler — are attainable.

As for flounder, the pier fishers don’t scoff at fish 18-22 inches. On days when the bait schools are present, casting artificials such as jigs and spoons is attracting an occasional jack crevalle or ladyfish. Lucky anglers are hooking into some Spanish mackerel — nice to add to a snapper limit.

Capt. David White is working offshore with his clients on the red grouper catch. According to White, red grouper are feeding heavily and taking every bait presented to them.

Along with the red grouper, White is finding yellowtail snapper accommodating. Again, every bait is being eaten.

Moving inshore, White is targeting catch-and-release species — snook, redfish and juvenile tarpon. While inshore, White’s clients are hooking into plenty of Spanish mackerel and mangrove snapper for their coolers.