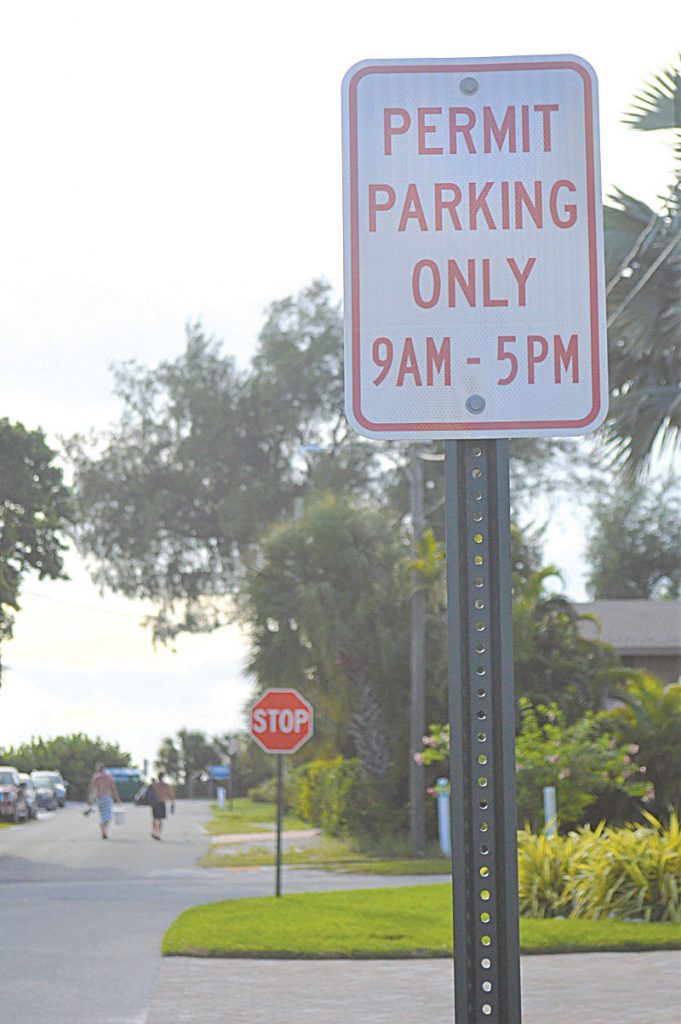 Parking signs posted along some Holmes Beach streets, including the north side of 45th Street, east of Second Avenue, were approved with implementation of a new permit parking system in July. Islander Photo: ChrisAnn Allen

Holmes Beach is ready to embark on a permit parking program.

The city also is considering a rise in parking fines.

At a teleconferenced commission meeting Sept. 22, Police Chief Bill Tokajer updated the mayor and commissioners on the permit program, which offers residents and property owners decals for on-street parking in areas where parking has previously been prohibited.

Tokajer said the permit application is ready and the signs are posted.

Meanwhile, he is working with Citizenserve, the city’s internet documents platform, to get a payment system online by the first week of October.

For $15 per vehicle, residents and owners can obtain decals for parking 9 a.m.-5 p.m. in 619 spots removed from city streets when beach parking reopened following an emergency order for coronavirus closures.

The zone was established for a six-month test period, which starts when the program is fully operational.

In July, commissioners also reached a consensus to increase parking fines from $50 to $75.

Tokajer said Sept. 22, at the commission’s request, he reviewed the cost for parking fines and quantities of tickets in neighboring cities.

“The increase this year was because we closed all parking throughout the city and people were rebelling and they received tickets for that,” Tokajer said, in reference to the closure to on-street parking during the summer when restrictions were tightened to prevent the spread of the novel coronavirus.

In Holmes Beach, a general parking violation incurs a $50 fine, blocking an emergency access leads to a $75 fine and unlawful handicapped or Purple Heart parking triggers a $200 fine.

For general parking fines, Anna Maria charges $50, Bradenton Beach charges $75 and Longboat Key charges $30 but is raising it’s fine to $75 as part of a new ordinance.

Tokajer suggested an ordinance increasing the general fine to $75 and the fine for blocking an emergency access to $100. He also suggested a $200 fraudulent permit fee.

Commissioners reached a consensus on Tokajer’s requests and city attorney Patricia Petruff said she would prepare an ordinance for consideration at the next work session, following the meeting at 6 p.m. Tuesday, Oct. 13, conducted via Zoom. Instructions to join the meeting are provided on the city’s website at holmesbeachfl.org.