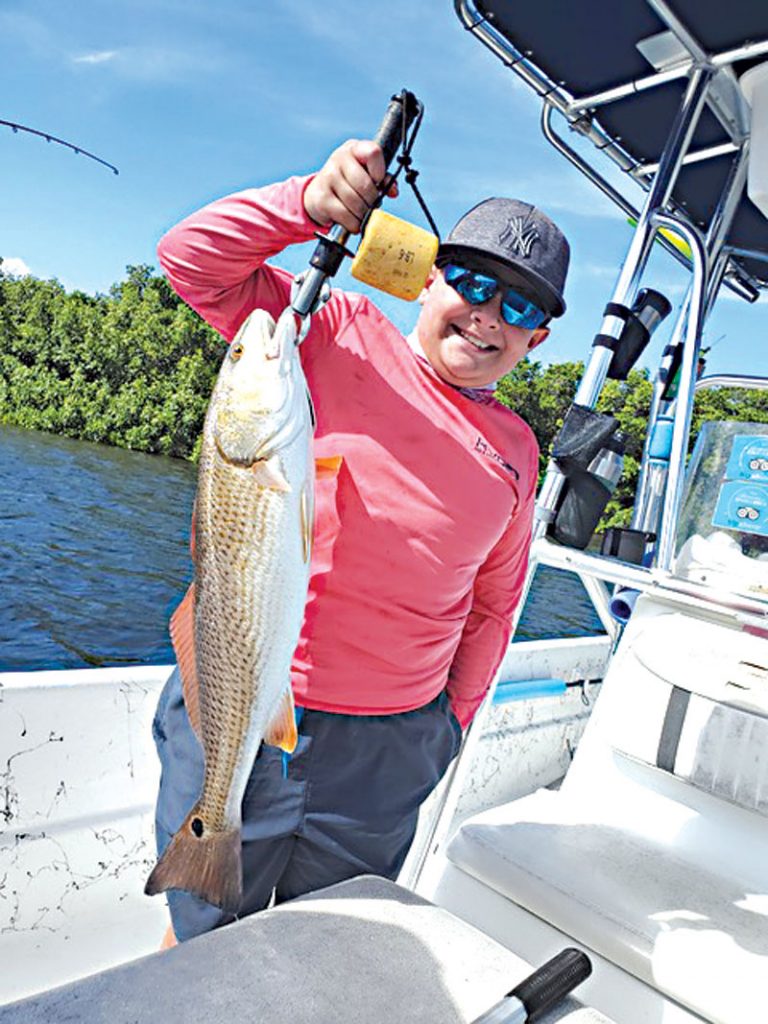 Eddie Valentine, 11, visiting AMI with family from Kentucky, shows of a nice redfish he caught Oct. 28 on a guided fishing trip with Capt. Aaron Lowman. He and his family caught and released a bunch of redfish, snook and seatrout on their charter. 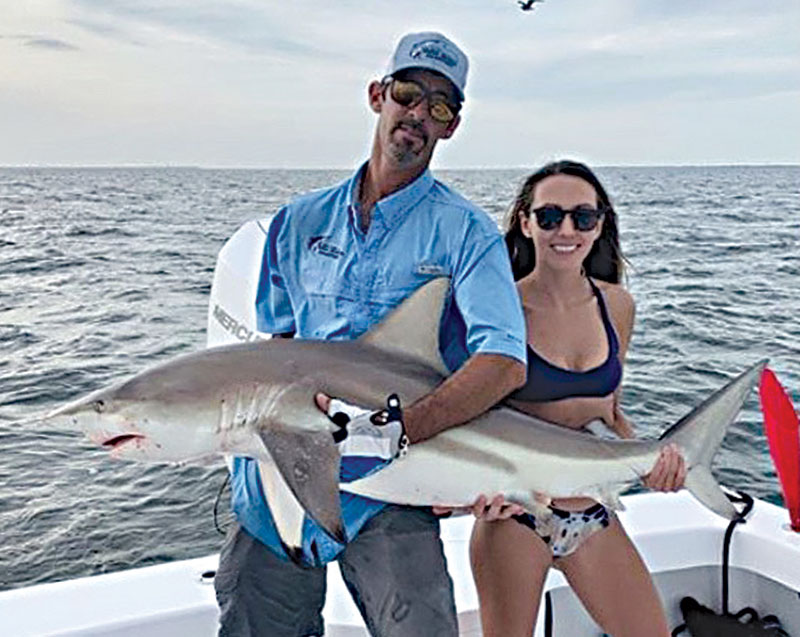 Capt. David White of Anna Maria Charters helps Ashley Ron of Bradenton hoist her Oct. 27 catch, a healthy blacktip shark. It took a cut ladyfish on the hook and was quickly released.

The autumn bite around Anna Maria Island is really starting to settle in.

Fishing along the beaches for migratory fish — mackerel and kingfish — is about as good as it gets. You also can expect to encounter schools of bonito and vast amounts of sharks while fishing this bite.

Live shiners on a longshank hook are working the best for the kings, macks and bonito, although trolling spoons or lipped plugs will work, too — especially for the bigger kingfish. As for the sharks, fresh-cut chunks of bonito or legal-size mackerel are like candy right now.

The fall bite is coming on in the backcountry. Fishing the flats of Tampa Bay is producing plenty of the catch-and-release trio — snook, redfish and trout.

I believe we need a couple of good cold fronts — on order this week — to really get the bite going. You’ll notice more fish in the typical staging spots as the water temps consistently drop a few more degrees.

On my own Southernaire charters, I’m fishing for migratory fish along the beaches and catch-and-release species along the mangrove shorelines of Tampa Bay.

The mackerel bite along the beaches is unbeatable right now — baits are being eaten within seconds of being cast out from the boat.

And. with the kings, bonito and sharks present, the bite is exhilarating.

While working the flats of Tampa Bay, I’m finding good numbers of snook and redfish, with most catches occurring during the higher stages of the tide.

The same applies for the catch-and-release spotted seatrout. Deeper grass flats during high tides are producing the best action on this buck-toothed species.

Capt. Aaron Lowman is targeting migratory fish along the beaches of Anna Maria Island for his clients. Anchoring and chumming in depths of 20-30 feet of water is attracting many species to the boat, including the mackerel family, bonito and sharks.

As chumming increases, so does the action.

Moving inshore to the flats of Tampa Bay, Lowman is putting anglers on a good bite on catch-and-release snook and redfish. Both are taking live baits as they are presented to them. For the reds, casting fresh-cut pieces of ladyfish is working well.

Lastly, spotted seatrout are being found on deep grass flats in Tampa Bay.

Capt. Jason Stock is working up boat limits of amberjack on days when he can get well offshore into the Gulf of Mexico. These aggressive fish are taking live bait offerings and artificials — surface poppers and lipped plugs.

Also. while offshore, Stock is finding large yellowtail snapper and almaco jacks for the coolers.

On windier days, Stock is staying close to the beach to target macks and kingfish. While there, Stock is managing a bite from some late-season tarpon as they migrate south.

Capt. David White said he’s been staying inshore due to strong winds and rough seas in the Gulf of Mexico. Bonito, macks and sharks are the main course for his charter menu, as well as some kingfish.

On the flats, catch-and-release snook and redfish are keeping the action alive as well as many catch-and-release spotted seatrout. Live shiners free-lined on a light leader and small hooks are working well when targeting these inshore species.

Jim Malfese at the Rod & Reel Pier says Spanish mackerel are the highlight this week. Schools of macks are swarming the pier, eating everything in their path. Small jigs and silver spoons are attracting the most action, although live bait — shrimp and shiners — are getting attention.

Large baits such as pinfish or big shrimp are working well when cast under the pier for catch-and-release snook and redfish.