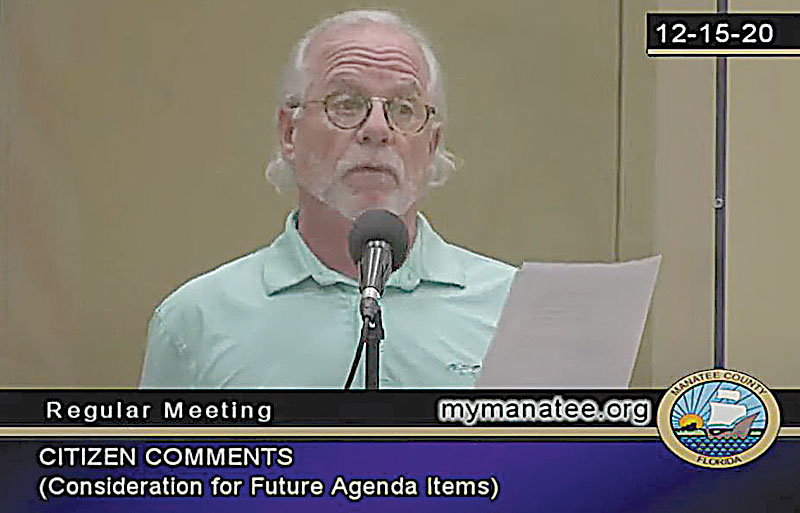 But regulations could change, altering or halting the practice.

Business owner Sherman Baldwin manages the boat tours from an office/bait shop at the Historic Bridge Street Pier, embarking from the floating dock and selling tickets at the bait shop. There is, however, no fueling operation at the pier.

Baldwin told The Islander Dec. 29 that his company has used a loading dock at the Manatee County-owned boat ramp as a site to refuel tour vessels for seven years without issue.

The county began a crackdown to halt the practice in October.

The company purchases market-priced gasoline from land-based gas stations, whereas the fuel cost is $2 more per gallon at a marina, and uses a modified pickup truck to transport and dispense up to 80 gallons of gas into its tour vessels at the public dock.

Baldwin said he spent around $10,000 to ensure the truck’s modifications met federal standards for holding and dispensing fuel.

He added that his refueling operations were inspected by the U.S. Coast Guard and Florida Fish and Wildlife Conservation Commission.

Baldwin said the Manatee County Sheriff’s Office informed him two months earlier that his company could no longer refuel tour boats at the county ramp and that he and his boat captains would be subject to arrest if they did.

In response, Baldwin appeared before county commissioners Dec. 15, asking them to direct staff and the MCSO to stand down and allow Paradise Boat Tours to continue using the dock to refuel.

He told commissioners he’d have to lay off an employee to make up for the additional cost of marina-priced fuel.

County attorney Mickey Palmer said there is no regulation prohibiting people from refueling vessels at the county-owned dock and advised against trespassing someone from public property.

County commissioners unanimously voted Dec. 15 to direct the MCSO to allow people to continue refueling vessels at the boat ramp until the county could hammer out a regulation.

Commissioners also were unanimous in opposition to people using county property to refuel vessels and directed Palmer to draft a prohibition of such activities at the county’s boat ramps.

Commissioners may discuss potential regulations for such activities as early as this month.

Baldwin said he would not favor a prohibition on businesses using the public dock to refuel vessels but would support reasonable regulation.

“I’m in favor of regulating it and making sure people aren’t callous with our beautiful natural resources,” Baldwin said. “But I think it’d be heavy-handed to prohibit it all together.”