A Holmes Beach man, Jack Scott Pritchard, 75, was arrested on a charge of driving under the influence of alcohol for a fourth or subsequent violation.

Pritchard was arrested July 3 for driving a lawnmower under the influence of alcohol in Holmes Beach.

Upon reviewing an HBPD report, the prosecuting attorney updated the charges, resulting in a warrant and Pritchard was again arrested Aug. 1 at his residence by Holmes Beach police officers. He was transported to the Manatee County jail and released the next day on $1,500 bond.

Pritchard’s arraignment had been set for Aug. 4, but was postponed due to the updated charge. A new date had not been released by press time for The Islander.

The Florida Department of Transportation and Manatee County posted the following:

A Bradenton man was arrested July 24 for shooting video of a girl undressing in a beach changing station.

Brandon Bucci, 25, was arrested at the Manatee Public Beach, 4000 Gulf Drive, by a Holmes Beach police officer after witnesses reported the man placed his cellphone on the ground next to a changing station to record a girl as she undressed.

According to the HBPD report, one witness saw the suspect place the phone on the ground and photographed his actions. The witness told the girl’s mother what she had seen and called the police. Both women approached Bucci, who fled into the men’s restroom with his phone.

When the HBPD officer arrived, a crowd had surrounded Bucci, and was threatening him. So the officer took Bucci to the police station, where he was interviewed.

Witness statements were taken and photos of Bucci were provided to the HBPD. Bucci’s phone was seized as evidence.

Bucci was arrested and charged with video voyeurism, which is a third-degree felony.

He was transported to the Manatee County jail and released the next day on a $5,000 bond, with a restriction on the use of photo or video devices.

Bucci’s arraignment was set for Aug. 21.

A man arrested in Holmes Beach as a possible homicide suspect in Alabama was extradited July 14 from Manatee County back to Alabama for further questioning, according to a report by WTVY.com.

A vehicle driven by Robert Dorsey Windham, 31, of Dothan, Alabama, triggered the Holmes Beach license plate reader system May 30, which alerted officers that a homicide suspect was driving a stolen vehicle in the city.

The vehicle was registered to Windham’s aunt, Kay Singleton Branche, who was found dead May 27.

When officers asked Windham for his license, he handed them Branche’s license, as well as his Florida ID card.

The evidence was sent for investigation to the Dothan Police Department.

The vehicle was impounded and held for the DPD.      Windham was arrested and transported to the Manatee County jail, where he remained until he was extradited July 14 to the Houston County Jail in Dothan.

The officer observed a vehicle parked at Coquina Beach after closing hours and the driver was told to leave but, as the man proceeded to depart, the officer ran a search on the vehicle license plate and found an arrest warrant for the registered owner.

The officer conducted a traffic stop and arrested Dominguez for alleged grand theft in Pinellas County. 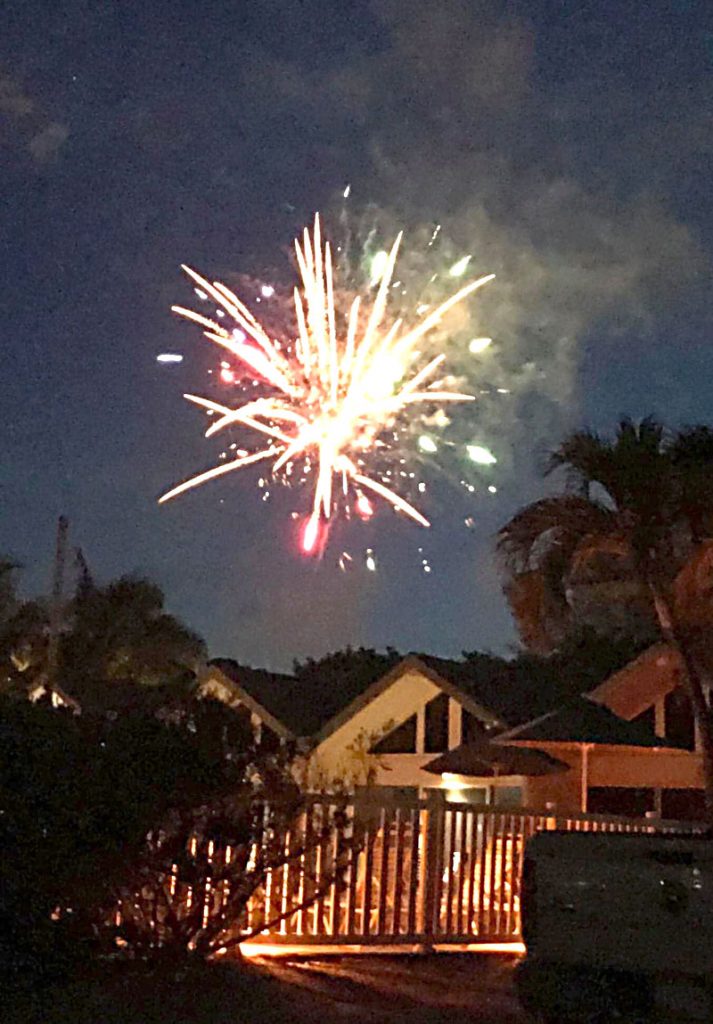 Fireworks explode over the treetops on the beach July 4 near 73rd Street in Holmes Beach. Fireworks could be observed from numerous locations on the beach in the three island cities, although none were permitted. Island law enforcement reported some confiscations, but no arrests for illegal fireworks. Islander Photos: Nenita Daguinotas

July 3 and July 4 were the busiest days of the long weekend, with 29,534 vehicles entering Holmes Beach Friday, July 3, and 28,024 vehicles July 4. About 25,000 vehicles entered the city July 5, when afternoon rainstorms sent some beachgoers home.

Nevertheless, Tokajer said HBPD officers had no issues with the increase in visitors.

“We had a lot of people out on the island, but it was pretty uneventful,” he said. “We didn’t have a lot of concerns or issues.”

HBPD officers had not ticketed anyone for violating the ordinance as of July 10, instead relying on verbal warnings to gain compliance.

There were, however, three DUI arrests.

Officers from the Bradenton Beach Police Department had a similarly hassle-free holiday weekend, according to BBPD Detective Sgt. Lenard Diaz.

“There were people out here, but there were no parking issues or anything like that,” he said July 9. “There were no incidents. It was actually a nice holiday weekend.”

Diaz said one issue the BBPD dealt with was people setting off fireworks from the beach. Manatee County prohibits the unpermitted use of fireworks and people can be fined up to $500 for a single offense.

Diaz said BBPD officers didn’t issue any citations, but they did give verbal warnings to some individuals.

Diaz added that the city was less crowded during the holiday weekend than in past years.

“I don’t know if it was because of the COVID-19 pandemic or if people just knew there wouldn’t be fireworks,” he said. “But it was definitely slower. A lot slower than a normal Fourth of July weekend.”

Anna Maria Mayor Dan Murphy also remarked on the holiday weekend, saying it was slower than the “past five years.”

He said no crimes were reported and no arrests made in the city over the holiday.

However, he noted that “fireworks displays were confiscated on the beaches and elsewhere.”

“Labor Day will present a new set of challenges and we are planning for that now,” he said.

Officers from the Bradenton Beach Police Department noticed Engle’s vehicle cross the median in a roundabout at the west end of Bridge Street, then swerve into the left lane as it continued north on Gulf Drive.

After officers conducted a traffic stop, Engle fell out of her vehicle and began to run, according to a BBPD report.

The MCSO dispatched a traffic officer, who arrested Engle on suspicion of DUI. She was transported to the Manatee County jail and her vehicle was towed from the scene.

Engle was released July 6 after posting a $120 bond.