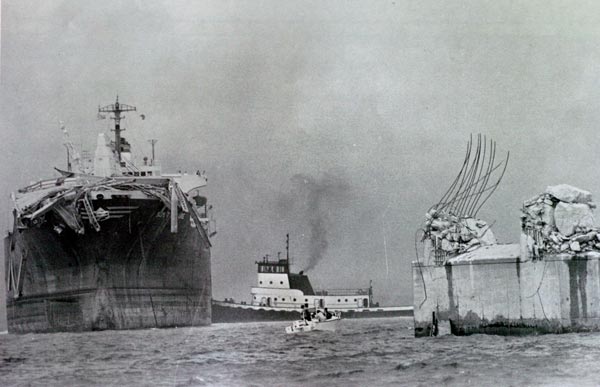 Mayday, mayday The Summit Venture, left, with Skyway roadbed on the bow, and a crushed piling on the right. A small boat in the center assists in the search for survivors, and the tug holds the ship at bay. Islander Photo: Gene Page III 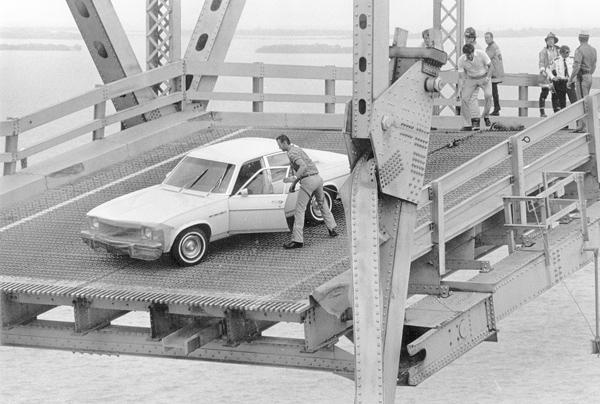 A Florida Highway Patrol officer helps secure the yellow Buick stopped at the edge of the mangled Sunshine Skyway Bridge. Driver Richard Hornbuckle of St. Petersburg stopped just shy of disaster, as he and his three passengers walked away from the car. Islander Photo: Paul Roat 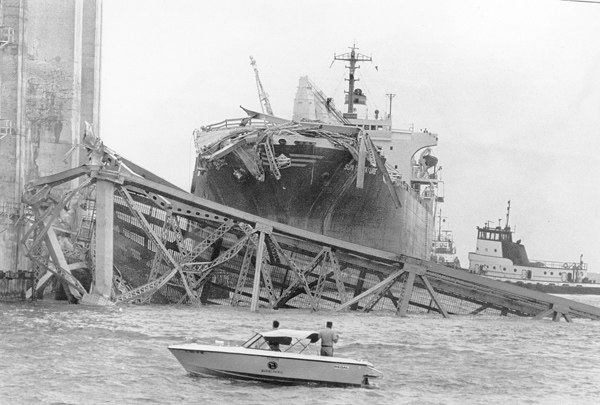 A tugboat pushes the Summit Venture from the wreckage after the crash. Islander Photo: Gene Page III 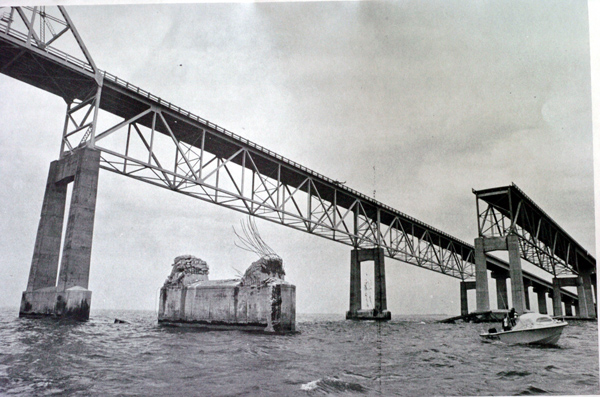 A view from the water of the gap in the southbound Skyway span juxtaposed against the remaining northbound span. Islander Photo: Gene Page III May 9, 1980, dawned but barely on Tampa Bay. A heavy fog dropped visibility to only a few yards, and a fast-moving squall was heading toward the mouth of the bay when harbor pilot Capt. John Lerro and Bruce Atkins, co-pilot trainee, boarded the Summit Venture in the Gulf of Mexico to guide the ship to the Port of Tampa.

The freighter was en route to Tampa to on-load 28,000 tons of phosphate, then on to Asia. It was empty as it passed Egmont Key, its 608-foot-long hull riding high in the water.

Lerro and Atkins boarded the ship at 6:25 a.m. The ship’s master, Capt. Hsuing Chu Lui, relinquished control of the Summit Venture to Lerro, who let Atkins take the helm.

As the twin spans of the Sunshine Skyway Bridge drew near, the squall hit. Visibility dropped, and a trio of lookouts went to the bow to watch for the markers that guide ships through the 800-foot-wide opening of the bridge. Lerro took over from Atkins.

But as the Summit Venture neared a tricky turn in the channel, the storm hit with a vengeance. The empty ship skittered across the water under the force of the wind, estimated at 50 mph. A break in the rain provided one of the most horrible sights a ship captain could imagine — a bridge abutment loomed out of the darkness dead ahead, fully 800 feet from where it was expected to have been.

Lerro ordered the anchor dropped and the engines full astern. It was too little too late, and the 19,734-ton ship hit the southbound span’s bridge piling, crumpling the metal roadbed into the water, at 7:38 a.m.

Car after car after truck after bus drove off the edge of the bridge until one car, creeping through the storm, screeched to a halt only 14 inches from the yawning gap. Its four occupants scrambled for safety and began stopping other vehicles.

Of the eight passenger vehicles and one Greyhound bus that went over the edge, only one person survived the plunge and was pulled to safety aboard the Summit Venture. On board the ship, the lone lookout remained at the bow and survived the bridge span’s collapse by ducking between two huge stanchions. He crawled out from beneath the 90 feet of roadbed that came to rest only inches above his head.

Recovery of the 35 bodies claimed by the ship’s crash took almost a week. The twisted debris required explosives to break, and cranes were needed to lift the vehicles to the surface. The force of the crash ripped open the top of the bus along its length.

Divers recovered many bodies that day and transported them to Mullet Key’s Fort Desoto Park. Others washed ashore days later. Clearing the channel of debris so other ships could pass through the bridge channel took weeks.

The Florida Department of Transportation was taken to task for not providing adequate protection around the bridge pilings that could have halted a ship before it struck the bridge itself. Also, the bridge opening was too narrow for modern ships to safely navigate, critics charged.

Even the channel leading to the Sunshine Skyway Bridge took some heat, as its odd dogleg eastbound was less than a mile from the span. The marker where the turn takes place is only seven boat lengths from the bridge, leaving scant time to make any last-minute course corrections.

The $240 million Sunshine Skyway Bridge of today was finished in 1987. It does have a sturdy fender system around its pilings, a wider opening for ships to pass through, and with the new construction, the channel is aligned to be more ship-friendly.

Much of the old Skyway — the long approaches to the twin spans — was retained as fishing piers, and the central span’s debris used as artificial reefs.

Yet there are few who remember that Mayday and now drive under the bright yellow girders supporting the graceful new Skyway who don’t peer anxiously left and right to see if another squall or a freighter is bearing down on the bridge, and reflect on that early morning years ago.

It’s hard not to remember the past — and the early morning cries on the radio “Skyway disaster, Skyway disaster. Mayday. Mayday at the Skyway Bridge” — when now we traverse the long, rising, majestic span across Tampa Bay.

This story by former Islander editor Paul Roat was published in 2007. Roat, a reporter/photographer at the former Islander newspaper in 1980, was on the Sunshine Skyway Bridge shortly after the Summit Venture crashed into the bridge to record the aftermath of the Skyway disaster.

Thirty-two years ago today, in what many old-time area residents consider the worst accident ever in the Tampa Bay area, the southbound center span of the Sunshine Skyway Bridge collapsed into history after the cargo ship Summit Venture struck a support piling during a storm, knocking a section of the bridge into Tampa Bay.

The chilling mayday call to the U.S. Coast Guard Station in St. Petersburg came at 7:38 a.m. from Summit Venture pilot John Lerro, who said “The Skyway Bridge is down. This is a mayday. Emergency situation. Stop the traffic on the Skyway Bridge.”

For whatever reason — and there are as many theories and reasons as there are conspiracy theories about who shot John F. Kennedy — the ship was not in the middle of the channel at 7:38 a.m. where it should have been on a heading to the Port of Tampa. It was on the north edge of the channel doing 8 mph when it struck the support.

At the helm was John Lerro, a four-year veteran channel pilot who had taken ships of all sizes through the channel, which is considered one of the longest in the world. At his side was pilot-in-training Bruce Atkins.

What happened in the next 60 seconds has been debated 32 years.

A fierce wind suddenly came out of the southwest, bringing a tropical-force squall and driving rain across the ship’s bow, which could not be seen by Lerro from the pilot house.

Vision was down to zero, but Lerro continued his course. He did not slow down. By this time, even if he had seen the bridge support, he likely could not have reversed the ship’s engines or changed course in time to avoid the crash.

Suddenly, Lerro could see part of the bridge directly ahead. It was not the overhead span that would indicate he was on course, but the support. And the Summit Venture was headed directly for the bridge. There were no concrete fenders guarding the support to ward off an 87,000-ton, 608-foot-long freighter.

When the ship hit the bridge, more than 1,000 feet of roadway fell into Tampa Bay, including eight passenger vehicles and a bus with 29 people inside.

One man survived when his pickup, still on the roadbed, landed on the deck of the Summit Venture, then bounced into the water. The driver was able to escape.

No one survived the 250-foot fall to the water.

What is known is that work crews and divers spent weeks looking for bodies in the 200-foot depths of Tampa Bay.

The bridge stayed closed for several days until officials reopened the two-lane northbound span for traffic in both directions. It would stay that way until April 20, 1987, when the present Sunshine Skyway Bridge was opened.

At the time it opened, the Sunshine Skyway was the world’s longest single-support span bridge. It was built for $245 million.

The new bridge has concrete fenders — called dolphins — surrounding each of the six support pilings for the center span.

Eventually, the old spans were torn down and both north and south approaches on the old Skyway Bridge were converted to fishing piers.

In November 2005, the Florida Legislature officially named the bridge linking Manatee and Pinellas counties the Bob Graham Sunshine Skyway Bridge after the governor of Florida and U.S. senator who presided over its design and construction.

Earlier this year, the remaining concrete pilings from the original disaster were removed and hauled to locations in Tampa Bay and sunk to create several artificial reefs. Two reefs are located in Manatee County waters.

On May 9, 2000, Lerro told the St. Petersburg Times in an interview marking the 20th anniversary of the accident that not a day went by when he didn’t think about what happened, the people who died, and what he should have done, or not done.

A few months after the tragedy, Lerro was diagnosed with multiple sclerosis. He was 29 years old. He died in August 2002.