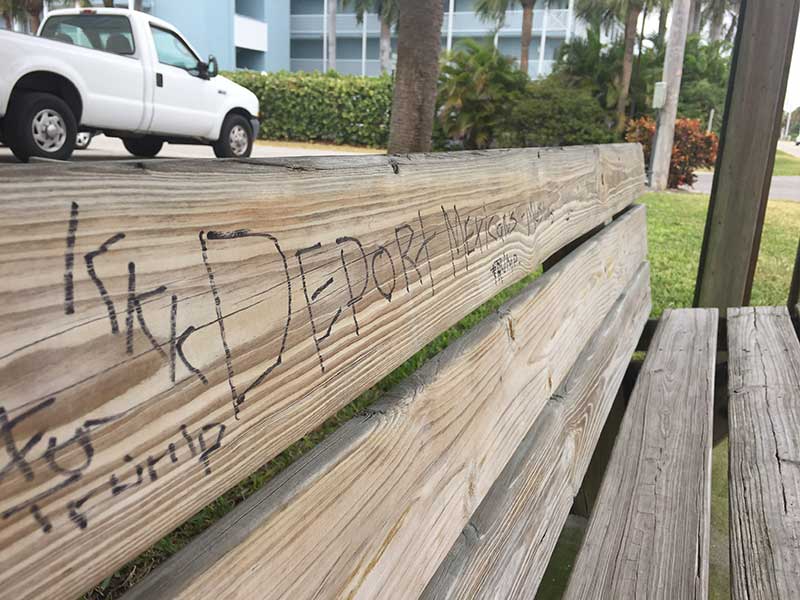 An ugly U.S. election spilled into the streets of Holmes Beach with a flurry of hateful graffiti.

Proclaiming “For KKK and Trump,” the remarks expressed anti-gay sentiment and support for deporting Muslims and Mexicans.

Also hit with graffiti were wooden gates around a dumpster at the Nautilus condominiums, 7100 Gulf Drive, a Sato Real Estate sign in the 7000 block of Gulf Drive and a white fence at a residence in the 200 block of 69th Street, an Island Real Estate rental property.

Hand-drawn heart-symbols around the word, “Trump,” also were observed on a stop sign at the corner of Gulf and 70th Street.

When told of the graffiti, Mayor Bob Johnson said, “I think it’s pretty disgusting personally. But I’m not surprised by much, given the nature of the campaign.”

He called the vandalism “most disappointing” and “unfortunate.”

“It’s not the kind of community we want to live in,” he said and added, “My only hope is that this too shall pass.”

A week after the Nov. 12 reports, HBPD Detective Sgt. Brian Hall said there are no suspects and no other reports of campaign-related graffiti.

“My guess is it was some kids being jerks,” he said, adding the reports mark the first time for graffiti problems in Holmes Beach following an election.

In another report, Ogline identified the suspects as “at least two people, one male and one female, based upon the handwriting style and my experience.”

Public works will be painting over the graffiti on city property, Hall said, adding he believed the Nautilus property already was repainted.

No similar damage was reported in Bradenton Beach or Anna Maria.

Damage to city property was estimated at $100 and for the Nautilus gate, $100. Island Real Estate estimated $20 in damage, and Sato valued its sign at $50.

Hall said anyone with information should contact HBPD at 941-778-COPS or CrimeStoppers at 866-634-TIPS.