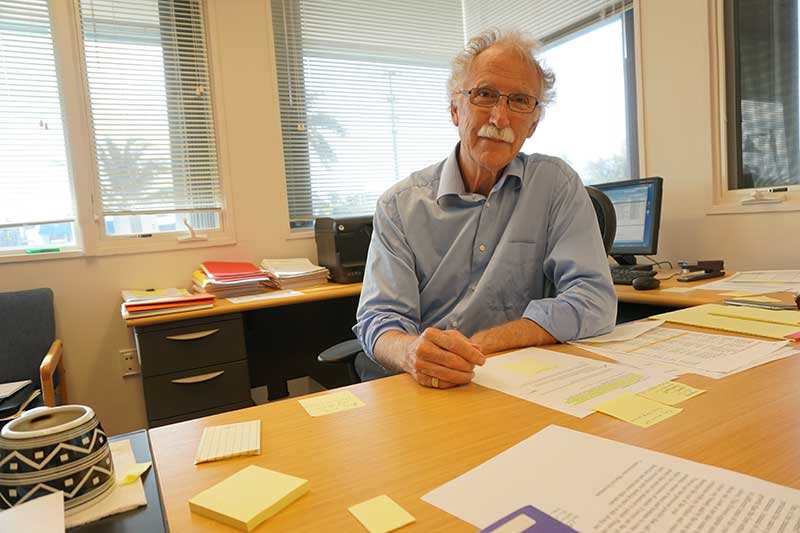 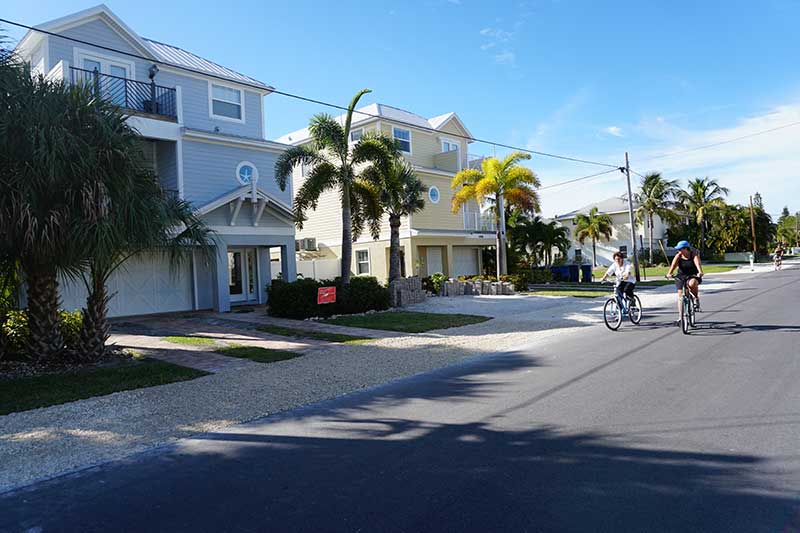 Alice Silke of Holmes Beach and Kim Scharafin of Illinois ride past 6906 Holmes Blvd. The home is the subject of a Bert Harris Jr. claim filed Jan. 12 against Holmes Beach.

Some property owners are hoping to recover losses on their investments from the city.

And the city’s vacation rental ordinance, effective Sept. 8, 2015 — limiting occupancy to two people per bedroom or six occupants per home, whichever is greater — is the overreaching government act alleged by the majority of Holmes Beach claimants.

The restriction is cited by attorney Aaron Thomas of Najmy Thompson P.L. of Bradenton in claims filed in January against the city on behalf of the owners of 6906 Holmes Blvd., 6422 Gulf Drive-Unit 5 and 204 69th St.

Thomas filed a $395,000 claim Jan. 12 for the Ocala owners of the Holmes Boulevard six-bedroom home they claim was built to accommodate 16 people. The owners are DSB RE Holdings LLC.

Thomas filed another Jan. 12 claim at city hall for a $380,000 loss for R. Carlile Roberts, who owns a three-bedroom Gulf Drive rental home. The owner claims the home was built to accommodate eight occupants.

Thomas filed the third claim for $355,000, stamped Jan. 13, on behalf of Tyler and Melissa Prout of Wisconsin, who own a 69th Street five-bedroom condominium they say can hold up to 14 occupants.

The Bert Harris act limits claims to those filed within a year after a government entity first applied a restriction.

The first application, according to state law, can be either by written notice of a statute enactment or a development denial.

Mayor Bob Johnson said Jan. 19 that Holmes Beach sent no notices related to the enactment of the 2015 city ordinance.

As far as the claims awaiting settlement offers, Johnson expects city commissioners to hold a shade meeting and extend offers to some claims in the next 30-60 days.

Offers — which, according to the act, may include a property purchase, allowing a use and even “no changes to the action of the governmental entity” — must be extended by the government entities served with a Bert Harris claims.

The state set a 150-day time frame for the city to make an offer, and, if the matter doesn’t settle, tender a statement of allowable uses. After 150 days, the claimant can seek resolution in the courts.

In Holmes Beach, most claims were filed between March and November 2016.

The complaint states the city burdened the owners’ vested rights to build an eight-bedroom duplex. Instead, a six-bedroom duplex was constructed, with three bedrooms per unit.

The city filed Dec. 19, 2016, to dismiss the Clark complaint, claiming the Clark Drive owners failed to submit a permit to add bedrooms.

Louis Najmy of Najmy Thompson said his firm will respond to the city’s motion for dismissal.

The Key Royale Drive case went to trial Dec.12-16, and 12th Circuit Judge Gilbert A. Smith Jr.’s decision is expected in about a month. If the judge finds Holmes Beach liable, a jury will be selected to determine damages.

The city is represented by Trask Daigneault LLP of Clearwater, attorneys provided by its insurer, Florida Municipal Insurance Trust, which contended the owners went beyond the scope of their permit.

In other Bert Harris claims against the city, owners allege city restrictions, including a reduction in living-area ratio, a front-yard pool ban and limits on pool size, have reduced value or burdened their properties.

What’s behind the name?

Bert J. Harris Jr. is a name heard more and more on Anna Maria Island, in conversations on the streets and at city halls, as well as in county courtrooms, as more than 100 claims have hit Anna Maria and Holmes Beach.

A champion of private property rights and the agricultural and cattle industries, Bert J. Harris Jr. was a state representative for the 77th district 1982-96.

In signing the law, Chiles was partly inspired by the “regulatory gauntlet” and $50,000 increase in costs, he endured to build “a cook shack” on his north Florida property, according to a June 2011 Stetson Law Review article by Frederick Reeves, George Reeves and George Zadorozny.

Harris was a World War II veteran and served in the U.S. Army Air Corps and the Pacific Theater, state government records show.

Now 92, Harris is a citrus farmer in Lake Placid, according to Wikipedia. — Kathy Prucnell

Another lawsuit, filed Nov. 8, 2016, by the owners of 306 Clark Drive, is in a preliminary stage. The claim alleges the city burdened the property by a building moratorium and a Sept. 8, 2015, rental ordinance that limited a duplex to two-bedrooms per unit.

City settlement offers before the lawsuits were filed — and for claims made for 7003 Holmes Blvd. and 128 49th St. — failed to resolve the matters.

Keith Carter, owner of 128th 49th St., wrote in a Jan. 19 email about the city’s position, saying it contends “changes to the city’s building code are not grounds for a Bert Harris claim.”

“If the city decides not to enter into settlement discussions, the next logical step for people filing Bert Harris claims is to coalesce around one case that will be litigated as a test case,” he added.