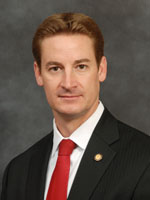 W. Gregory “Greg” Steube is a Republican member of the Florida Senate for the 23rd district, encompassing Sarasota County and western Charlotte County, since 2016. He termed out after three terms in the Florida House of Representatives, 73rd district, serving the Sarasota-Manatee area 2010-16.

Regulations curtailing the effects of short-term rentals on long-term residents are at risk.

Sen. Greg Steube, R-Sarasota, filed a bill Dec. 16, 2016, that would prevent local governments from enacting new regulations specific to vacation rentals and would roll back vacation rental ordinances adopted after 2011.

“I don’t think it’s appropriate to treat one owner differently from another because of the way he’s handling his property,” Steube said Jan. 19. “That’s not the way our state should be operating.”

In April 2016, Anna Maria enacted a vacation-rental ordinance that spurred demands for compensation or restored rights, mostly due to the government limits on occupancy.

In response to a question regarding the diminishing resident population on Anna Maria Island due to the proliferation of short-term rentals in residential neighborhoods, Steube said, “The cities can continue to adopt ridiculously inordinate ordinances that burden private property owners, but they’ve got to do what is uniform across the board,” Steube said.

However, Steube also said, “They can make their noise and occupancy ordinances, but I don’t see how they can police these things,” referring to the island municipalities. “The government should not be that intrusive in people’s lives.”

“I’m just trying to make a uniform policy across the state to give people their constitutional property rights,” Steube said. “You can’t force people to live in their homes.”

Bradenton Beach Commissioner Ralph Cole said he views short-term rentals as commercial activity, which municipalities should be able to regulate.

“I think that when you do transient rentals, it becomes a commercial operation,” Cole said. “If you are requiring people who own short-term rentals to have a state business license, what’s the difference between that and operating a motel or bar, which are both commercial?”

Bradenton Beach officials are considering a measure similar to VROs in Anna Maria and Holmes Beach. The transient public lodging establishment ordinance would allow “transient use of residential property” upon issuance of a license from the Florida Department of Business and Professional Regulation along with a city business tax receipt and a yet-to-be-enacted TPLE license.

“I want Steube to tell me that this is not a commercial use,” Cole said. “I disagree.”

“People move into certain areas, be it a homeowner’s association, an unincorporated city or a municipality, because of the way that community operates, with the ability to make rules and regulations as an agency,” Chappie said Jan. 19. “We need to protect everyone’s rights — not just individuals looking for an investment.”