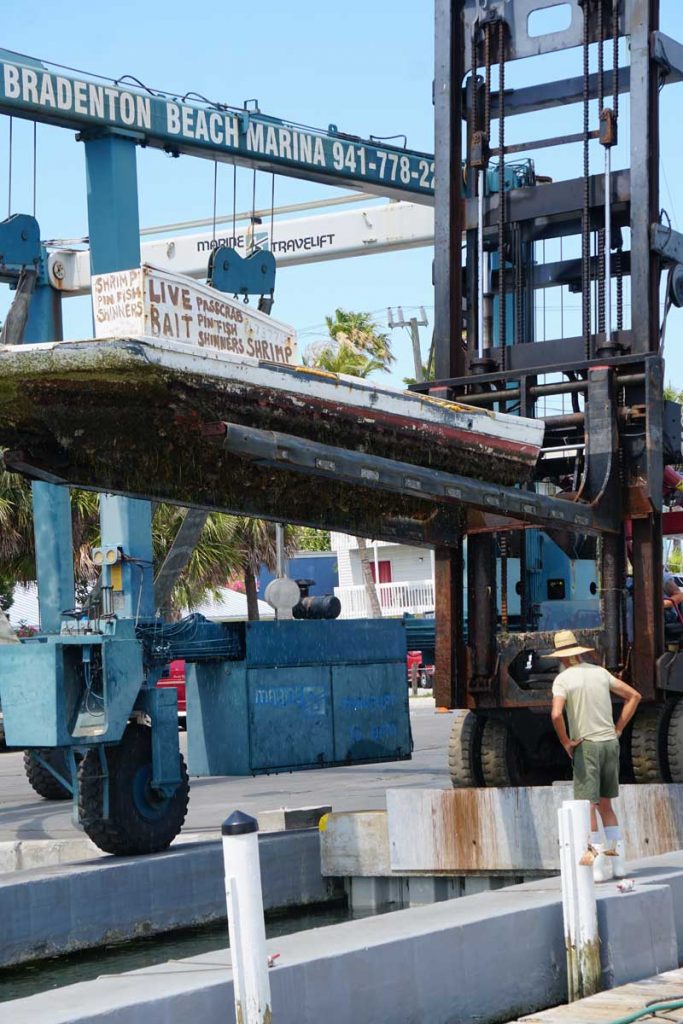 John Maguire III studies his 20-foot vessel lifted May 17 from Sarasota Bay and destined for the junkyard as a result of a 12th Circuit Court derelict vessel case. Islander Photos: Kathy Prucnell 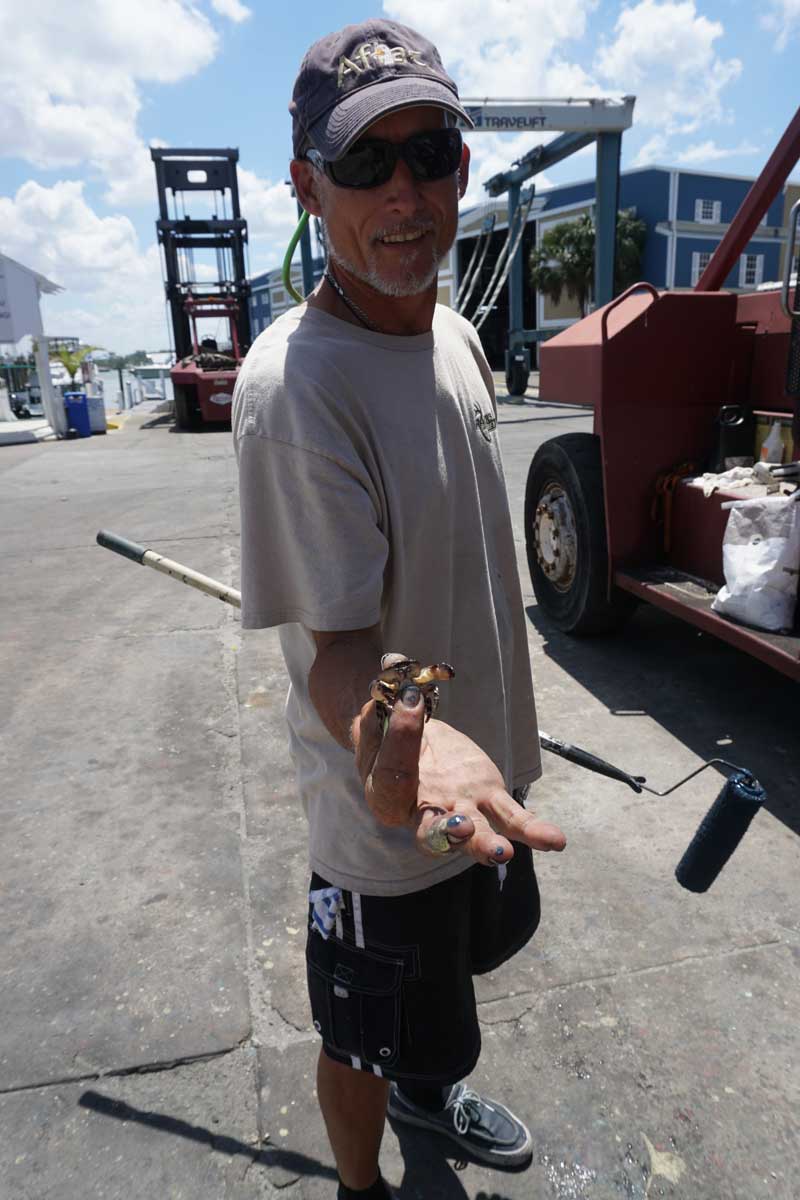 Back to the bay James Suggs, a Bradenton Beach Marina dock worker, shows a juvenile stone crab he pulled off the bottom of a vessel before hustling the crab into the water. Islander Photo: Kathy Prucnell

John Maguire III answers the phone “baitman” and speaks what’s on his mind — no filter.

He’s had plenty to speak about in the past year, including 17 boating violations, beating a charge for peeing off a dock and dealing with a citation for a partially submerged derelict vessel — a 19-foot Godfrey skiff that — before a court-ordered removal May 17 — often was tethered to his liveaboard sailboat in the waters south of the Cortez Bridge near Cortez.

After a May 15 court hearing, Maguire reports the derelict vessel case is settling.

Maguire runs his boat-based bait store between Cortez and Bradenton Beach and the 19-foot skiff was where he stored his inventory of shiners and shrimp. Before April 2016, Maguire ran his business from the skiff at the Historic Bridge Street Pier at the behest of Bradenton Beach City Commission.

Represented by a public defender, Maguire has been told his case will be dismissed at a May 30 pretrial conference if he provides proof he satisfied a plea deal to remove and junk the skiff.

Chris “Nelly” Nelson of Cracker Seafood & Bait helped Maguire tow the skiff  May 17 to the Bradenton Beach Marina, where it was hoisted to land.

There, the vessel awaited “Scrapper Frank,” Maguire said, who told him he’d scrap it for $100.

The derelict vessel case stems from a citation in April 2016 for failing to remove the skiff — a tagged “partially submerged vessel” that took on water with holes in its hull and cap — issued by Manatee County Sheriff’s Deputy Daniel Hearn while on water patrol.

Even though the plea won’t exonerate him, Maguire feels vindicated because it doesn’t include jail, probation and fines.

And he’s adamant he’s been harassed.

“My boat does not take on water,” Maguire says. “Except when it rains. They should’ve dropped the charges a lot sooner.”

Maguire says restaurant owners, who don’t want him near their docks, complain to Hearn.

Maguire sold bait off the Bridge Street pier until the Florida Department of Environmental Protection advised the city the submerged lands lease prohibited commercial use of the pier.

Bradenton Beach police arrested Maguire for allegedly urinating off the pier in April 2016.

A trespass warning issued as a result of that incident was pardoned by the city in November 2016, after the urination charge was dropped.

His pretrial conference on the derelict vessel charge is set for 1:30 p.m. at the Manatee County Judicial Center, 1051 Manatee Ave. W., Bradenton.