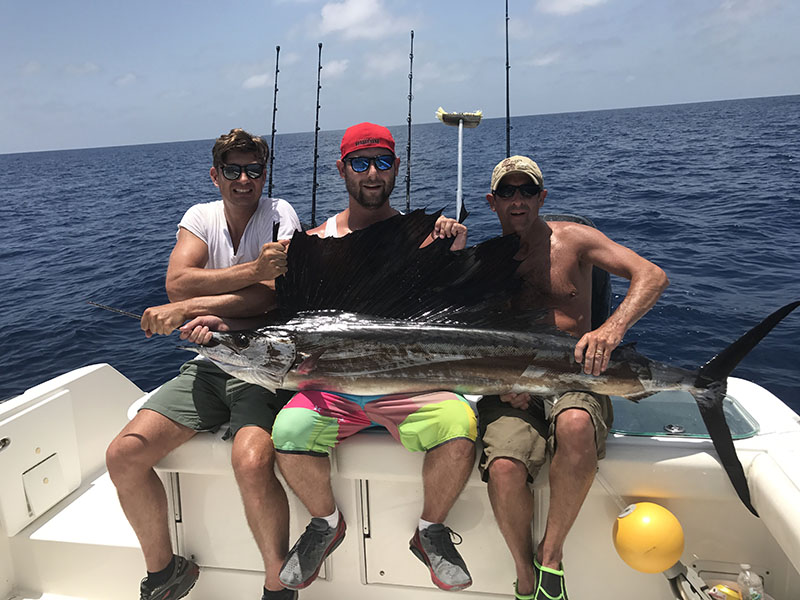 David Wissler, visiting Anna Maria Island from Ephrata, Pennsylvania, along with Caleb Horst and Doug Horst, both of Palmyra, Pennsylvania, show off a sailfish they hooked on Memorial Day in 120 feet of water off of Anna Maria while on a charter fishing trip with Capt. David White. White said it was “a catch of a lifetime” for the Pennsylvanians and for him, too! 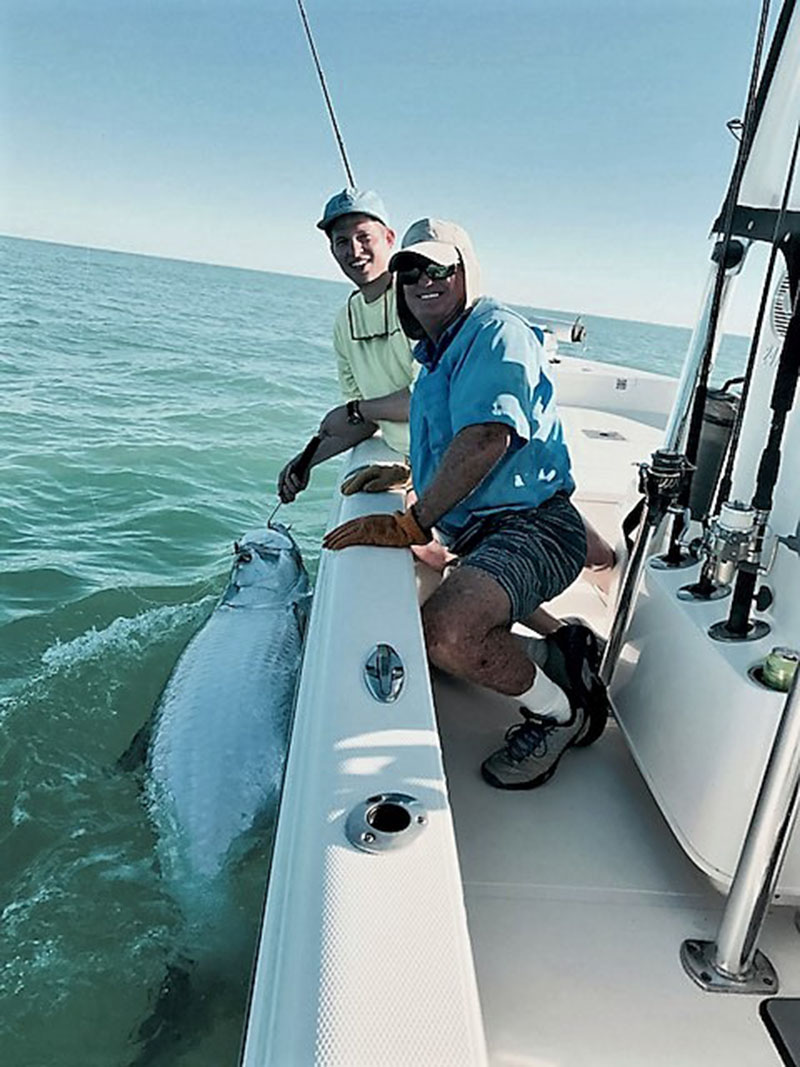 Chris Burwell, visiting Anna Maria Island from New Jersey, shows off his first ever tarpon hookup May 25 with assistance from Capt. Warren Girle. Burwell had a morning charter and Girle set him up for success with pass crabs for bait.

Fishing around Anna Maria Island is finally falling into the true summertime pattern — although the official June 21 start of summer is two weeks off.

Tarpon are finally — although a little late — making a fair showing. The numbers of fish are increasing by the day.

Flats fishing for catch-and-release snook is providing great action for inshore anglers. Also coming to the hook inshore are numerous spotted seatrout as well as Spanish mackerel and bluefish. Finally, offshore fishing is really heating up. Reports of American red snapper are nothing short of exceptional, while gag and red grouper are being caught with regularity.

My fishing experiences on Southernaire fishing charters are filled with action. Fishing grass flats with depths of 2-3 feet of clear, clean water is resulting in rallies of snook. Morning sessions on the schooley-size snook are resulting in hook ups of 40-60 fish. Screaming drags are the result and anglers are smiling in spite of the closed season.

Fishing deeper grass is producing great numbers of spotted seatrout. Numerous fish just within the 15-20-inch slot are being caught along with a few larger fish. Jack crevalle, bluefish, ladyfish and Spanish mackerel are mixed in with the trout.

Fishing nearshore structure also is proving to be worthwhile. Mangrove snapper are finally starting to show in numbers around the reefs and wrecks. Most catches are 15-18 inches. Spanish mackerel, flounder and barracuda also are being caught in these areas.

Finally, last but not least, the tarpon are showing up in better numbers. I’m seeing numerous schools of fish in my travels through the passes at Bean Point, Longboat Key and Egmont Key, as well as along the beaches. Live pass crabs are working best as bait during the pre-dawn bite. Once the sun starts getting high in the sky, I’m switching to threadfin herring to attract the silver kings to the hook.

Capt. David White of Anna Maria Charters is targeting tarpon in the passes north and south of Anna Maria Island and along the beaches. Pass crabs or threadfin herring are White’s bait of choice. Fish up to 120 pounds are being caught and released.

Moving offshore, White is taking advantage of light winds and calm seas. While venturing out to depths of 120 feet, White is finding a variety of fish, including permit, blackfin tuna, red grouper and many different snappers.

The highlight of the week for White was a sailfish caught-and-released Memorial Day by clients David Wissler, Caleb Horst and Doug Hors.

In the backcountry, Lowman is working the deep grass flats for spotted seatrout and Spanish mackerel. On the shallower flats along the mangrove shorelines, snook are the dominant bite.

Capt. Rick Gross of Fishy Business Charters is patrolling the inshore reefs for a variety of species. Baiting the hooks with live shiners is producing Spanish mackerel, mangrove snapper, cobia and barracuda for his clients. Permit also are present in these areas, where they’re being taken on a jig or free-lined live crab.

Moving inshore, Gross is finding numerous spotted seatrout on deep grass during incoming tides. Spanish mackerel and bluefish are present in these areas.

Capt. Warren Girle is suffering from tarpon fever. Whether it’s morning, night, afternoon or evening, you’re going to find Girle in pursuit of silver kings. For bait, Girle is working with live pass crabs and threadfin herring. He says most tarpon charters are resulting in numerous tarpon hookups, with the average size range running 80-150 pounds.

Capt. Jason Stock is running offshore charters, resulting in a variety of species reeled up to the boat. Gag grouper and red snapper are the most dominant fish caught while offshore, although permit and goliath grouper are not uncommon.

Moving inshore, Stock is targeting tarpon. Most catches are 80-120 pounds with bigger fish in the mix. Stock also is putting clients on large hammerhead sharks with large baits — whole jack crevalle or bonito. He reports the hammerheads coming to the boat are in excess of 10 feet.