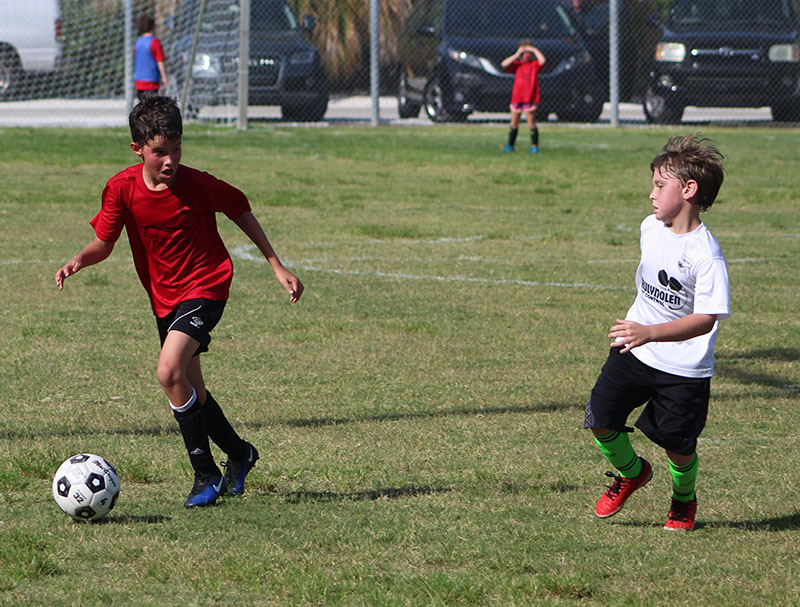 Truly Nolen and Progressive Cabinetry battled it out for 40 minutes May 30 in a back-and-forth affair that finally needed a penalty-kick shootout to decide a winner in the 8-10 division championship game at the Center of Anna Maria Island.

Truly Nolen never led in the game that ended in a 4-4 tie after regulation play had expired, but came through in the shootout to earn the victory.

Progressive jumped on top after 90 seconds of action when Keiran Cloutier threw the ball into Jackson Pakbaz, who volleyed the ball far post to give Progressive a 1-0 lead.

Truly Nolen responded two minutes later when Jack Mattick got loose on an end-to-end run that resulted in a corner kick. Mattick’s service bounced off the near post and Lincoln Sauls pounced on the rebound and poked it into the goal to tie the score at 1-1.

Progressive retook the lead at the 12:45 mark of the half when Pakbaz received a clearing pass from Fiona McCarthy at the top of the box. Pakbaz moved to his left and three times cut back until finally scoring from a tough angle to give Progressive a 2-1 lead.

With just over six minutes left to play in the first half, Truly Nolen’s Rylan Guerrero cleared the ball to Mattick, who made another end-to-end run before crossing it back to Chris Ueltschi, who one-timed it past Charlie Rogers in goal to tie the score at 2-2.

With time winding down, Truly Nolen was controlling the play and it appeared they would take the lead before the half came to an end, but Kieran Cloutier cleared the ball out to Ewing Cloutier. Ewing passed the ball inside to Pakbaz, who touched the ball once before firing a shot that beat Truly Nolen goalie Victor Albrecht for a 3-2 Progressive lead.

The second half was scoreless until the 12:36 mark. Truly Nolen was camped down in the Progressive end when Mattick pounced on a weak clearing attempt and poked it into the goal to tie the score at 3-3.

Truly Nolen kept up the offensive pressure and twice looked to take the lead. Nick Yatros intercepted a Progressive clearing attempt and sent it forward to Mattick, who settled, turned and fired a shot that caromed harmlessly off the post.

A minute later, Mattick intercepted a Progressive goal kick and fired a shot, but Rogers came up with the save.

Progressive finally gained some offensive traction and got Pakbaz the ball in space. He dribbled forward, drawing two Truly Nolen defenders before passing inside to Ewen Cloutier, whose shot was saved by Albrecht.

With 3:30 left to play, Progressive got a throw-in around midfield that went to Ewen Cloutier. He carried up the right side before passing back to the 14-yard line, where Pakbaz one-timed a rocket that beat Albrecht for a 4-3 lead with time ticking away.

Truly Nolen stepped up the offensive pressure, but it appeared they would run out of time. A seemingly innocuous throw-in somehow got in deep and, after bouncing around for what seemed like an eternity, found its way to Mattick, who volleyed home the game-tying goal with just over a minute left to play.

The remaining time quickly expired and the game shifted to end-to-end penalty kicks to determine a winner.

Pakbaz and Rogers both scored for Progressive in their first two attempts, as did Ueltschi and Nick Yatros for Truly Nolen. Kieran Cloutier’s kick clanged off the crossbar for Progressive, giving Truly Nolen an opening, but Ewing Cloutier saved Guerrero’s attempt to keep the game tied.

Progressive player Jack McCarthy’s penalty kick was saved by Mattick, who then stepped out of the goal to deliver what turned out to be the game-winner for Truly Nolen. Mattick then made the save on Lily Stringer’s penalty kick to give Truly Nolen a 3-2 shootout win.

Mattick led the Truly Nolen offense with two goals and two assists, while Sauls and Ueltschi had a goal each. Albrecht made four saves between the pipes for Truly Nolen, which also boasted Lily Kawahata, Tori Hurst and Liam Coleman as team members.

Jackson Pakbaz led Progressive with four goals while Charlie Rogers made three saves in goal in the heartbreaking loss.

After four games, Sato Real Estate is on top of the standings in the center’s adult soccer league — the only team without a loss.

Slim’s Place is a game back and alone in second place with a 3-1 record. Anna Maria CrossFit, Lancaster Design and Acqua Aveda follow in the standings with matching 2-2 records. Ross Built and Mulock Flynn Law hold down sixth and seventh place with 1-3 records, while Moss Builders is still in search of a victory in last place.

There was a full card of golf action last week at Key Royale Club. The fun got started May 29 with a Memorial Day Members Step-A-Side Scramble.

The team of Mal Hughes, Norma Hughes, Fred Meyer and Tom Nelson combined on an 8-under-par 24 to grab first place and clubhouse bragging rights for the day.

Later in the day, the men got out for their weekly modified-Stableford system match. Jack Connors, Lex Halakan, Art McMillan and Ron Vandeman all carded scores of plus-2 to finish in a four-way tie for first place.

The women took the course May 30 for a nine-hole individual-low-net match that included a side game of low putts for the round.

Phyllis Roe pulled a double, winning Flight A with a 3-under-par 29, while also carding a low 15 putts.

Flight B went to Sue Wheeler with a 3-under-par 29 while Carol Duncan, Penny Williams, Roxanne Koche and Sue Christenson finished in a four-way tie for second place. Fran Barford won low putts in Flight B with 16.

The men were back on the course June 1 for a nine-hole scramble. The team of Mark Kimball, Tom Nelson and Mike Pritchard combined on a 6-under-par 26 to grab first place. Second place went to the team of Mal Hughes, Jeff Rodencal, Chuck Patrick and Bill Shuman with a score of 4-under-par 28.

Register now for adult basketball at the Center

The Center of Anna Maria Island is accepting registrations until June 17 for its summer adult basketball league. Play will start June 27. Games will be played at 6:30 p.m. Tuesday nights.

Cost is $5 for members and $90 for non-members. Prospective players can sign up for team placement or register a team.

For more information, registration or to inquire about team sponsor opportunities, contact Will Schenerlein at will@centerami.org or 941-778-1908, ext. 9205.