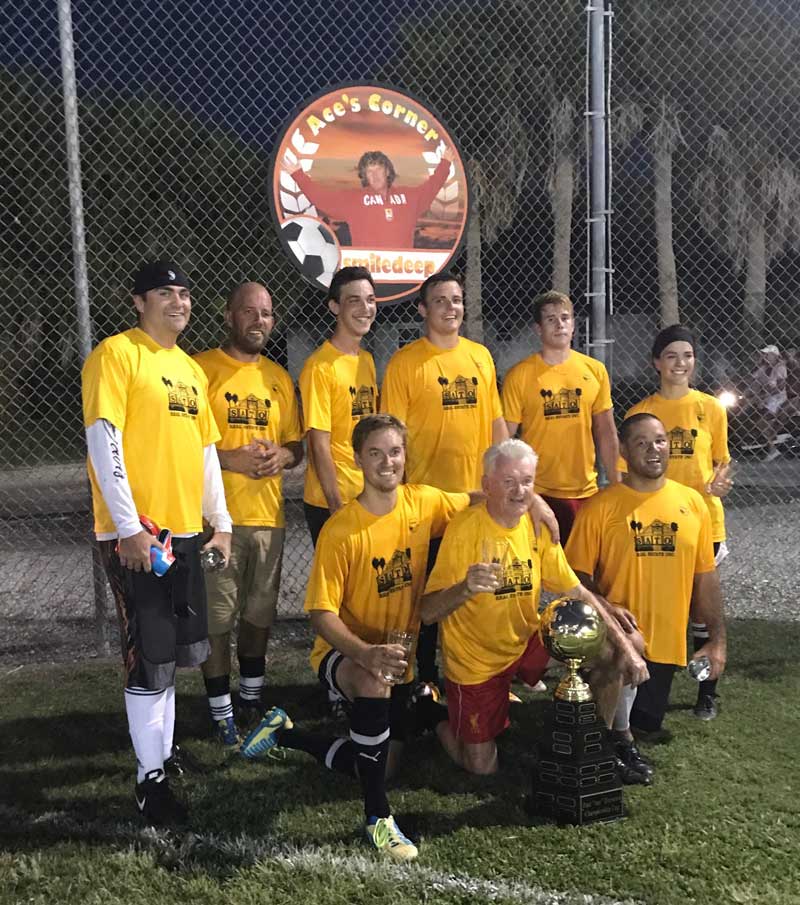 Sato Real Estate completed an unblemished season in the adult soccer league at the Center of Anna Maria Island July 6 with a dominating 8-2 victory over Moss Builders.

After rolling through the regular season, Sato Real Estate won three consecutive playoff games by a combined score of 23-5 to finish with a 10-0 overall record and the championship.

Kevin Roman and Jake Parsons both had two goals and an assist to lead Sato, which also received a pair of goals in the victory from Chris Klotz. Josh Sato and Lyn Clark added a goal each, while Adam Mott chipped in with an assist and goalie Jordan Demers came through with 11 saves.

Matt Kretzman and Diego Felipe each scored a goal for Moss Builders in the loss, while goalie Shawn McCarthy finished with eight saves.

For the second consecutive week, there was no need for a knockout round in the horseshoe action at the Anna Maria City Hall horseshoe pits.

Tim Sofran and Jay Disbrow were the only team to post a 3-0 record during pool play on July 5 and were the day’s outright champs.

Sofran was back in the winner’s circle July 8, this time partnering with Steve Doyle to post the day’s only 3-0 record in pool play for the win.

Play gets under way at 9 a.m. every Wednesday and Saturday at the Anna Maria City Hall pits. Warmups begin at 8:45 a.m. followed by random team selection. There is no charge to play and everyone is welcome.

Key Royale Club members played an Independence Day scramble July 1 to get the celebration started for the holiday. The competition was tight as the team of Dave and Debi Richardson and Jim and Joyce Lathrop, along with the team of George and Fran Barford and Debi Wohlers and Tom Nelson matched the 6-under-par 26 carded by the team of Charlie and Kathy Porter, Jana Samuels and Tom McDonnell for a three-way tie for first place.

Other winners included Nelson for the long drive and Wohlers in the women’s long-drive contest.

Wohlers also captured the closest to the pin for the women, while Dave Richardson won for the men.

After the golf, the members enjoyed a seafood buffet in the clubhouse.

The men played their regular Monday morning modified-Stableford system match July 3. Art McMillan grabbed first place with a plus-3, while Lex Halakan, Nelson and Ron Vandeman tied for second with matching scores of plus-2.

The men were back on the course July 6 for a nine-hole scramble. The team of Mark Kimball, Nelson and Vandeman torched the course with a 7-under-par 25 to claim clubhouse bragging rights for the day.

Cost is $125, which includes a jersey, shorts and socks. Players who register before Aug. 1 receive a $15 discount. There is an additional $20 volunteer fee for MAYSO players that is reimbursed if the player volunteers for two hours.

For more information, contact a MAYSO administrator in an email to info@mayso.org or go online to mayso.org.